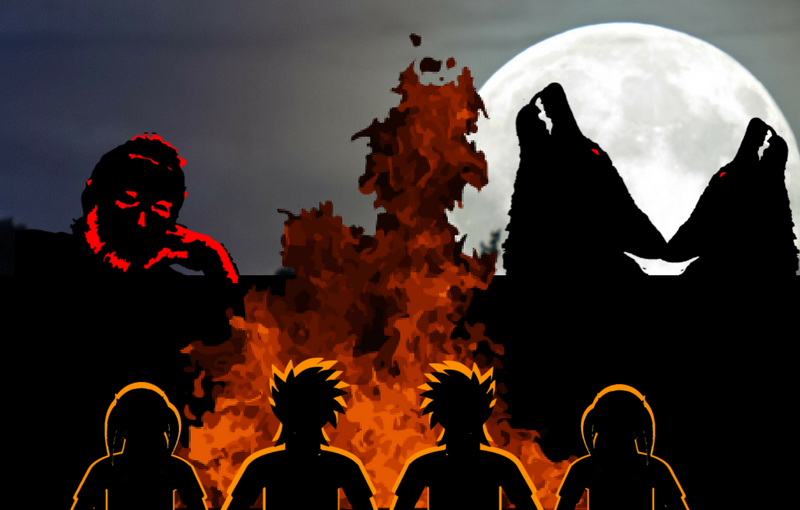 A long, long tie ago, before time was recorded, there was a tribe. Where they were doesn’t matter but they were surrounded by a dense forest. The wolves lived in the dark forest and preyed upon any unsuspecting weary traveller who should happen to stray off the beaten path alone and unarmed. These wolves were cunning and cruel and took many a villager in the deep shadow of the haunted night.

Over the years more and more disappeared, brought down by their mighty jaws. When fifty villagers had been taken by the beasts as they crossed the woods to trade with the neighbouring tribes, the chief knew that this could not continue, that something must be done against the wild animals that hunted them.

The wolves grew ever bolder and ever more ferocious. The men wanted to take torches and go to the woods and slay the devils of the night that had taken their brethren and their children. But the canny chief of the tribe knew that with the torches and the men, the wolves would never come out in the open. He was all too aware that they could move much faster than men ever could. It was sure be a fruitless quest.

So, what did he do? He called all the tribe around the fire as the sun fell, and he told them a tale of his own devising. It was a tale about a lonesome boy that was lost in the woods at night and that because he strayed alone and off the beaten track, the dark things of forest took him and consumed his soul. He was never seen again. And with that, the art of storytelling was born.

No other person from the village was ever eaten by a wolf again.

Our ancestors going back forever, to the dawn of humanity, used storytelling as a means for an education. To visualise very real dangers and show moral guidance in a way that is easy to digest and that is entertaining. Through the ancient art of storytelling, every single one of us has learned valuable lessons that we carry with us through our lives.

I see it as my duty to tell my stories in an enlightening entertaining and enchanting way, that sparks imagination, ignites wonder, educates and sometimes, it just makes you laugh. Though the stories are different the ancient principle is still the same.

Barry S. Brunswick is an author. You can buy his books on Amazon:
Dreamland Part 1 – The Fabric of Dreams
Dreamland Part 2 – The Masters of Light
The War of The Turnips
Barry Brunswick’s Tall Tales – A Short Story Collection
Inner Outer – A Poetry Collection

This website uses cookies to improve your experience while you navigate through the website. Out of these cookies, the cookies that are categorized as necessary are stored on your browser as they are essential for the working of basic functionalities of the website. We also use third-party cookies that help us analyze and understand how you use this website. These cookies will be stored in your browser only with your consent. You also have the option to opt-out of these cookies. But opting out of some of these cookies may have an effect on your browsing experience.
Necessary Always Enabled
Necessary cookies are absolutely essential for the website to function properly. This category only includes cookies that ensures basic functionalities and security features of the website. These cookies do not store any personal information.
Non-necessary
Any cookies that may not be particularly necessary for the website to function and is used specifically to collect user personal data via analytics, ads, other embedded contents are termed as non-necessary cookies. It is mandatory to procure user consent prior to running these cookies on your website.
SAVE & ACCEPT