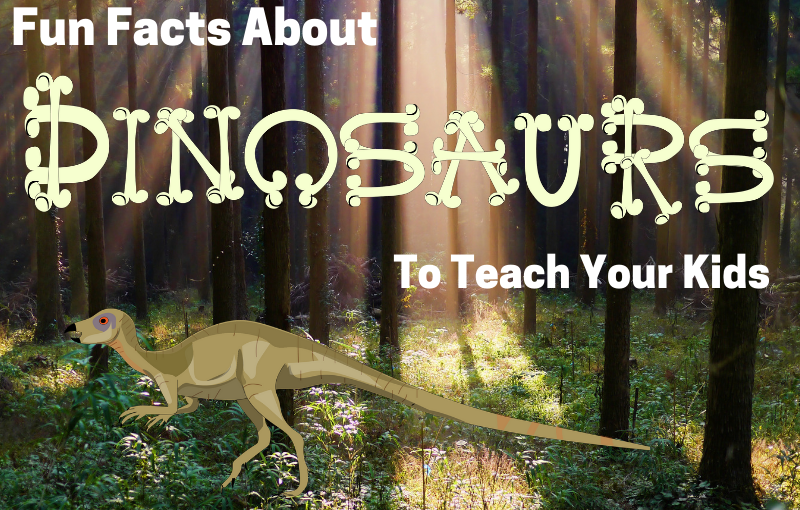 Who doesn’t love a dinosaur? I mean, the thought of real-life monsters roaming the real-life earth millions and millions of years ago. As for me, I’ve been fascinated by dinosaurs ever since I was little and your kids probably are to. So here are some fun facts about dinosaurs to teach your kids and the answers to the questions your kids will ask about dinosaurs.

What was the Biggest Dinosaur Ever?

This is the first question that anyone would ask once they have an awareness of what a dinosaur is, and the answer is both fascinating and mind-blowing.

Argentinosaurus Huinculensis is quite a mouthful so we’ll call it, Argentinosaurus for short. It was a long-necked herbivore that lived about 65 million years ago in Argentina. This whopper could weigh somewhere around an estimated 100 tons and was a gargantuan 40 metres in length and 20 metres tall. To put that into context a small car weighs about 3 tons, and a city bus is 14 metres long. Wow that’s big!

Argentinosaurus was a type of dinosaur known as a sauropod. They were perfectly adapted to eating rough foliage from the trees of the late cretaceous period.

When talking fun facts about dinosaurs to teach your kids, everyone’s favourite dinosaur is the mighty and legendary, Tyrannosaurus Rex or T-Rex to its friends. So, the next question is…

How Many Teeth Does a T-Rex have?

A T-Rex could have more than 60 bone crushing teeth, that measured up to a scary 9 inches, that’s nearly 23 centimetres! That’s one scary mouth full of certain doom.

Of course, you can’t have set of gnashers like that without having an enormous head to carry them in and these really were big-headed, and I don’t mean arrogant and boastful, with a skull that could measure up to 1.5 metres in length.
They lived around 65 million years ago in the valleys of North America. Recent studies have shown them to have been a pack animal that lived in family groups. Far from the solitary killing machine that is depicted in the movies.

Did you know that a fully grown T-Rex stood 6 metres tall and 12 metres long. That’d make a snack out of most of the animals of the time.

Which Dinosaur Has the Longest Horns?

This herbivore had massive bony horns that measured nearly 1.5 metres long and a unique shorter rounded horn on the nose, different from the more famous triceratops. The armoured frill had bony spikes around it making this a meal not to be messed with.

The whole creature is estimated to have been close to seven metres long and nearly 2 metres tall. Imagine a rhino carrying those horns charging at you!

Fossils have been found in Mexico and it is estimated they walked areas lush with vegetation around 70 million years ago. Pre-historic salad to go!

Now for the next stop on the list of fun facts about dinosaurs to teach your kids we need to take to the air.

Which Flying Dinosaur Has the Biggest Wing Span?

And the answer is…Quetzalcoatlus Northropi.

Quetzalcoatlus which is considered the largest is a member of the ridiculously spelt pterosaur family, which includes the famous pterodactyl, pictured below (Does anyone else know any words that are spelt with a P and pronounced with a T?).

They had a ridiculous wingspan of around 11 metres. It is estimated they stood nearly 3 metres tall and weighed a humongous 250kg. Wow! There must have been something in the water in North America during the late cretaceous period. Just as a guide, that made it almost as tall as an elephant. Leaping lizards or at least soaring reptiles!

The Quetzalcoatlus is thought to be the biggest animal that has ever flown.

Now last on the list of fun facts about dinosaurs to teach your kids about we’re not forgetting the little guy.

How Small Can a Dinosaur Be?

A fossil discovered thought to be the smallest dinosaur ever found was a bird-like dinosaur that measured a mere 40cm in length. It was roughly the size of a chicken. The species known as Maniraptoran is a contender for the smallest dinosaur ever. The discovery came from a single tiny neck bone found in the U.K. from which scientists made the estimate on size. It beat the record from a Chinese specimen which was also bird-like, Anchiornis. It lived in the Cretaceous period.

Other small dinosaurs include the North American Hesperonychus elizabethae, a small velociraptor type creature with a slashing claw on its toe. It grew to around 50cm long. The Compsognathus was another titch that grew to around a metre and lived in the Jurassic period, pictured below.

I think it’s safe to say, in a land of giants it must have been hard to be small.

We chickens are distant relatives of dinosaurs.

Check out my blog next week or sign up to my email list for some wacky fun and new releases.

I would like to thank Live Science and the National History Museum for their amazing content of really fun facts which helped me in my research for this blog.

3 thoughts on “Fun Facts About Dinosaurs to Teach Your Kids”