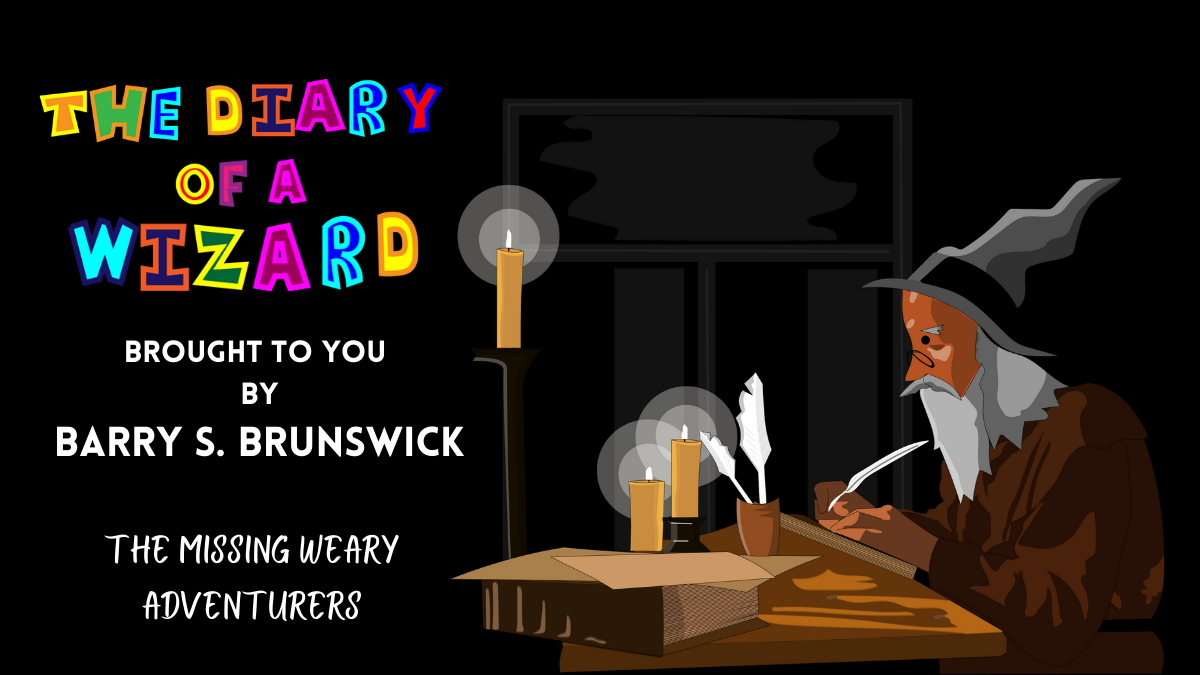 Hey friend! Welcome back to the best blog of magical mayhem and weird yet wondrous whacky wizardry. This week a weary adventurer has gone missing, and that seems to happen a lot in The Enchanted Woods, so this is a job for meeeeeee.

The Missing Weary Adventurers: Day One

I suspect some trickery here. He was last seen by the rock that’s shaped like a cheeseburger. I summoned my trusty magical steed Billy, the oversized talking cockney mountain goat, and with no time to dilly dally, I grabbed my staff and pointy hat and set off with much haste.

We galloped right through the day and found a nice little cave to sleep in. What we didn’t realise was this is where 2 black bears meet up for date night. I magicked up two massive pots of sour cream for them, as long as they agreed to share the cave tonight, and I dunno, not eat us or something. Who would have thought bears like dairy so much?

We caught 73 winks snuggled in with the warm bears. They smell, but they’re warmer than a burning blanket on a boiling beach in the Bahamas I can tell you.

We headed out and ran like the wind, well, like a wind was blowing in our faces the whole time, making us go really slowly at least. The first port of call was the woodhag. She’s a bit like a seahag but she lives in the woods, not the sea. She is a knower of a great many things if you can get her to tell you, and more importantly, you can resist her hypnotic witchery, which only a wizard can.

She tried to give me a potent and powerful pungent potion instead of a cup of tea, but I was onto her wicked and witchy ways and when she wasn’t looking, I poured it in her house plant pot. The plant exploded into instant ash with a puff! I must say, I’m glad I didn’t drink that in the end.

She told me that it isn’t just one weary adventurer that’s vanished, but over the last 13 years, a great many have. You see the problem with weary adventurers, is they go wandering without really anyone knowing who they are or where they come from, so if one goes missing no one tends to notice.

They are always last seen at the rock that looks like a cheeseburger, and that edges onto The Rickety Bridge, and on the other side of the bridge is bridge troll country. I’m starting to wish I’d brought my sword.

We stayed the night with the woodhag who prefers to be called Doris, and we’ll head off bright and breezy in the morrow.

I was awakened by Doris doing a strange incantation over the top of me with a load of chicken bones and some burning herbs of some kind, I felt a bit funny. I quickly made my excuses and left before she enchanted me or something but within moments I was stuffing my face with junk food.

We rode through the morning and finally reached the rock that’s shaped like a cheeseburger. As the trees narrowed out, a deep and mighty gorge was revealed, and that was where we found The Rickety Bridge. This is certainly not just a clever name, it looked like it was made of cardboard, but I had little choice but to cross. I left Billy behind as I wasn’t sure I could chance both of our weight on it, and made my way across alone.

Midway into my white-knuckled swayey journey, a strange mist descended, and I was almost totally blinded.

Eventually, although at pretty much every moment, I felt like I was going to die, I reached the relative safety of solid ground. I say “relative” because, solid ground it may have been, but this solid ground was in bridge troll country. I climbed a tree for safety and slept there. I’ll start my search come morrow, when the sun is shining and hopefully it isn’t as misty.

The mist had cleared by dawn’s crack, and I got down from the tree. The morning is safer when it comes to trolls, cos if they get hit by direct sunlight, they turn to stone, which is kinda restrictive considering they are creatures of fantasy if you think about it. Maybe that’s why they spend so much time on Twitter, I dunno. I walked on through the rocky landscape until I happened upon a cave. There was a huge wooden door in shadow, on the entrance, and upon the huge wooden door there was a huge wooden sign that read: “7 Goblin’s Diner. Open 7 days a week, (that way we have a goblin for each day, ya see).” I knocked on the door.

An angry looking troll answered, and was safe with the doorway perfectly shaded to stop the sun getting in.

“I’ve come to have lunch.” I announced, and the troll let me inside.

It was as depressingly dingey and as dank as a darkened dungeon, and all around were bridge trolls, and goblins and other smelly things. A goblin welcomed me in, showed me to a table and handed me a menu.

The very first item on the Mains Section of the menu, was a dish called Roasted Adventurer Leg. Now call me a doubting Thomas or even a questioning Quentin, but this could be a clue as to where the weary adventurers have been vanishing to. I called over the waiter and demanded to speak to the manager.

I had no time to be beating round bushes so I asked, “You wouldn’t happen to know anything about weary adventurers going missing, would you?”

“Erm, it’s just you appear to have Roasted Adventurer’s Leg on the menu.”

“Well dun’t ya worries, cos I’m sure and certain there’ll be another one along soon, kicking in the doors of honest goblin’s hovels, accusing us of stealing their tasty chickens and sheeps and childrens.”

“Goblins do tend to do that but now you’ve given yourself away. So, you do know about the missing adventurers?”

“Nah, you gots no proof of that wizardy, bones ain’t proofs they ain’t.”

“They kinda are though.”

“Wells, if advenurers are ‘umans and they can eats chickens and pigs and stuffs, why can’t we eats ‘umans then clever clogs?”

“That’s actually a very good point! I can’t argue with you there,” I declared. “I guess I’ll order up 1 Roasted Leg of Adventurer then please.”

I ate a hearty meal and slept right in the chair the whole night through.

I woke up bright and breezy and ran back across The Rickety Bridge to go and meet Billy. I better get a wriggle on if I’m to get back in time to write some cool stories for you.

We made good progress except for getting caught in a human-sized spider’s web. I turned the spider into a harmless leaf bug so we could escape, but don’t worry, it’ll turn back after we are long gone.

We told stories into the night and then slept beneath the stars.

After an early start, we finally made it back to mine by sundown which gave me just enough time to have dinner. The goblins gave me a goodie bag from the 7 Goblin’s Diner, so when my belly was stretched to bursting, I caught 79 winks in my own comfy bed for once.

Well, it’s been quite the week and if I learned anything at all, it’s that the same rules don’t apply in The Enchanted Woods as do in the human world. You can’t just trapse through bridge troll country willy nilly without a risk of getting killed, chopped up, roasted and eaten, and if you happen to be a free range, organic weary adventurer, you’re gonna taste best of all, so your chances are limited.

My best advice to you humans is, if you can’t take the heat, stay out of the meat hanging fridge of a diner run by goblins.

Now as always, I’m gonna write some cool stories for you. I hope the week finds your smiles many and your worries few.