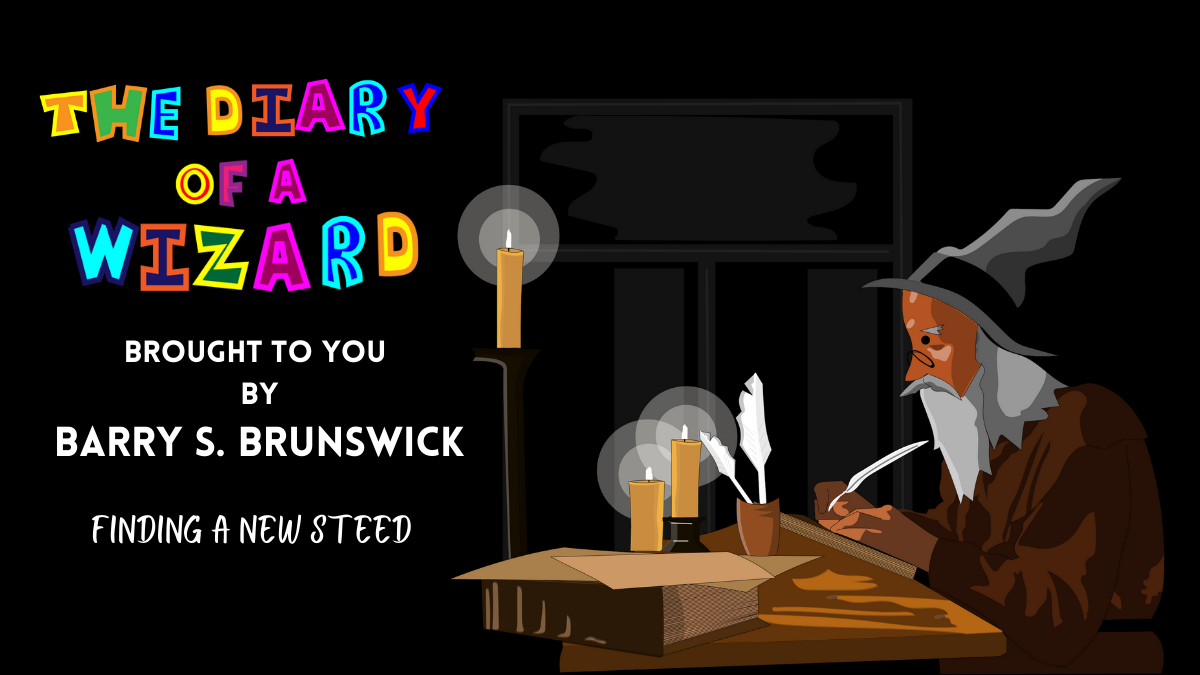 Hey friend! Welcome to the best blog around. Yay! This week I have to get busy and find a new steed. No wizard can afford to go steedless for long and hopefully this one’ll be a bit more trusty and maybe even more magical than Horace was.

Finding a New Steed: Day One

I’ve been feeling low since the breakup. Feels a bit weird without Horace. To be honest I have no idea why, I mean it’s like it has been for ages, he’s not around and I need a steed, so really nothing’s changed. I guess it’s just the finality of it.

Something I know’ll cheer me up a bit is trying to find a new steed. I mentioned last week [click here if you didn’t read it] that I would need to put an advert out. Most people would use the local paper or Google Ads, but I’m a wizard, and that’s pretty boring, so what I’ll do is some wondrous wizardry, and put a magical ad in the sky!

Minus the two secret ingredients it goes something like this:

Seven-year turnip,
Some splotchy root,
A golden acorn, and a pickled newt
A scorpion’s tail
And a dribble fruit

Cook it all up
Til it stinks out the home
Stir it around
Chuck in a crow
Say the secret words
And watch it explode!

Of course, I was gonna do it in a rhymey wizardy way. It’s just the way I roll!

I excitedly released my potion this morning, beautiful environmentally safe, spell smoke, bright red, high up in the sky. Potential steeds will be able to see all over the kingdom. I did it in the form of an animation cos I really don’t think a steed being able to read is a priority.

They will come and meet me on day four of this week.

That gives me enough time to write some cool stories for you. Yay!

Today I need to prepare for the steed’s arrival. I have prepared a list of questions and an important test. So now all I need are some snacks and then it’s just a waiting game. I hope I find one because honestly, I need to get this out the way. I don’t want this process going on for weeks.

I came up with 3 questions:

I’m not against an inexperienced one, but the first two questions should get rid of most of the unqualified hopefuls.

Then I will make them do a test. The test is a simple one, just a race to the mountains with a life sized and weight wizard mannequin on their backs.

There was a fair crowd in the clearing in the woods this morning, potential steeds had flocked from all around the kingdom. Most of which were farm animals, so my first question: “Are you magical?” sent most of them packing right away. Very few animals can answer a question at all. This left a field of 7. There was a dragon, a flying horse, a dinosaur, a horse-sized dragonfly, a griffin, an elephant sized-eagle and an over-sized cockney talking mountain goat.

I got immediate warnings about certain traits of said creatures. Dragons are pretty selfish, flying horses arrogant, dinosaurs eat too much, griffins are cool but only the size of a monkey, Horse-sized dragonflies need to eat a gazillion mozzies a day, elephant-sized eagles need to eat an elephant a week and over-sized cockney talking mountain goats can be grumpy.

I got them to do the race and the dragon won, followed by the flying horse, but the mountain goat came in third and that’s impressive when he can’t even fly. I told tell the others to go. The recruitment process is harsh on those that fail, so it was hard to tell them. I was half tempted to do it via text, tonight, but of course, I had to tell them to their face.

All that was left was the interviews, but I told them to come back in the morrow. The final candidate shall be chosen then, and I will be steedless no more.

The interviews were telling today. I asked the first question, and each had a chance to answer. The question was simply: “Why do you want to be my trusty magical steed?

The dragon said, “For the gold, and to burn villages, then to take the gold that they have in them,” in a serpent-like hiss.

Yeah, not ideal there pal. I may be called to slay you at some point in the near future I should imagine!

The flying horse said, “It’s all about glory for me, I mean who wouldn’t wanna be a hero? And you would look magnificent upon my back, I mean, look at my glowing mane, my flowing tail, and my silky coat.” He did a kinda neighy thing on the end.

Yeah, not really what this is about mate. You don’t wanna do some steeding, you wanna look at yourself in the mirror by the sounds of it.

The goat said, “Alright me old china plate? I love steeding! It’s totally mustard bruv! I studied steedary in uni. I wouldn’t mind hanging out with a snowy blizzard like yaself either. We’ll have a riot, a right bubble bath, I tell ya me old mucker.”

With that utter nonsense Billy, the over-sized cockney talking mountain goat was hired.

He’ll start in the morrow.

Billy came over for brekkie and we’ll just spend a couple of days hanging out. You know, a bit of getting to know you stuff. I mean being a cockney I can’t understand most of the things he says, but he seems nice enough.

Had to have a little ride on him and boy is he nimble! And his massive horns are great to hold onto. I didn’t want to push him too hard as I know it won’t be long before my wizardy, or snow and blizzardy as Billy would say, adventures are on again. I have a feeling next week maybe. Wink!

We had another ride and hung out all day, but I did find the time in the late eve to write some cool stories for you. YAY!!

Right, that’s it from me and Billy for one week.