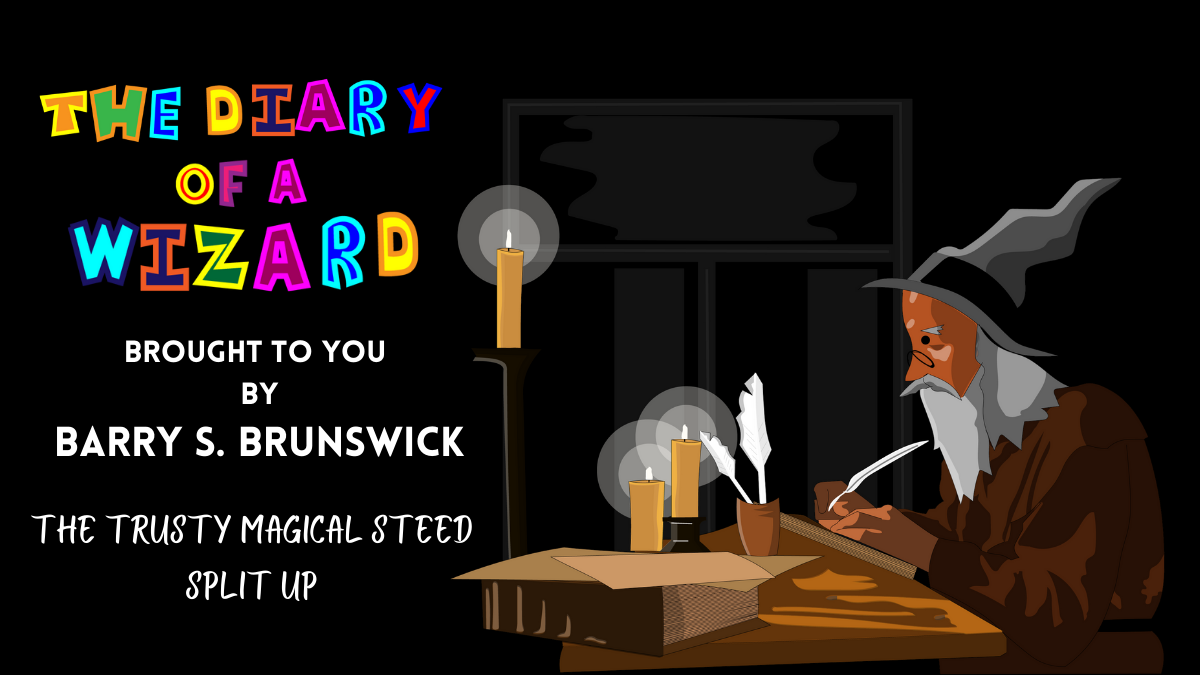 Hey friend! Welcome to the best blog about wizardy things. This week I’ve reached the end of my tether. Me and Horace have got to have stern words I’m afraid. He’s just taken this too far. I mean we’re on week 17 and he only took me 100 metres in week 5 when I had to negotiate a peace deal. Wish me luck!

I woke up bright and breezy feeling kind of fresh. For once I had no frantic sweaty riders, message crows or mystic mind messages, to send me on a deadly quest. I did have a strange ominous feeling though, knowing it’s come to a head, and I’ll have to talk to my not so trusty magical steed Horace. It simply can’t wait any longer.

I searched all afternoon for him or the ponies, but they were nowhere to be seen. So typical my steed that never goes anywhere, has indeed gone somewhere. I do despair.

This means I’ll have to turn to a bit of wondrous wizardry, some detective work, and of course, some boot leather. That can wait til the morrow though.

Well I tell ya, this is harder than some of my quests. I went out looking for Horace, looking for tracks and the like, and I found them alright. I found Horace too but every time I got near him and yelled, he ran a bit further away. This is the kind of thing, that I’m talking about. It’s all fun and games, but we had an agreement that he is not sticking to, and I do detest agreement unstickery.

And if that unicorn thinks he can outwit a wizard, he’s got another thing coming!

Horace did indeed outwit a wizard, and after a 17-hour search, I got home. I’m more beaten than a beatnik’s badger skin bongo, and you know what? He was sitting there with two ponies watching the qualifiers for The Woodland Games at home. I have to say I nearly blew my hat! The fact I’d been out all day and into the eve and he was here! I’ve been attacked by a cave troll, had to tangle with a jigging jackal, got stuck in quicksand and bitten by dart-nosed mosquitoes looking for him.

I asked him to stay around because we need to have a serious chat. He agreed but he did look a little worried.

Horace brought me a cup of tea in bed this morning, a most unusual happening. I suspect trickery or at the very least, sucky upness.

We sat at the kitchen table for an hour. It was hard for me to tell him off, we used to be so tight, we used to have so much fun, but things have changed. I had to tell him to buck his ideas up. He claimed he didn’t know what I was talking about. And that was it, I had a ragey red faced rant.

The look on his face broke my heart, and the tears in his eyes.

I explained that he needs to be a free unicorn, and it seems steeding is no longer for him.

“But steeding’s all I know!” he said.

And with that, he went out the door. I don’t know what to do with myself now.

Felt horrible last night and this morning, can’t stop thinking about Horace but alas, I know I’ve done the right thing. I need my steed to be trusty.

I moped around for a bit, tried to write some cool stories for you, but didn’t really feel like it. Sigh.

I cheered myself up a little by playing cards all day with the wise old owl that sits outside my window sometimes. His name is Burtie. He beat me and won plenty of shmekles from my purse, so I called it a night.

I managed to write some cool stories for you as well which means things must be a little brighter!

So, looks like now I need a new steed. I’ll have a little think about that. I need to put an advert in the sky, you know, to get the biggest reach.

I’m gonna write some cool stories for you now.

The thought never escaped my mind however, I hope Horace is okay.

2 thoughts on “The Diary of a Wizard – Week Seventeen”