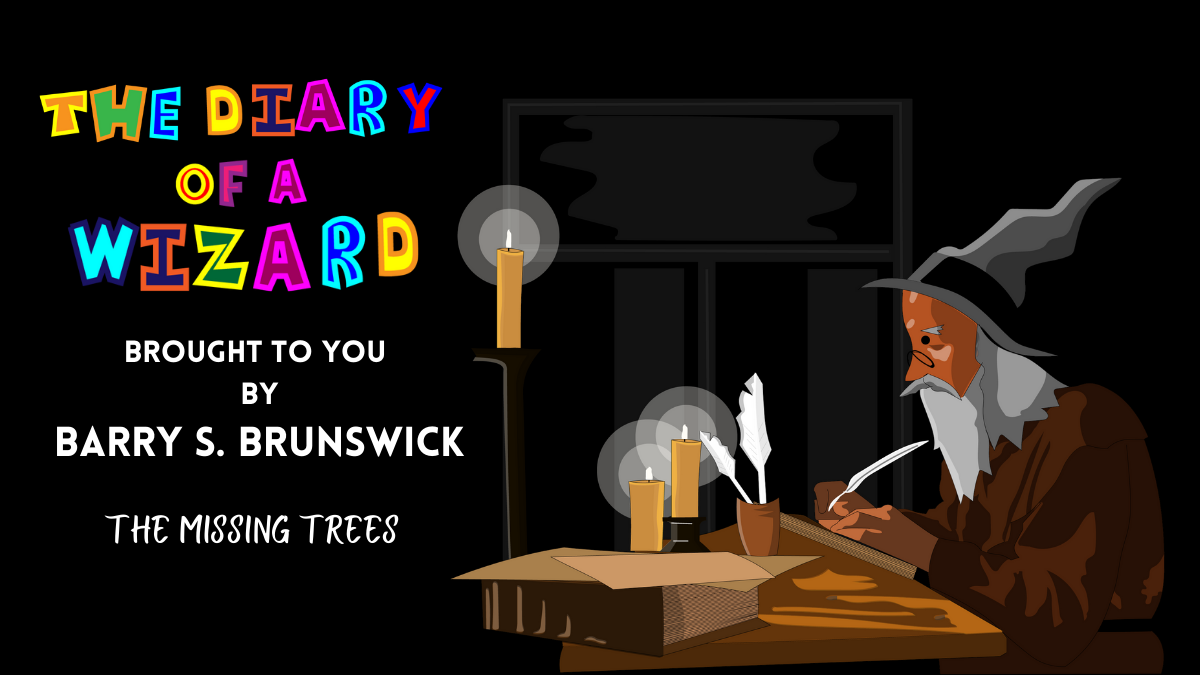 Hey friend! This week in the best blog for magic and laughs, some of the trees in the enchanted wood have gone missing. This sounds like a job for me!

The Missing Trees: Day One

5 squirrels came to my door this morning and they were frantic. Obviously, squirrels don’t speak English, so I had to use a translation spell. It turns out the poor little blighters have lost their homes in the tall trees by The Babbling Brook. I better check it out.

I summoned my new trusty magical steed Billy the over-sized cockney talking mountain goat and within the hour the squirrels were looking for a new place to live and we were on our way.

It’ll take two days to reach the area, so we’ll be sleeping under the stars tonight.

Woke up bright and breezy and hit the dusty trail. Going was very slow today due to a massive downpour of chilly rain. The trouble with downpours in this part of the Enchanted Wood is the dog-sized sludgy slugs come out. Most slugs are slow and eat plants, these slugs are pretty quick, and eat meat. Most particularly they love eating the meat from weary travellers best. Billy proved his worth and expertly took to higher rocky ground. The slugs couldn’t get us there.

Finally, the downpour stopped well, pouring down and the slugs went back into hiding under the ground where frankly I’d prefer it if they stayed all the time. I was wetter than a walruses’ waistcoat on a Wednesday wash day.

Where I’m camping for the night, there’s some wolves around so I’d better be wary. Should make the Babbling Brook in the morrow, noonish.

I managed not to get eaten by wolves which was a result although somehow, they got close enough to pee on my staff and my hat. I bet they think they own me now. So, after washing them down, I hit the trail a little later than expected.

Made it to the area just after noon. It’s true so many trees have been cut down. It’s heart breaking, so many wise and ancient trees that tell their stories to the wind are gone.

I’ll have to find the culprit quickly and stop them from doing this. The Babbling Brook is called that because it babbles endlessly so it pointed me in the right direction.

I searched the area all afternoon and just as it got dark, I saw where the trees must have gone. I’ll wait til dawn’s crack and get ready to deal with this mess in the morrow.

I approached the big wooden fence early and let myself in through the gate. All I could hear was singing. It was going:

“Nothing makes a Wood Pimp pleased
Like chopping down all the trees
If you need some wood for a project planned
Then Wood Pimp, Wood Pimp he’s ya man”

Then there was a chuckle before the song started again. That’s when I saw him, wearing green tights, a greener tunic and one of those weird Robin Hood style hats with a feather in it.

“Okaaaaay, in The Enchanted Wood right? Where all there is, is wood, yeah? The clue is in the name, ‘Woods’.”

Turns out he doesn’t sell wood at all, that’s like trying to sell sand at the beach. He just gets off on cutting down trees. I had to give him a stern warning. That he can take his wood and sell it to humans, in the places humans live, but if he should ever return and do damage to another tree a terrible fate would befall him.

“W…w…will you kill me? You wouldn’t kill Wood Pimp would you?” he nervously asked.

I just smirked which certainly had him shakily scared like a cowardy custard. I wasn’t gonna tell him that I’d turn him into a hedgehog. It’s better if he thinks I’ll kill him even though I’m certainly not the killing type as you know.

Anyway, Wood Pimp says I can stay the night, so I agreed to help him in the morning.

Woke up with a fuzzy head. Wood Pimp sure loves to party. I set to work and got him two shire horses to help as a personal favour and a huge cart. With a little wonderous wizardry I levitated the first load on the cart and with that, Wood Pimp trundled off. It made me laugh the fact that there will be at least three other loads and it’ll take him days to get out of here.

Now he may be the Wood Pimp but nearby is a vicious band of wood imps that have been having murderous thoughts and I’ll have to persuade them not to cook and eat Wood Pimp because he’s leaving. Luckily, I got here first.

They reluctantly agreed and I jumped up on Billy and we started to make our way home safe in the knowledge another disaster has been averted in the woods.

I camped out under the enormous bluebells. I like to sleep there when I can, they always ring in the morning like an alarm clock.

I got attacked by some ill-tempered field mice first thing this morning, they were pretty disgruntled and somewhat deturbed. Who can blame them? If you really think about it, they’re called “field” mice, and they’re in The Enchanted Wood not a field. Anyway, they just needed a nice cup of tea and a talk about their problems. We decided they should hitch a ride with Billy and I cos the field is way closer to my place.

Dropped the mice off with clear directions, now they just have to hope they don’t get munched by a rodent eagle. I guess I’ll never know. Good luck little tasty morsels!

Made it home in time for some dinner, I made some for Billy too. Boy can that goat eat! He’s been amazing on our first adventure though so it was the least I could do for him.

Woke up bright and breezy and gave Billy the day off this morning. You know why? Cos sometimes you have to wonder, what wizard ponders or where he goes on his adventures. And sometimes you’ve gotta write some cool stories for people.