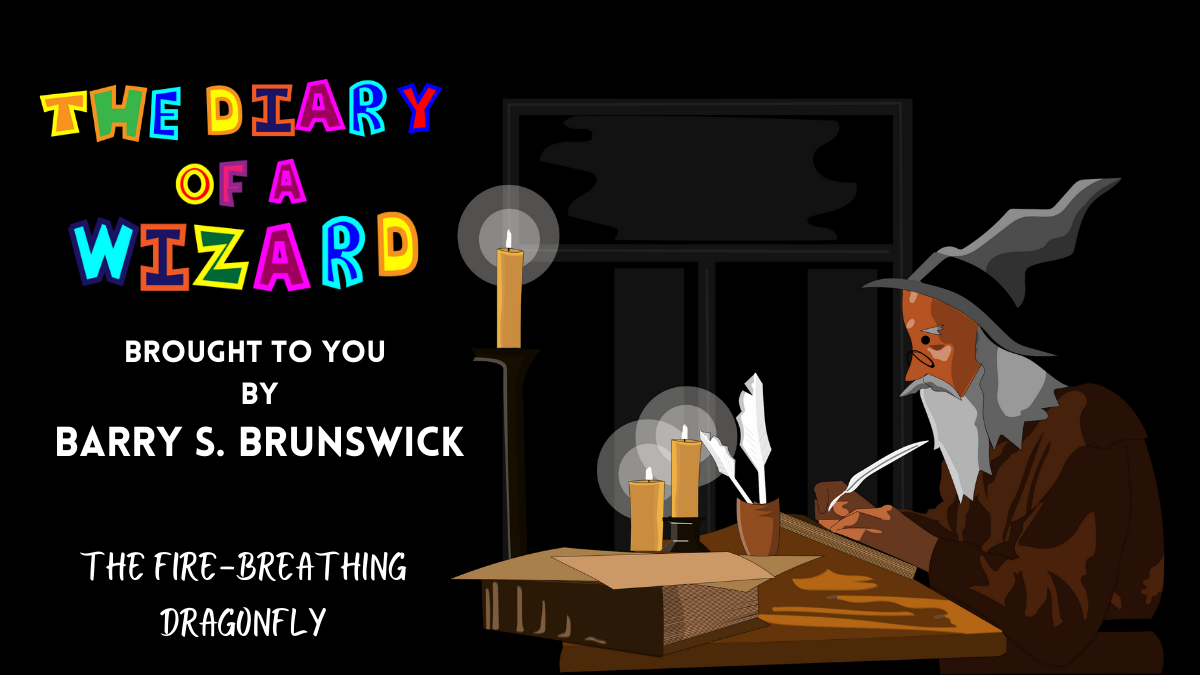 Hey Friend! Welcome to the best blog about the happenings of wizards. This week I’ve had a report of dragon fire in The Village at the Edge of the Woods. Sounds like the village folk are as jumpy as a jiggly jack rabbit about it. I’d better see if I can assist in any way.

The Fire-Breathing Dragonfly: Day One

Got a mind message from the Grand High Wizard this morning telling me that the clock maker’s shop had been burned to the ground by a fire-breathing dragon. I must get to The Village at the Edge of the Woods at once.

I hated to point out to him that he lives a mere 2 hours away and it’ll take me a day and a half to get there, and the fact he is far more powerful than I, and would be better equipped to stop said dragon, and it would be far easier if he went instead. He ragily red-faced ranted for a few and it turns out he would rather I got barbecued or turned to instant ash than he did.

My trusty magical steed Horace was feeling a little poorly, it’s better he gets some bedrest, so I persuaded one of the ponies to take me.
I had to pack my sword for this trip, and I do hate violence, but dragon’s can be a little nasty. Just as well I packed the marshmallows too for roasting to make up for it. Dragons do have their uses.

I’m just camping for the night now, should be there about 1.46 in the afternoon, to have a rough estimate.

I was delayed today so my estimate was off. We finally made the village at 1.48. The delay was due to being attacked by a bunch of ape men. They’re like apes, but kinda like men, wearing hats and shoes and the such. Anyway, I didn’t really deserve them trapping me in a net and jabbing at me with spears. I cut the net open with my sword and reigned fury upon them, by turning them into tumble weeds. They rolled off with the breeze, but don’t worry they’ll turn back once they have rolled far far away.

The village was frantic when I met them in the village hall. They greeted me as a hero. They were talking of forming an angry mob, with burning torches and the like. I pointed out that only works on werewolves.

Anyway, true enough, the clock maker’s shop had been burned to the ground. He was found trembling in his wine cellar just saying the word “Dragon!” while ugly crying. I can’t really blame him, dragons are pretty scary.

The warning bell in the tower tall awokened me this morning, as a patch of grass was on fire by the woods. This was a sure sign a dragon had been around during the night.

What baffles me is that dragons tend to do a mighty roar when they breathe a torrent of hellishly hot fire that would scorch the ground for maybe even miles around. Their wings make a mighty flappy whooshy kind of a noise like a storm approaching. How come nobody heard it or saw it, just the fire this morning?

The warning bell in the tower tall awokened me again this morning, this time with a warning to “Flee! Run for my life!! The fearsome fire breathing dragon is coming!!!”

My big mistake was, I was waiting sword in hand, staff in other, ready to repel the fearsome monster even at the cost of my own life. When what arrived was a beautiful greeny-blue dragonfly, that was 6 inches long, but the little blighter could indeed, breath fire.

The thing was, it was only enough fire to maybe light a birthday cake candle. I put my sword away and captured it inside a magical fireproof bubble so I could have a word with it.

I’ll do that in the morrow though, all this dragon stress has worn on my last nerve and I need to catch 89 winks.

Took my magic animal communication potion early and me and the dragonfly chatted for hours, their name is Alex.

Turns out Alex is bored to tears and because every time they burp, they spew a flame just big enough to light a birthday cake candle, that gives me a great idea.

I have to arrange a meeting with someone in the morrow, but don’t worry, soon all will be revealed.

So, I went to see a bloke called Brian, he’s a baker and maker of cakey bakey goodness for the whole village. We came up with a great gimmick. You buy your birthday cakes from him, and he gets the amazing fire breathing dragonfly to light all the candles for you. I know I’m a genius!

I released Alex from the bubble and into Brian’s capable care. The orders were already flooding in when I left at lunchtime after eating 7 cakes of course! And by flooding, I don’t mean water, that’ll put out Alex’s fire. That would never do!

Alex was one happy dragonfly. I hit the road with the pony and made the waterfall by evening, of course not before falling into an almost bottomless pit, luckily it had a bit of bottom and I’m a wizard, or we would have been doomed but never mind that for now.

The sound of the waterfall made me want to pee all night I was up and down 9 times. After skipping breakfast on account of the 5 cakes Brian insisted I took with me, and I had greedily scoffed the night before, I jumped back on the pony and was home before sundown. Just in time to write some cool stories for you! Hooray!

I’m sure next week will be as wild, or maybe wacky, or maybe weird, oh the life of a wizard, you never can tell.