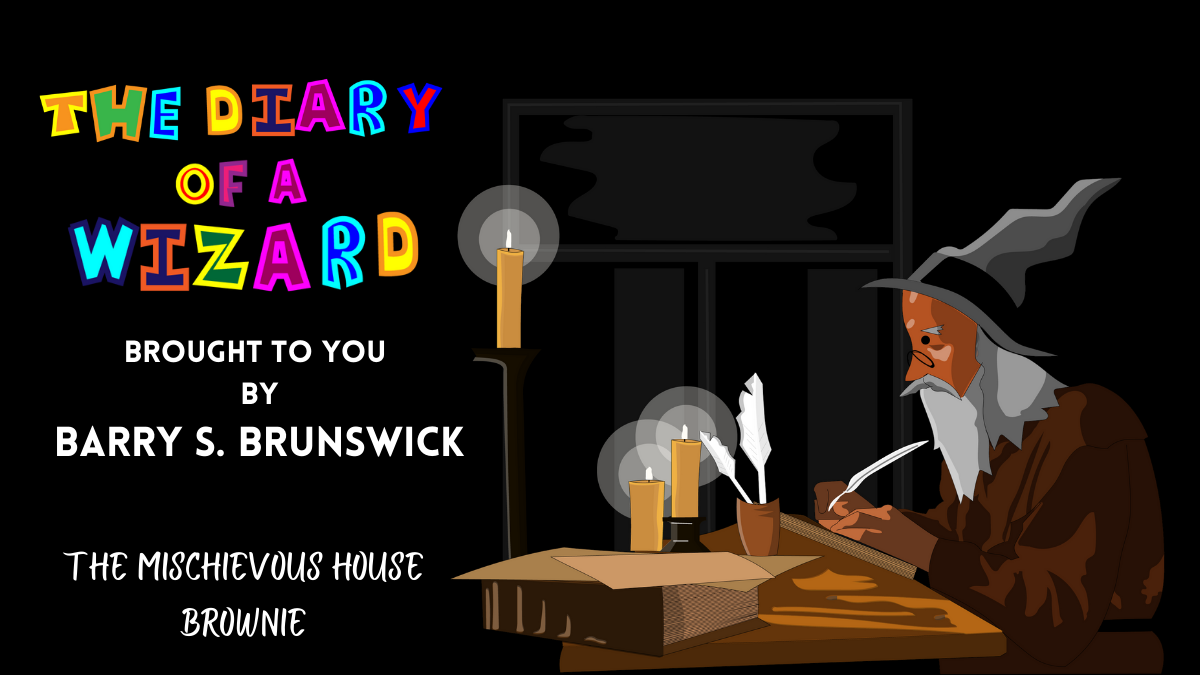 Hey friend! Welcome to the best blog for comic wizardry. This week I’m staying at home. I have many adventures I could be on, but I have a slight pest problem that needs resolving and I’d love to catch up in writing cool stories for you.

The Mischievous House Brownie: Day One

For the last couple of weeks I’ve had a pest problem, but it’s not cockroaches or rats, the mess they make is nowhere to be seen. My place isn’t unlivable, even if it is a little messy, but something has moved in. I haven’t heard scratching noises, and nothing’s being nibbled, it’s just little things.

Every time I do the washing one of my socks go missing, or my keys vanish, or one of my pointy boots ends up in the next room. I even swear I’ve seen something out of the corner of my eye but when I turn my gaze, it is gone.

I’ve set some humane traps, they’re obviously magic traps that turn vermin into things that are not vermin. As I don’t know what it is, I don’t know what it likes to eat. So one trap has a grilled cheese sandwich, one has pizza, one has a bowl of ice cream, one has ramen, one has chocolate cake and finally the last one has a nice meat pie. It’s gotta like at least one of them, I want to eat them all!

I’ll write some cool stories for you now and leave them overnight to see if I catch the culprit.

No sign of the pest in the traps but all the food was gone, and they had all been moved. They were all around my bed, I turned myself into a squirrel, then a hedgehog, then a toad, then a wombat and finally back into a wizard trying to get to the bathroom. It did make me feel a little giddy to be honest.

The traps failed, so now I’m gonna try chatting to my mate Billy Warthog to see if he can use his snout to find the blighter.

Billy came over and even though he sniffed every corner of my place he didn’t find anything but some 3-day old pizza under my bed. This leaves me with only one thought, I’m facing something paranormal.

I may need some help.

I contacted my best friend and 500-year-old cave witch, Caladium Crane through mystical mind message, she knows a lot about spirits and the such.

She jumped on her broom stick and flew over, and it only took her a jiffy. She brought a satchel full of things to help.

First of course I treated her to dinner, and she did not fancy 3 day old pizza. Which meant I had to cook newt stew. With bellies full of food, and laughs we hit the hay. She said she’d get to work in the morning.

Woke up to the smell of sage burning and Caladium had salt in her hand. Imagine my disappointment when I realised she was not making breakfast, but attempting to purge the spirits from my home.

We spent the first 2 hours of the morning chanting and burning sage. We’re gonna take a walk down by the river and hopefully when we get back the spirits have moved on.

The place seemed to be purged. There were no strange happenings while we were out and about. We settled for the night.

Woke up to complete carnage this morning, not only has the house not been purged it seems the attempted purging has made whatever it is mad. Now we’ve ruled out vermin, and spectors, I’m starting to think this could be the work of the fae, and there’s only one type of fae that messes up people’s houses, a brownie, in fact, a mischievous house brownie would make total sense.

Between us we’ve devised a magical trap, to catch the blighter. We piled up some shoes and hats and stuff the brownie will simply have to move around. When it does, it’ll be trapped in a silver magical bubble. Then we can rerelease it into the woods, as far from my place as possible.

Woke up this morning to the smell of bakey cakey chocolatey goodness. Caladium was cooking from dawn’s crack.

We ate an entire tray of brownies. They didn’t taste like normal ones, but she just said it was the special ingredient. Apparently, she caught the brownie really early this morning. She was pretty vague about what she did with it though.

Weird I had a brownie and then we ate brownies. Seems like a strange coincidence.

She left late afternoon on her broomstick, and I went to writing cool stories for you.

My stomach wasn’t good this morning, those brownies didn’t settle well. I think Caladium has something to tell me. I’m starting to suspect those brownies weren’t chocolate brownies but mischievous house brownie brownies.

I’m gonna write cool stories for you now and do my best not to throw up.