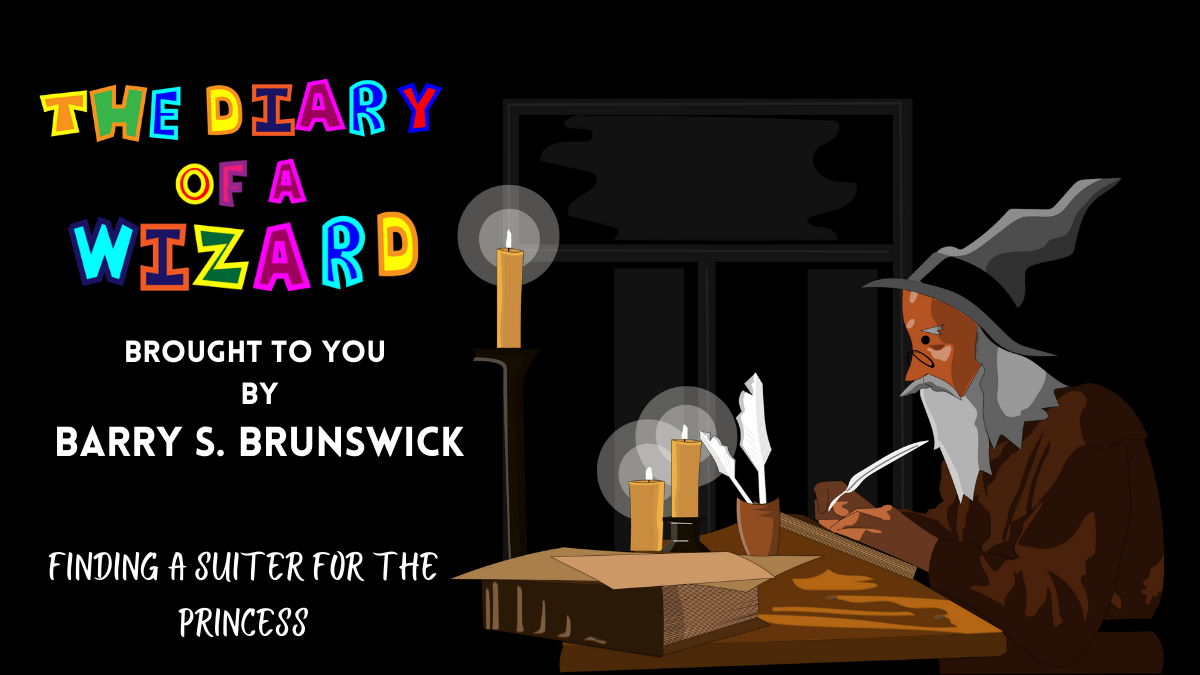 Hey friend! Welcome to the what I’m sure by now, is the world famous, best blog about all things wizard. This week I have to help out Good King Burt of Gonkingshire, he’s having trouble finding his daughter a suiter of royal blood. I don’t like to get involved with matters of the heart, but I guess as we’ve been friends for 53 years, I can’t really say no. Wish me luck, I’m probably gonna need it.

Finding a Suiter for the Princess: Day One

I received a scroll from Good King Burt of Gonkingshire, this morning asking me to, and I quote, “Get my magical butt to Gonkingshire at once.” 10 minutes later and a carriage arrived, leaving me little to no choice but to go. Old Burtie can get a little grumpy if he doesn’t get his way, and I can’t really turn him into a hedgehog cos well, he’s a good king.

My trusty magical steed Horace, was as happy as a dog in a butcher’s shop when he saw the carriage. For once he didn’t need a porkie pie of an excuse to not perform his steed duties.

I should be in Gonkingshire in the morrow all things being well.

Finding a Suiter for the Princess: Day Two

Arrived early but of course we were attacked by orcs on giant three-horned wild boar back along the way. They were a rowdy rabble indeed. They wanted to steal our wares, wares of which, we hadn’t even got. They threw rocks and spears, and worst of all, they used harsh language. I taught them a lesson or two.

I dropped a magic acorn and the ground swallowed them up. That’s what you get when you tangle with a tricky wizard! Don’t worry, it’ll spit them back out again in a few hours if they promise to stop stealing wares from weary travellers.

The king was in a foul mood even though he’d prepared me a feast of giant three-horned wild boar as it would happen. We ate and while most of us made merry, the king grumbled like a bear with a sore head.

The princess never showed up. Something tells me she is not delighted by my arrival. I arranged to meet Bertie in private in the morrow so we can discuss the situation in detail.

Finding a Suiter for the Princess: Day Three

The meeting with Bertie didn’t go well. It’s clear we have a case of a father who wants his daughter to do what he wants her to do, or he won’t be happy. He’s very hard to reason with. He’s actually quite annoying to be honest, I don’t even know why we’re friends.

He’s one of those people that thinks he’s full of wisdom, but in fact, knows nothing. He refuses to listen and always knows best. To be fair kings can get this way. When everyone has to do what you say, it makes it hard to listen I suppose. I arranged a meeting with princess Petunia, maybe then I can find out what’s really going on.

Finding a Suiter for the Princess: Day Four

Princess Petunia, is quite the character, she was practicing with her nunchucks this morning and I tell you, she would give Bruce Lee a run for his money. Anyway, we took a walk in the woods, so it was neutral ground. It would have been more pleasant if 89 guards and 17 handmaids didn’t have to follow her everywhere. With 106 pairs of eyes, or 212 eyes on us depending on which way you look at it, we had a private chat.

We got to the bottom of the problem straight away. Her father tries to set her up with princes, but she’s not interested in them, they don’t tickle her fancy. He thinks it’s because she’s distracted by her love of warriorship, but it really isn’t. He thinks she’s not interested in love, but she is. She has a fancy for the Elf Queen from Wispy Willow Country and who could blame her she certainly is a maiden fare, and she has royal blood. Boom! She told me she’d love a date with her.

She said the king says, “You’re not interested in boys just martial arts and fighting.”

He says, “Well of course you’re happy, you’re my daughter, but we must find you a husband at once.”

She’s told him 79 times and it still hasn’t sunk in. Of all the stupid, pea-brained, narrow minded, unlisteny people that don’t listen, this guy is the worst. His head is as thick as 3 short planks. I better find a way to get through to him in the morrow, and then I have a date to arrange.

Finding a Suiter for the Princess: Day Five

Petunia and I both spent 3 frustrating hours explaining to the king her position and what she wants. I explained the more chains he puts on his beloved daughter the less he’d be beloved back. She’s an intelligent, skilled, and delightful maiden fare, and old grumpy pants has been so mad, he never even noticed. I said that her happiness was what mattered not his. I even used a listeny spell, so he’d shut up ranting for a second.

Finally, it sunk in, and I left them having many tears and cuddles.

I snuck out to Wispy Willow Country by shrinking myself to a small size and getting on a crow. It’s always quicker as the crow flies.

I proposed a hot date to the Elf Queen, and judging by the fist pumps, I could tell she too had her eye on Princess Petunia. The date was arranged for the seventh day of this said week. I got back for the chime of midnight. I need some sleep. I’m as worn out as a weary wanderer’s old boots.

Finding a Suiter for the Princess: Day Six

Got the carriage and made it back by sundown. Of course, we were attacked by orcs on giant three-horned wild boar back again. They were the very same ones. They’re pretty dumb. The ground swallowed them whole again, until they learn their lesson. Something tells me it’ll take them longer to learn their lesson that in did for Good King Burt, to listen to his daughter.

They seemed to have reached an understanding at last, and though this may not have been my most wizardy adventure, it is certainly one of the most magical to see them smiling.

Finding a Suiter for the Princess: Day Seven

Spent the day writing cool stories for you today. I was alone. Horace took one of his friends to The Valley far Away. Weird, considering he never takes me anywhere. But I suppose, who can blame a mythical beast for being well, mythical?
I had a thought or two for Princess Petunia and the Elf Queen, their hot date was tonight. I do hope a maiden fare and a maiden fare, have their maiden affair. Oh, that one tickled me!!

I’m off for now, see ya next week friend!!

2 thoughts on “The Diary of a Wizard – Week Eight”