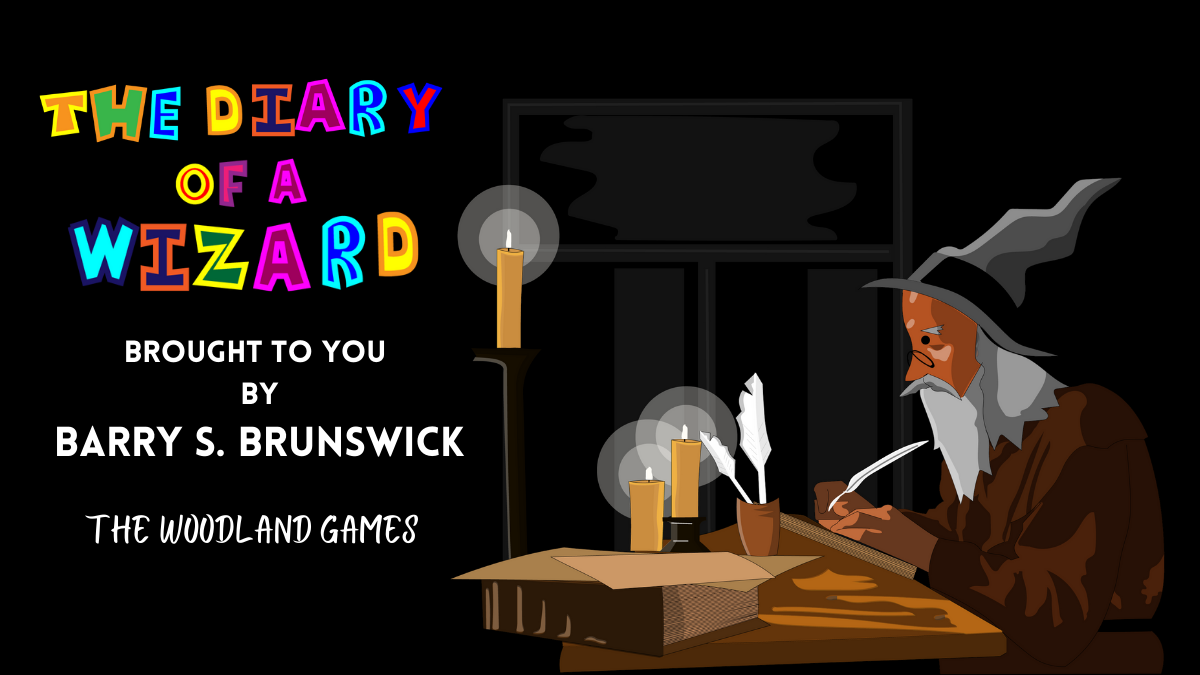 Hey friend! This week on the best blog for magical mayhem, I’m off to watch the Woodland Games. They only happen every 7 years and the great and good from all around the kingdom attend. It’s so much fun!

The Woodland Games: Day One

I jumped out of bed super excited today. For once I’ve got some rest and relaxation time. I’m headed to the Woodland Games. I suppose you folks in the human places where humans live, would compare it to the Olympics. But The Woodland Games are far more bizarre and magical. My trusty magical steed Billy the over-sized talking cockney mountain goat, isn’t needed for this one. Free mule-pulled carriages are available for all to get to the Woody Stadium where the event will be held.

I’ve sorted my sleeping arrangements, packed my bags, so just need to get the next carriage.

I got to the Stadium by lunchtime and took in some events.

The tree frog riding faery race was so exciting, and the acorn hurling was amazing, bobbing for pine cones came down to the wire, and rock paper scissors was on a knife edge, the squirrel tree climb was the best in years and we got a new woodland record for the mushroom bouncing. If tomorrow is anywhere near as exciting, I’ll be in for a treat. I have a feeling it’s gonna be. And on day five, the final day, my favourite event, the wombat wrestling. I’m literally jiggling with excitement in my pointy boots!

I woke up so excited this morning you could even say I was exciteder, than an electric eel’s eccentric aunt Edna as she entertains Edward the ecstatic elephant (I think I’m taking these things too far now!).

Anyhoo, I rocked up to the stadium bright and breezy because there’s breakfast to be had. The stadium contains so many types of food from all around. It truly is the height of culture. I had a cheese toastie (grilled cheese for my American friends), see culture, and then went to catch the hedgehog bowling. This is where goblins bowl hedgehogs. I’ve always thought it seems kinda cruel, but the hedgehogs seem to enjoy it. There was pixie long jump and the fawn three-legged-race, not to mention the magical bubble blowing comp. The entertainment was put on by 7 big foots, or 7 big feet, no I guess that would be 14 feet, anyway, you know what I mean, and they were riding unicycles and juggling. Joyful giggles and hearty belly laughs were had by one and all.

We even had an enormous dance late into the night. I’m beat so it’s beddy byes for me.

I woke up bouncier than a boinging bear’s blown up beach ball this morning and went to the stadium again. Though today wasn’t as much fun as I’d hoped. I must remind myself not to watch the snail’s marathon next time cos I was there for a full 13 hours, and they hadn’t even got the first mile covered. They’ll still be finishing the next time the games come around in 7 years.

Well, the day was kinda wasted but at least I got to sit next to a lovely couple of woodhags. They look a bit busted but they’re kind once you get over the initial shock and always look into the mid-distance over making eye contact.

I’m completely worn out so I’m gonna hit the hay.

I jumped out of bed this morning and I was happier than a hatted humped hippo’s humorous human helper, (yep definitely too far now!). Today I’m heading for the pond to take in the aquatic sports.

First up there was the crocodile gauntlet where a bunch of ducks have to rush across the croc infested pond. Then the Loch Ness monsters did a holding the breath comp. The tadpole dash was quite the spectacle, and finally, the day ended on with the Merpeople doing a wonderful synchronised display of swimming mastery. It was nice to see some of my old pals. I met them back on week 2, where we had quite the time. Check it out here if you missed it.

Now I’m going to try to get some sleep but with the wombat wrestling coming up tomorrow I may struggle to get my 31 winks.

The big day is here and I’m more jiggly than a juggling jumbuck at a jolly old jamboree, (okay I’ll stop now for at least this week anyway I swear!).

I rushed to the arena where the combat events take place. First we got to see some jousting, and then some snappy crab duels, then the warlocks went at it and finally the last event of the week, and my absolute fave, wombat wrestling!

The wombat is a kinda half hippo, half pig, with a stupid teddy bear face, but they are pretty good a wrestling due to the fact they love to wrestle on Sundays. 50 wombats entered and finally, Widget the wrestling wombat was the winner. The gold medal was squeezed over his huge neck. It was a heck of a day!

As the day turned into night the stadium emptied out and once again after 7 long years of waiting, the Woodland Games was over.

I better get 23 winks tonight, I have some cool stories to write for you.

I got the carriage and was back home by lunchtime, I spent the afternoon cooking a 7 hour acorn stew. I took some time to write some cool stories for you, though I do have to admit I was getting a little distracted by the happy memories from this week.

I made some progress however, and now it’s time for me to hit the hay.

I hung with my trusty magical steed Billy the over-sized talking cockney mountain goat for a few and we played some cards. Then I carried on writing some cool stories for you. I do wonder what next week’ll hold. I’m sure it’ll be most magical!

2 thoughts on “The Diary of a Wizard – Week Twenty”