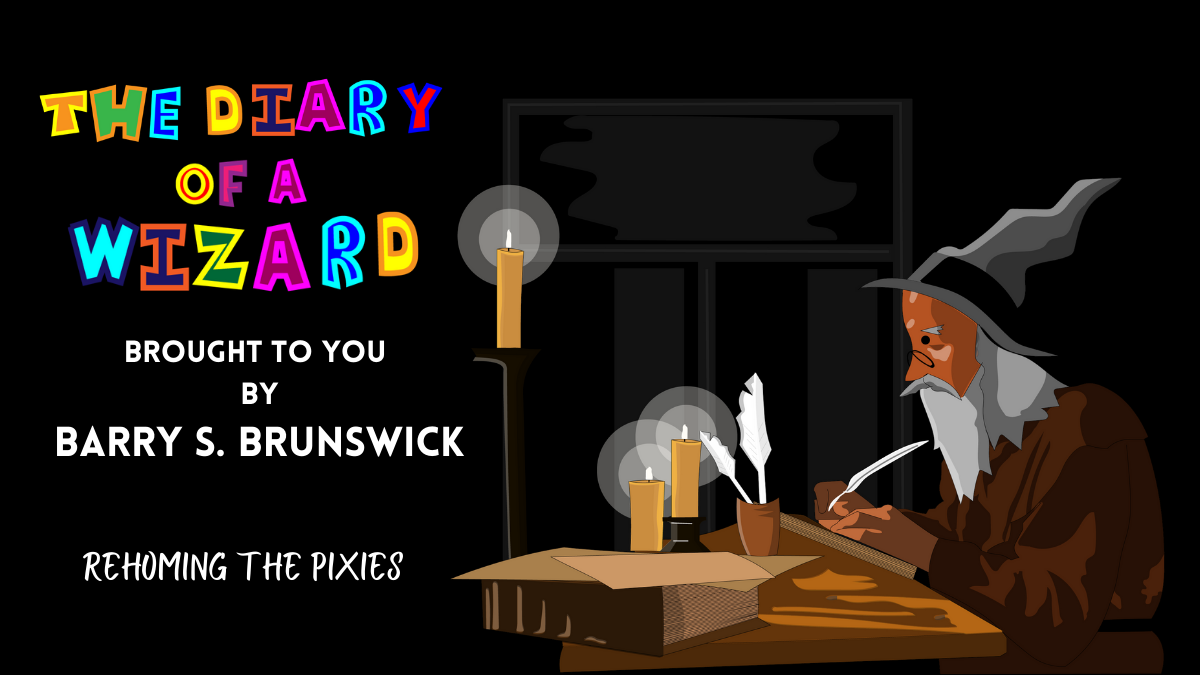 Hey friend! Welcome back to the best blog about wizardly things.

This week I’ve decided it’s time to rehome the pixies that have been living in my bread bin for the last six months.

Rehoming the Pixies: Day One

I knew it would be a hard conversation with Snuffles-with-Dimples, the leader of the pixy tribe, but I had to do it in the end. Yes, I know the storm ruined their home, so I let them live here for a “few days”. It’s been six months now. All they do is eat my food and have squeaky parties all night. Trouble is, they are eight rowdy bachelor pixies and I gotta be honest, I’ve reached the end of my tether. I had a chat with Snuffles-with-Dimples, today, told him he’s got a week to move on.

Needless to say, he didn’t take it well. He told me they’re still renovating, that’s why they stayed so long. The way I see it is mushrooms grow on their own, they don’t need renovating. I said I’d help in any way I could. The first thing he did was ask if I could buy him a new pad. ANY WAY doesn’t mean anything, just whatever the hell I can do to get them out of my life, save buying them an apartment in swinging Bramble Junction.

Tomorrow we’re gonna check out mushrooms, cos toadstools just aren’t cool enough. My eyes rolled so hard they plipped out my head and rolled across the forest floor for 37 yards.

Spent all day today with Snuffles-with-Dimples and his minions looking at mushrooms. “Not frilly enough. Too frilly. I don’t like the spots. My pet snail wouldn’t like this garden. My poster of the Fae of the year winner won’t go with this light. Oh no, I can’t see myself doing yoga in here.” Well, you get the very frustrating picture. I’m starting to despair. If I show any sign of stress whatsoever, he tells me I’m stressing HIM out.

We’re headed for the wide-open fields tomorrow in hoping to find something with the right “energy” my eyes just flew out the sockets and went on a roll 100 miles to the beach, just writing those words.

I hope I see my trusty magical steed Horace, tomorrow, I been meaning to have a word with him about some things.

It was another fruitless day with Snuffles-with-Dimples, but his fellow tribe members certainly do everything he says. He insists that we should look at secret lairs, his words not mine. I’m starting to see red flags. Something isn’t right, I just can’t put my finger on it.

Oh, I saw Horace by the way, I called his name and he just yelled he had to go and ran off as fast as he could. I hope he’s okay.

Snuffles-with-Dimples chose a nice secret volcano lair, he felt it had the energy he sought, and he could see himself doing yoga there. Apparently, it had a “spiritual inner warmth” but I’d say that’s probably because of the liquid hot magma myself.

We moved in his wine cellar and for some reason he had another 54 pixies with him today carrying guns and wearing silver jump suits. Also they each had a pet snail with a laser attached to their heads. Weird!

Moved all of the pixies’ stuff out of my place and into their place. There were hundreds of them today. I think he’s been on a recruiting binge to help him with new business opportunities. That will help a young driven guy like him. I actually wouldn’t be worried at all if he didn’t insist on them all calling him “Supreme Leader” rather than his name. Even weirder!

Yep, it’s official, Snuffles-with-Dimples has: A. Started a cult and B. Has huge aspirations for world domination. There was a lot of pixies walking round like zombies chanting yesterday when we moved in the rest of his stuff. There were helicopters with machine guns on them and I overheard something about hijacking some nuclear weapons. I decided it would be best if I turned him and any other resisters into hedgehogs. Just a heads up in case you see hundreds of hedgehogs in silver jump suits at any point, you’ll know what’s up with that.

So nice to have my place to myself for the first time in months, and not having to listen to pixie rave music, which isn’t my fave genre to be honest. I can sit here and write cool stories for you in peace.

Kinda nice to have foiled another plan for world domination on the quiet as well. Minimum fuss. Bish bash bosh, job’s a goodun! I mean he may still want to take over the world, but a group of hedgehogs just aren’t scary enough to take over the world. A group of dragons on the other hand, or shapeshifting robots, or three headed dinosaurs, or like, an army of sasquatches, or 12ft octopus men, now they could take over the planet!

Anyway, another week over, I’m sure the next one will be as wild or at least as weird…See ya next week friend!!