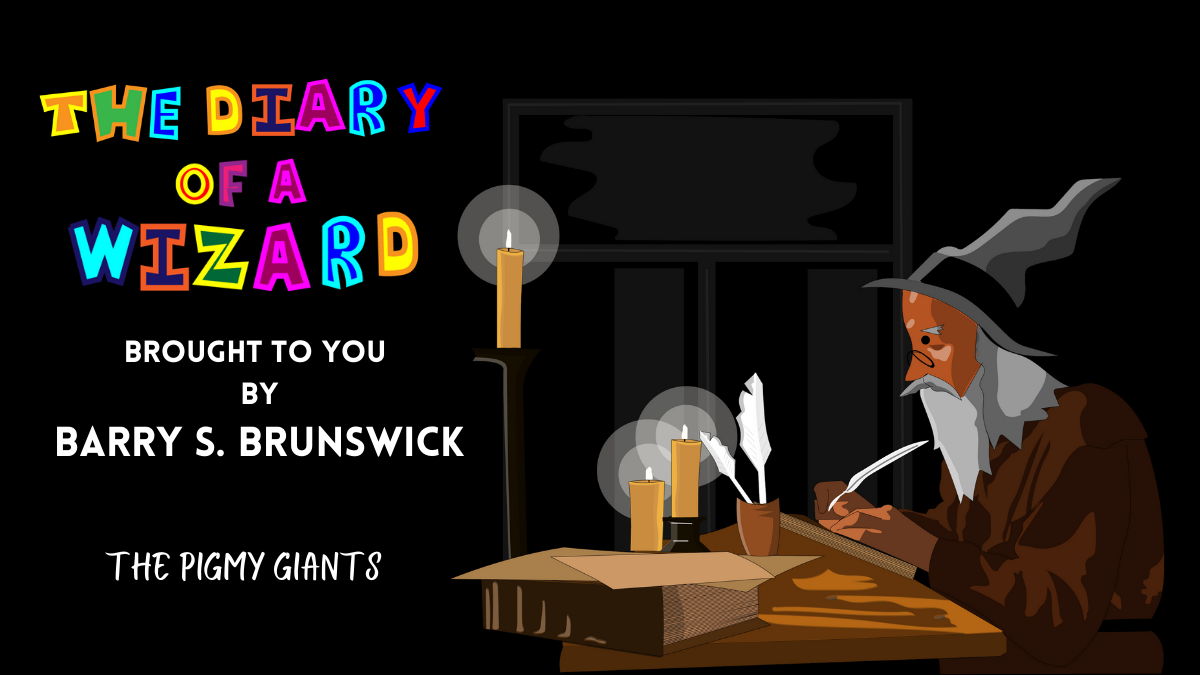 Hey friend! Welcome to the best blog written by a wizard. This week, I’m going to see my best friend Caladium Crane. She’s a 500-year-old cave witch, don’t you know? She says she has a special quest for us to go on. I can’t wait to see what she’s got for me.

The Pigmy Giants: Day One

Being a cave witch, Caladium, obviously needs a cave, not only a cave but a secluded one. She hates the happenings of humans. She only puts up with me because I’m a wizard. The cave is situated in the outback of nowhere, many days walk, but I paid a crow to fly me here. Far quicker shrunk down and on the wing.

My trusty magical steed, Horace, hasn’t been feeling like travelling recently, which is weird seeing as he’s never to be at home. He must be travelling somewhere.

Anyway, we had a little wild boar with slug slime gravy and chatted around the fire til late. She’s very excited about where we’re going but won’t give me any clues. I’m itching to know. Unlike her, I don’t have a misty crystal ball to show me the future. If I want to see the future, I have to do it the old-fashioned way and time travel, and that is very draining.

I guess I’ll just have to wait and see what the morrow brings.

After a bit of faffing around, we finally got out the cave entrance. Cave witches will insist on doing weird rituals with bones and stones and crystals, before they will actually engage in any activity at all. I’m not 100% she actually sees anything, or it does anything, but if it makes her feel better, I’m onboard.

After the spirit of the forest was appeased, we travelled all day, deeper and deeper into the woods and around the hills. She keeps stopping to sniff the soil. I think she’s tracking something, but still won’t fill me in on what. I guess it’s a bit of luck I trust her cos she could be taking me anywhere.

We were attacked by some tree goblins, it was dark. Poor things didn’t realise I was a wizard and Caladium was a cave witch, needless to say, they are no longer tree goblins. Half of them are squirrels and the other half are toads now. Might change them back on the way home if they prove they have learned how to behave.

Today we found what we had been looking for. We came to the distant valley and then, a top of a hill, I saw it. It was the gates of a village hidden from civilisation. Caladium told me they’re a long-lost tribe of giants. When I pointed out they were only the same height as me, she still insisted they were giants, just of the pigmy variety. Apparently, they are giants, just short ones.

They shot poison darts at us as we came nearer but when they saw the tea pot and biscuit tin, they knew we were friendly. We had some dinner and they kindly invited us to stay for a couple of days.

This should be interesting. Luckily for a village of giants, everything is the perfect size for us. I’m not totally convinced they are really giants, but I guess time will tell.

The giants had a ritual today that we were welcomed to join in. They insisted I wore a tiny loin cloth as that is the traditional dress for the ritual. I have to say not my most flattering outfit. At least I have a long beard to keep me warm.

We danced around the fire chanting, and then they sacrificed a pineapple. Seemed kinda barbaric, but then they say it appeases the spirit of the forest. I wonder why everyone is always trying to appease that spirit. Who am I to argue as long as they don’t put the pineapple on a pizza? The spirits would be peased right off with that I should imagine.

Later they did a dance which depicts the pigmy giants in their greatest battle. The one they had with the giant giants, who actually were tall. Ingeniously they made all the entrances to the village the size of a normal door, so as the giants tried to enter, they bumped their heads.

It was a great day but they did put the pineapple on a pizza, which is just plain wrong and frowned up in most wizard circles.

We played a game today which is their favourite, it’s called “Who’s the Tallest Giant?”. They basically fight to be the first to stand on what they refer to as, “The Growing Chair”. It’s a chair that they stand on because it makes them feel taller.

It’s become clear over the last few days that the giants clearly have a deep-rooted complex about their height. They’re always up on tippy toes, or the wear huge platform heels to make themselves feel better. I guess if the coolest thing about being a giant is that you’re well, giant, then being a short one must suck.

Anyway, I got a little plan to make them feel better. I’ll need a bit of help from Caladium’s magic, but I think between us we can make them a bit happier.

It’ll be the last thing I do before I leave in the morrow. I’ll let you know how it goes.

Left the village today, but not before we made everything smaller. A secret incantation, obviously one so secret, I can’t say the words here for fear of being turned into a hedgehog by The Grand High Wizard himself.

The giants were over the moon! I mean they loved it, they felt ten feet tall. They rejoiced and cheered and hailed us as heroes. Well, they did until they realised that now they bump their heads on the way through the doors. Oh well.

They were pretty disgruntled and started shooting poison darts at us again. We got out of there quick smart. No one wants to have a fight with 100 angry giants even if they are only short ones.

We headed back towards the cave. We did change those tree goblins back in the end. They said they’d learned their lesson, but I’m not so sure they have.

I dropped Caladium off at the cave. She did another weird ritual so I would have safe passage back home. Now it seems even I can’t engage in any activity, without her doing a ritual.

Got home at lunch time which gives me plenty of time to write cool stories for you. Caladium and I will be going on other adventures soon no doubt. I wouldn’t want life to get boring.

See your next week friend!

3 thoughts on “The Diary of a Wizard – Week Four”