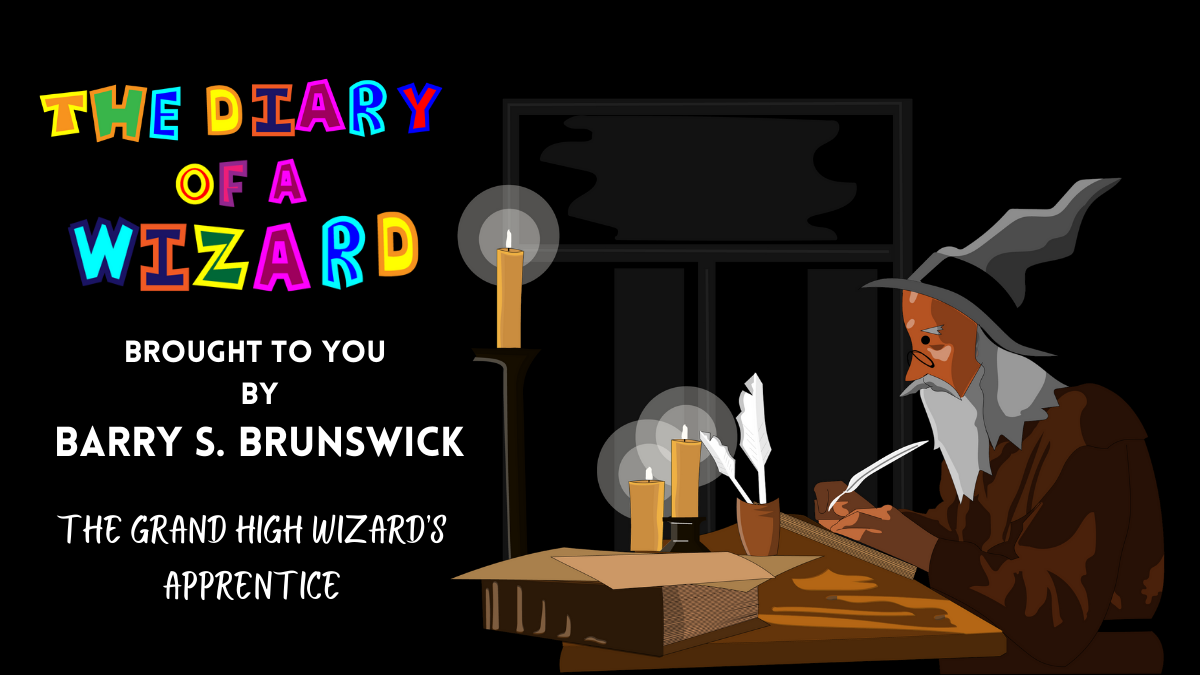 Hey friend! This week on the best blog for stuff that happens in a wizard’s world, I’ve gotta babysit the Grand High Wizard’s Apprentice. It’s sure to be a tough week, he’s a really bad apprentice, so it’s gonna be testing.

I received a mystic mind message from the Grand High Wizard this morning. We met him all the way back in week one where I had to use the ancient library. When I receive mystic mind messages from him, it normally means it won’t end well for me, and this was no exception. Though most times it would be going on a near suicidal quest at his behest because, either he can’t be bothered, or he’s shakily scared like a cowardy custard, on this occasion near suicidal is not what I’m a up against, it’s worse. I have to watch his apprentice for 5 whole days while he goes and “conducts important wizardy business” yeah, we all know he’s going to the beach to drink fruit-based cocktails with little umbrellas in them. But anyway, I gotta watch Cuthbert his incompetent and annoying apprentice. Cuthbert isn’t really cut out for wizarding, but he is however, The Grand High Wizard’s nephew. A bit of nepotism is always a nice touch.

Anyway, needless to say, I gotta get rid of my fine China while he’s around. I better fool proof the place before he gets here. I’ll just have to hope he doesn’t blow up my house or turn the wrong things into the other wrong things.

Finally came the knock I’d been dreading, of course as always, The Grand High Wizard was 3 hours late. It’s a game he likes to play. I know he’s coming at any moment so I can’t do anything, but yeah, any moment is always a moment 3 hours after it should be. Anyway, to set the scene, the kid comes in, in robes that are too long for him staring at his phone, he trips over his feet and dropped and smashed the bottle of turnip wine they’d bought me as a gift. And there goes the only good thing that will come out of this whole situation before we even start. I picked him up and he actually started crying, bear in mind the kid’s 17 here. He’s tall, skinny, spotty, and looks kinda gobliny or maybe even gremliny, I can never quite decide.

GHW (Grand High Wizard) didn’t want to stay for tea, he had to dash to meet several members of the Order of Wizards. Well, that’s what he said, he was wearing flip flops, board shorts and a Hawaiian shirt which kinda gives his game away but here we are. He dashed off in a red sports car with the roof down. Strange, he had two women in bikinis in the car with him, I’ve never seen them in the Order of Wizards before.

So, now I was alone with Cuthbert it was amazing how long the awkward silence lasted, it was at least an hour and 47 minutes. I asked him how wizard school was going.

“Have you made many friends there?”

“Have you been learning any magic?”

I just can’t get him to say anything at all.

I give up! I’m gonna go cook dinner for 4 hours while he sits on the sofa staring at his phone with ear buds in. This is gonna be a long week.

As Cuthbert and I didn’t have any joy with the chatting thing yesterday, we’ll try some magic today. The most basic thing I think we can do is your typical Disneyesk cleaning job.

Yeah, it turned out maybe it wasn’t as basic as I thought for Cuthbert. Luckily, he hasn’t anywhere near earned his wizard’s staff yet, he’s only got a little wand, so I reversed his mess. I came in the kitchen and the pots and pans were tornadoing around the room and he was standing there smiling staring at his phone.

I thought maybe I could get him to help me cook dinner, unlike GHW I haven’t got a live-in chef to cook for me, but I decided against it. I’d rather eat something Caladium Crane would cook and she’s a cave witch. I guess that leaves it up to me.

We had dinner and I went to bed super early just so I didn’t have to sit around in awkward silence for the whole night.

Today I decided that as he’s useless at magic and chatting, we’ll go foraging for some potent and powerful potion ingredients. It turns out that he’s not much good at foraging either. He had to check his phone to see if they were the right things and you can’t Google ingredients to wizards potions, imagine if that power got in the wrong hands, I ask you.

Now I’m out of ideas with what to do tomorrow, he just isn’t interested in it at all. I did get some nice swamp toads for soup tonight though so it’s not all bad. At least Cuthbert didn’t get into any trouble apart from when he fell into the swamp. He was a little grumpy about it, but I laughed heartily for a while.

I’ll have to come up with something for tomorrow or this is gonna get painful.

Instead of wizarding, today I’m gonna get to the bottom of a few things with Cuthbert. I made some acorn tea and started a little conversation.

He looked up from his phone for the first time that day, “Not really, my uncle says it’s the family trade and cos he never sired an heir, he makes me do it.”

“Well, I’ve been round a while my young friend, and you cannot live your life the way someone else wants you to. What do you like doing?”

“Computer coding. I’d love to learn a lot more about it!”

“Firstly, I’ll have to say I don’t know what that is! But I have an idea that may help you out tomorrow.”

“What about my uncle?”

We did chat that night, he told me all about the things he was interested in, and I listened. He’s not as stupid as he first appears.

GHW is coming to get Cuthbert later and there’s gonna be a lot to do. First, we have to dash down wizardy school and get Cuthbert out, and then enrol him into the humany school to learn coding and other humany stuff. Then I’m gonna have a grumpy Grand High Wizard to deal with. I’m going to need my trusty magical steed Billy, the oversized talking cockney mountain goat for this and he must run like the wind.

I got Cuthbert out of wizardy school and down to a place he could catch a Uber to humany places where the happenings of humans happen. No way am I going there, way too humany for my liking! He waved goodbye with a glint in his eye and an entire future ahead of him. Now I better get back before GHW gets to my place.

I was lucky he was the usual 3 hours late again or I never would have made it back in time. He does this hammer on the door and then just enters uninvited thing, so that’s what he did.

When I said, “He’s not here.” He exploded in the customary manner and had a red face ragey rant for 17 minutes. Now I know how the GHW rolls, so if I make it about Cuthbert, he won’t listen at all, I need to make it all about him.

I explained that an incompetent apprentice makes him look bad, like he couldn’t train a dog, let alone a wondrous wizard, yet a wonderful computer coding nephew is a far better look. And now he’ll have more time to go down the beach, erm, I mean, conduct important wizardy business.

“Oh yes, well very good. I have a big quest for you next week so don’t go far.”

Sure thing pal, not like I have anything better to do than run around for you, I avoided saying out loud.

With that he ran off chuckling and screeched off in his sports car. If he’s got a quest for me what’s the betting this time, I’m gonna actually have a near suicidal quest to go on. Oh the life of wizard!

Well, I’m glad Cuthbert has gone to find his calling, it’s so important to be true to yourself in life. You can’t live to please others, the ones that are worth it will be pleased with you just like you are. And with that, I shall bid you farewell for another week. I’ve gotta write some cool stories for you.

1 thought on “The Diary of a Wizard – Week Twenty Four”