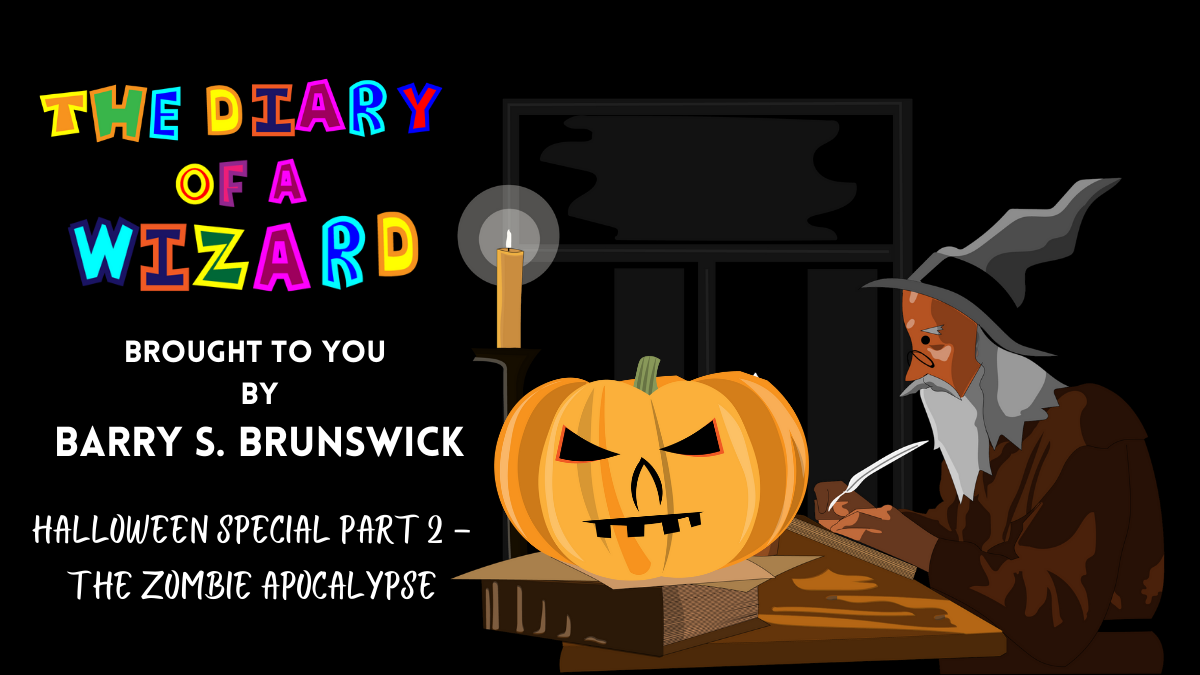 Hey friend! Welcome to the best blog for Halloween magic. This week on the Halloween special part 2, as you know, we’ve got an undead freaky vegan zombie conundrum in The Enchanted Woods and my best friend, and 500-year-old Cave Witch, Caladium Crane and I are in some serious trouble! You may wanna Check out part 1 first if you missed it.

My best friend and 500-year-old cave witch, Caladium Crane and I were stricken and covered in apple juice at the bottom of the crater her grenade had created when it blew the zombies apart. Worst of all, from the cider apples, we were completely covered in apple juice. The zombies are certain to mistake us for fruit and gobble us up. We’re sure to meet a demise by vegan zombie chompage!

While the fearsome vegan zombie horde surged moaning towards us. We knew even with our weapons at the ready, we could never defeat them all. That was when our steeds, Billy, the oversized talking cockney mountain goat and the huge battle annoymoose came to our rescue. They charged through the horde, horns and antlers doing what they do, and knocking vegan zombies everywhere.

We pulled ourselves up, skidding like we were on ice skates on the appley gunk from the explosion and climbed onboard our steeds. They turned and charged once again sending zombies flying all over. My sword and Caladium’s shotguns making short work of any that ventured close enough that hadn’t been scattered by the steed’s charge.

“Head for the river,” I said. “We need to wash this apple sauce off if we’ve got any chance of surviving this attack.”

We reached the river in good time, had a wash, foraged for some food, and then caught 17 winks. A worn-out warrior is no good to anyone.

We awoke to the distant groans of zombies coming from the woods. We couldn’t possibly protect all the plants, there’s just too many of them. We had to rush over and do what we could and save one thing at a time. It seemed a hopeless task.

We fought for hours, my sword was dripping with veggie mush and Caladium was running low on shotgun shells, but the horde showed no sign of slowing. If anything, it was growing.

That was when we heard a rumble in the trees. We turned and to our amazement, an army was bursting through the woods. Creatures of all different shapes and sizes. It was all my familiar friends!

There was the tribe of Pigmy Giants from week 4, the Ill-tempered cave trolls and disgruntled swamp goblins from week 5, the family of yowie from week 6, my old mate Percy the short-sighted cyclops from week 7, The happy harpy, Raven, from week 11, Henry the sasquatch and his pet dinosaurs, Tiddles the triceratops, and Molly the t-rex from week 12, The village of dwarfs from week 13, Reggie the swamp monster from week 16, Wood Pimp from week 19, and finally, the closet monster from just 2 weeks ago. Now those vegan zombies have got problems.

This lot can protect the plants and Caladium and I can find a magic solution to our problem. We both knew what we needed immediately—dilly root.

She made extra sure she fired off the last shells she had before we left. Boy does she like killing stuff. Then unsurprisingly, she pulled two enormous pistols from behind her and fired them. A bang echoed and then a second and headless zombies slumped down. Like, where does she even get these things from? There she was, sitting atop a battle moose, reigns in her teeth, firing one gun after the other. Even with the reigns in her teeth, I could still hear her wooting in between cackling laughter.

I could tell she wanted me to leave her there so she could satisfy her killing appetite, which is worryingly substantial, but she is the best at finding the root and it’ll take both wonderous wizardry and cave witchery to fix this Halloween-sized problem.

We better go as fast as we can, but our steeds are starting to wear out.

We caught only 7 winks on the ride, still bumping into the odd zombie to Caladium’s delight, but as we neared the marsh where the root can be found, the steeds started to tire badly. We jumped down and had to walk the rest of the way ourselves. We left the steeds grazing by the edge of the marsh while we went wading.

It took us all day, but finally Caladium’s witchy nose smelled what we were looking for. It was a huge bit of dilly root. Now to get back to the steeds, then head to the cave so we can mix up some magic!

The steeds had had plenty of food and a good sleep by the time we got back to them, and we made the cave by the time all four of us were ready for some winks. I’m certain the formidable army of my friends out there is doing a great job of protecting the trees.

We set to work mixing up some magic before beddy byes!

We awoke to the morning to a pungent pong kicking up from the powerful and potent potion we were brewing. We added a few more secret ingredients and waited a further 5 hours. Finally, the potion was ready. Now all we had to do was use it.

We decided there was only one way to best utilise it, and that was to take to the air. First, we poured the magic potion into balloons. And then I did a secret incantation, using words so secret that if I was to write them here, I would get turned into a hedgehog by the Grand High Wizard himself. In moments the cave was filled with dragonflies. Caladium did something similar, but witchy style and within more moments the cave was filled with bats too.

We loaded our pockets with the potion balloons and all the dragonflies grabbed my robes, the bats did the same to Caladium and flew up high, lifting us clean off the ground. Before we knew it, we were flying over the woods watching the vegan zombie carnage down below.

There was an enormous explosion.

“Wait.” I said, “This potion shouldn’t explode into a ball of fire.”

Caladium cackled. “I had one grenade left.”

“Okaaaay,” I said, rolling my eyes. “Now can we use the potion please?”

And away we went. Flying over the zombie hordes and dropping the magic balloons. As they exploded and the potion went splatting out, the zombies that got hit instantly turned into vegetables. It worked wonderfully well.

I feel this will need another no sleepy spell cos we’ll be doing this all night. And beyond.

It wasn’t until lunch time today we finished dropping balloons and our friends the dragonflies and bats placed us softly back down on the ground. The animals, creatures, beings and most importantly, plants, all rejoiced heartily. Thanks to teamwork, some brave friends, cave witchery and of course, wondrous wizardry, The Enchanted Woods, our home, had been saved from the vegan zombies. And there were plenty of vegetables to go round. This is the best harvest ever!

As beat as we all were, after fighting for so many days, there was only one way to celebrate. We threw an enormous party and made merry long into the night.

With a fuzzy head and a worn-out body, I said goodbye to Caladium and the rest of my friends. I jumped aboard Billy, and slowly we trudged all the way back home. We had some dinner, and I was so tired, I went to bed early and got a huge 179 winks. Fighting Vegan zombies can wear you out.

Peace is once again restored to The Enchanted Woods, and the creatures and plants of the woodland can return to their normal, everyday, whacky existence.

I especially hope Caladium has satisfied her bloodlust for at least a little while. She does get a bit crazy at times. I think she may have totally lost it, maybe she’s been in the cave a bit too long, who knows? But as I always say, what can ya do, she’s a mate? I’m sure I’ll see her again for another adventure soon.

Now I’m going to write some cool stories for you.

Happy Spooky Season, and as always, see ya next week for some more wizardy fun friend!

1 thought on “The Diary of a Wizard – Week Twenty Three”