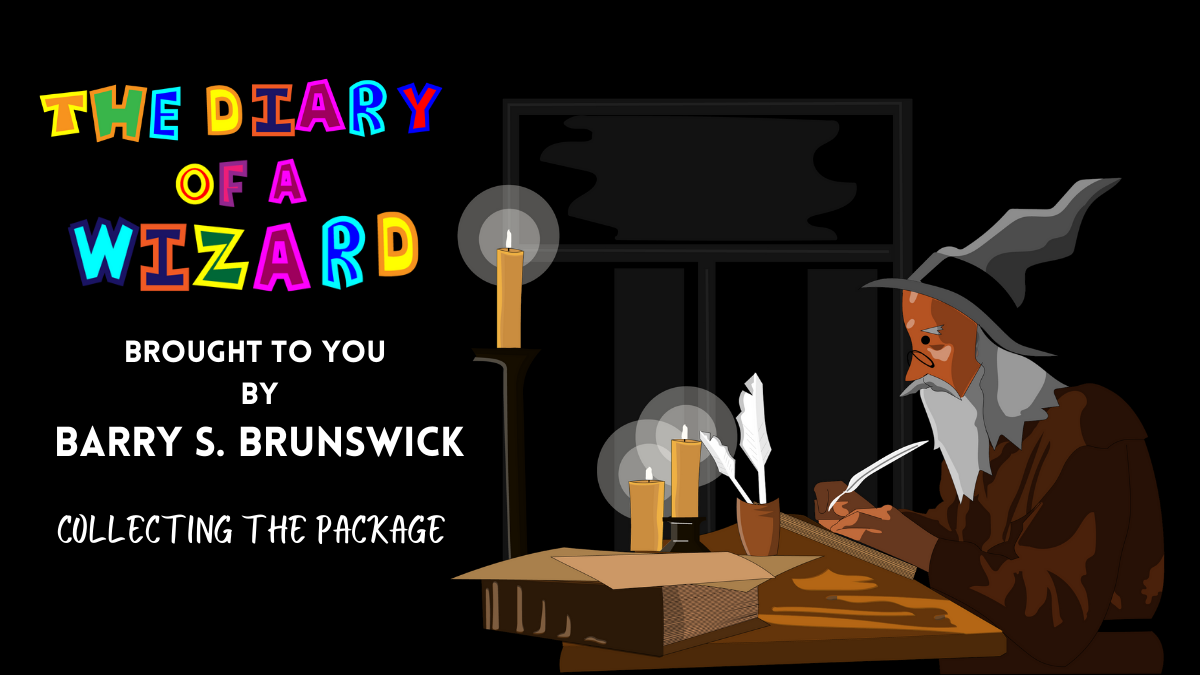 Collecting the Package: Day One

As is my favourite thing on any given Day One of the week, I got another mystic mind message from The Grand High Wizard, as he promised last week after I’d had to look after his Apprentice, Cuthbert (Click here if you missed it). I have to go out to The Jagged Rocks, to meet a cave troll who has a special delivery for The Grand High Wizard. I have to travel across the jig to the third jag, and this is after heading right through Trixie Pixie country and trust me they are not called trixe for nothing. I’ll need to be on my guard. He couldn’t have been firmer about the fact that under no circumstances am I to look inside the package.

On the plus side, having a trusty magical steed called Billy, who is an oversized talking cockney mountain goat, will come in handy when travelling to The Jagged Rocks, he’s an amazing climber unlike me.

I’ll summon Billy, get prepared and head out for the rocks bright and breezy in the morrow.

Headed off on our quest this morning and made Trixie Pixie country by early afternoon. Trixie Pixies build traps, and throw things at you, or shoot you with little annoying blow darts that don’t do much damage it just takes forever to pull them out. They steal stuff and sometimes they even swear! They are relentless and across the valley they bugged me all afternoon.

Luckily, I brought a magic acorn for when we stop for the night, that’ll keep the pixies away.

I searched my pockets and my bag for the acorn, but I couldn’t find it anywhere. Those pixies must have got at it. Now I’ll have to sleep with one eye open and a fly swat in hand.

Well what a fun start we had to the morning! Spoiler alert, it wasn’t fun. I shut my eyes for 13 winks and awoke, Billy and I were all tied up with little ropes and they were staked in the ground. Lucky I’m a wizard or we would have been in a bit of a pickle. I was pretty tempted to turn all the pixies into something else but there’s just too many. I’ll just have to take them for another day. We should reach the Jagged Rocks in the morrow and be out of Trixie Pixie country by nightfall. I’m still really annoyed by that acorn. They can be very powerful things and I don’t like it being unaccounted for.

I was glad when we finally made it through pixie country, that was much to my relief I could do with some sleep.

After a quiet night’s sleep we headed off at dawn’s crack and made The Jagged Rocks by noon. We finally got across the jig to the third jag and indeed, there was a cave. A rather fat and smelly troll greeted me at the door. His name’s Dave. He handed me the package first, but I really wish he hadn’t invited me to lunch. I didn’t wanna be rude, even though trolls eat the most disgusting things and can’t cook even if the things weren’t disgusting to begin with. We had slug slime toadstools, followed by cave possum splat, then frogspawn sorbet as a palate cleanser, finished with a nice piece of black coal marinated in dog-sized rabbit spew. I don’t feel very well. He asked me to stay the night but honestly, I’m worried he’ll wake me up with breakfast in bed.

We need to get off the jag and the jig before sundown though or this will be a most treacherous evening.

We rode fast and true, the package safely wedged between Billy’s massive horns and made camp at the edge of The Jagged Rocks. Needless to say, I skipped dinner that night. I was feeling a bit like I had a bubbly belly. That happens every time with troll food, vile creatures!

After a day of suffering the insufferable Trixie Pixies we finally made camp. Man do I wish I have my magic acorn. We settled by the fire. I sat awake while Billy snored, staring at the package. What was in it? Why couldn’t I look? The intriguement was eating me alive, and then finally something inside the box made a noise.

The odds were, it was probably some kind of creature for a potion, but my suspicions had been aroused mainly cos most creatures we use in potions can’t speak, and this one’s saying help me.

I opened the package and inside were 9 faeries from what appeared to be the same faery family. I asked who they were, and they were a tribe of cleaning faeries. Surly it couldn’t be, The Grand High Wizard was actively participating in the illegal fae trade! Well, I don’t care how grand or high the wizard is this is unforgivable.

I offered to set them free, but they said they like cleaning as long as no one expects them to do it and if I make sure the Grand High Wizard learns a harsh lesson, they will come and live with me and do all my cleaning. Hooray!!

I made it home pretty early. The mystic mind message between the Grand High Wizard and I was interesting this morning. Of course, he denied he knew what the package contained, and had the customary red-face ragey rant, but that didn’t mean he didn’t worry about the threat of me reporting his actions to The Order of Wizards. The Grand High Wizard should be held to higher standards than the rest of us and I made sure he was aware of that.

The cleaning faeries settled in quickly and made a home in the skirting board. In no time they had the place almost spotless. I think I’m gonna like living with them. I wonder if they know any cooking faeries too?

After a long week, I rest satisfied that I’ve made a bunch of new friends which love cleaning. The Grand High Wizard needs to be kept an eye on, so I’ll be doing that here on out and I learned to avoid troll food at all costs.

Anyway, now I’m gonna write some cool stories for you.

4 thoughts on “The Diary of a Wizard – Week Twenty Five”