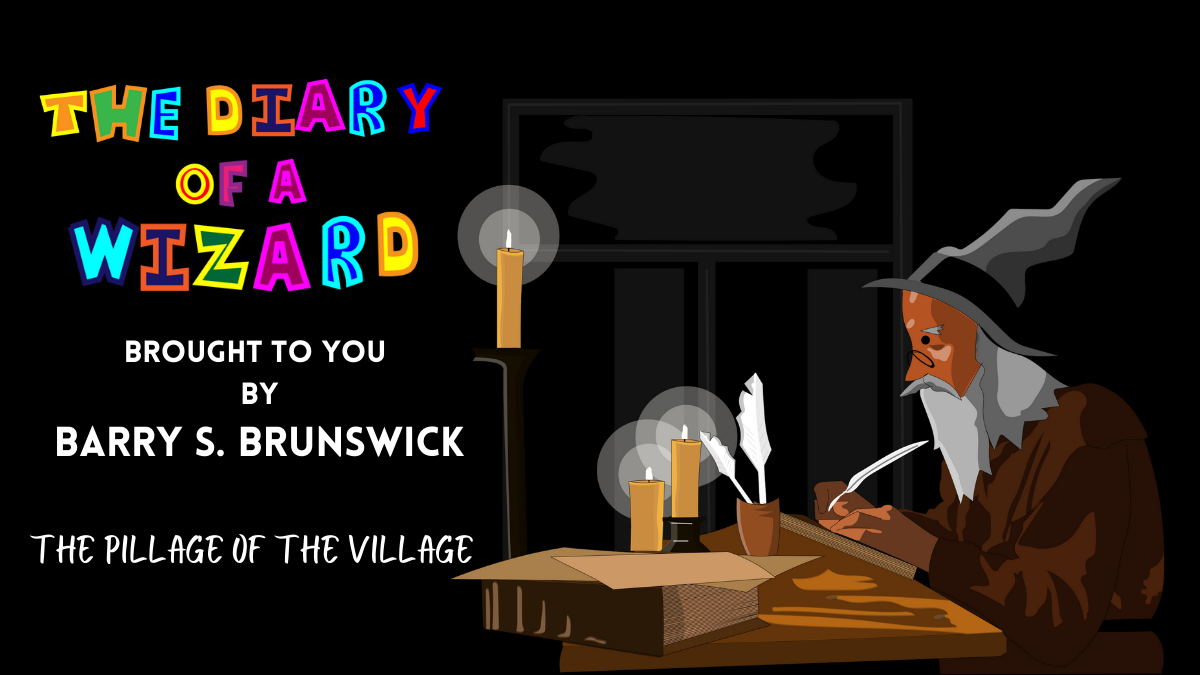 Hey friend! Welcome to the best blog about magical stuff that happens in The Enchanted Wood. This week I hear the village may be about to receive a pillaging. I’d better get my wizardy butt over there to see if I can help.

The Pillage of the Village: Day One

A squawky seagull pecked on my window this morning. When I opened it up, it flew inside, ate all my chips, pooped everywhere, then finally, settled down. Well, what else can you expect from a seagull than to behave kinda seagully? Anyway, he loudly told me that a blood thirsty, rowdy rabble was coming in to Deadude’s cove by sea and that the nearby village, which is inhabited by faeries that fish was in grave danger. They’re pretty big fae, and kinda rough cos they’re all seasalty and seafarey which is why they are called seafaeries, and surely they would put up a good fight, but I better make sure no harm befalls them as they are a peace loving village unless you’re a fish of course.

With no time to lose, and a day and half’s ride, I must call my trusty magical steed Billy, the oversized talking cockney mountain goat, grab my sword, my wellington boots, my tiny handbook of sea spells and make haste.

The Pillage of the Village: Day Two

Hasteth we did indeed make, and we arrived at Deadude’s Cove as it was getting late. Of course, not before an attempted robbery from a band of smuggler pirate types. I got into a bit of tangle but sent them scarpering shaikily scared like cowardy custards when I pelted them with acorns that I made magical.

Back to the task in hand, it seems the blood thirsty rowdy rabble had not yet made shore and the village I could see lit upon the hill was still and quiet. I’ll just settle on the sand and prepare. I may be able to see the deadly invaders coming, come morrow, but for now it’s too dark.

The Pillage of the Village: Day Three

First thing at dawns crack I started to prepare for the blood thirsty rowdy rabble to arrive and to my absolute dismay my little handbook of sea spells had vanished! Those blasted smuggler pirate types must have got hold of it. The Grand High Wizard’s gonna be mad when he finds out. I have no time to worry about it, I have to get to the village and make sure the seafaeries are prepared for a bloody and bruising battle.

The elder of the seafaeries village was Skipper Seadog Sally and she had all her tribe protecting the gates of the village as the seagull had told her what happening was about to happen long before he had told me about it. I made sure they protect the village and I’ll protect the shoreline.

I left them in the village and made my way up onto the cliffs to get a better look in the morrow.

The Pillage of the Village: Day Four

I awoke at dawn’s crack with 11 ships shaped like dragons heading towards the shore. These were Viking marauder ships and there was 137 Vikings from what I could count. A song rang out:

Well, this is problematic cos everyone knows real Vikings didn’t wear horns on their helmets therefore I can only deduce these are fantasy Vikings. A battle with such a fearsome fighting force will result in great casualties for the village and without my sea spell handbook I can’t just simply capsize the boats with a magical rogue wave. That leaves me one choice, to negotiate and hopefully not get beheaded by a battle axe. I have an idea that may suit all parties concerned.

I went and met the leader of the Viking marauders, of course I had to sword fight seven of the savages and turn 3 into hedgehogs just to get to have a word. Obviously, no harm came to any of them, but they now know it is a folly pursuit to tangle with a wondrous wizard. The leader’s name is Callista, and a mighty warrior she is indeed.

After the standard threats of beheading me, or burning me on one of the ships and such she was finally willing to have a chat. The fisher seafaeries brought down some fish and as one, the group enjoyed the night.

Boy does Callista like rum! We talked and negotiated and then came up with a plan before we passed out feeling a wee bit squiffy.

The Pillage of the Village: Day Five

With a fuzzy head I awoke and had a little think about stuff. I learned two things last night 1. A poet named the act, pillage so it would rhyme with the word village and B. There is no possible way to stop Viking marauders from pillaging villages. It’s what they do. It’s who they are.

Not only do Vikings love to pillage but they also love a good scrap, so it makes sense if they head to the other side of the bay and leave the peace loving seafaeries to fish. Across the other side there’s a pirate island, a colony of grumpy battle trolls and the fearsome emperor penguin army. There’ll be plenty to pillage, loads of fights to be had and it’ll keep them all out the way. They could probably spend the next 30 years fighting each other. Callista and blood-thirsty rabble of deadly invading marauders got back on their dragon ships and headed back out to sea.

“Hey wizard,” Callista yelled as she left. “Come and find me if you ever need some fine warriors to battle on your side, or you need to pillage some stuff, or you just wanna hang out and drink rum. Fare the well wizard, fare the well.”

I hit the dusty trail bright and headed back towards home.

The Pillage of the Village: Day Six

We made good time and then I waved goodbye to Billy and settled in for the night. I had just enough time to write some cool stories for you by candlelight. I love a magical quest and all, but it’s always nice to be home. I couldn’t get the fact I’d lost my spell book out of my mind, I know trouble is gonna come my way for that.

The Pillage of the Village: Day Seven

Well, it was again a successful week, and it seems I made a new friend in Callista. Something tells me it won’t be long til I see her again. I do have to once again question my taste in friends though, they always seem rather blood thirsty. She’s probably hacking up pirates as we speak. She’s crazy but what can ya do, she’s a mate?

I’m gonna write cool stories for you now, may your week be full of joy and magic!

1 thought on “The Diary of a Wizard – Week Twenty Nine”