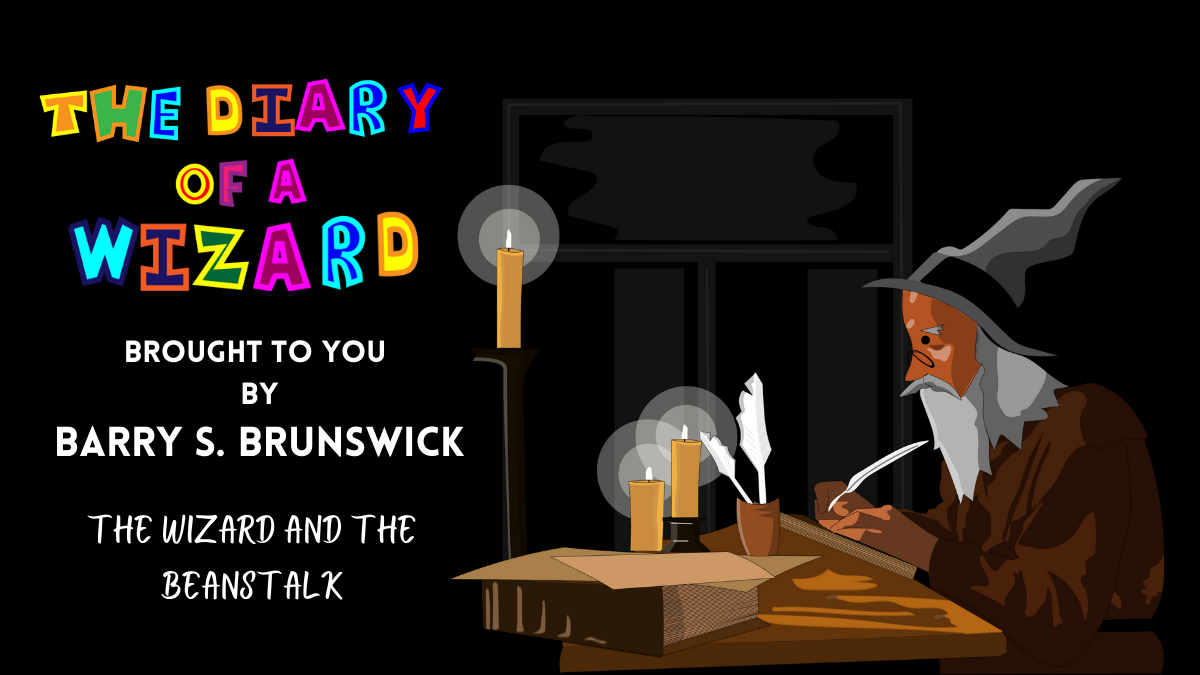 Hey friend! This week on the best blog for strange and magical happenings, it seems someone’s been growing magic beanstalks in The Enchanted Woods. I better check it out.

The Wizard and the Beanstalk: Day One

A little bird told me this morning—and I’m not trying to keep my sources secret—it actually was a little bird. It was a bluebird to be exact, but you know, one of those red ones—that a strange and magical beanstalk had been growing in the brambly part of the woods, and now it’s as high as the clouds themselves. The things I’ve heard about magical beanstalks make me certain this could be a problematic quest. I packed my staff and my sword for chopping brambles, my spare hat and summoned my trusty magical steed Billy, the oversized talking cockney mountain goat.

We’re all set to leave at sunrise, so we’ll head of bright and breezy in the morrow.

The Wizard and the Beanstalk: Day Two

We set off into the yonder at the breaking of dawn’s crack. We won’t be there til late tomorrow afternoon and only then if we ride like the wind! Billy has wind, more than he rides like it to be honest.

We slept by The Mystical Gate of Eternal Rudeness, where we will have to figure out the password in the morrow. It’s always changing daily you see.

The Wizard and the Beanstalk: Day Three

We got a good 29 winks and had a nice cup of tea before we decided to tackle The Mystical Gate of Eternal Rudeness. It can certainly be very trying on both your patience and your self-esteem.

“What do you want?” it harshly said.

“To go through the gate.”

“You ninny! You twerp! You plank! You muppet!”

I finally managed to get a word in, “I must say this is appalling!” I yelled. “You foul-mouthed, gatey, trash bag!” I gave it a piece of my mind and was pretty close to shaking my fist I’ll tell you.

“Oh yes,” it said. “That’s the password. Allow me to open up for you, kind sir. Just pop on through, you and your lovely goat, and I wish that you find much merriment and your destiny upon the other side. I hope you both have a most splendid day!”

Well, he changed his tune.

Through the gate we went, and continued through the thickest thicket until we reached the brambles. All along the road we could see the beanstalk disappearing into the clouds.

I had to jump down off Billy and hack my way through the jaggedy thorns all the way to the base of the stalk. It took my 3 hours and 47 minutes in total.

By the time I reached the base, I was exhausted. There was no way I would start climbing without a rest. So, camp at the base of the magical beanstalk we did.

The Wizard and the Beanstalk: Day Four

It took me 26 minutes to persuade 157 squirrels to carry me up the beanstalk. You didn’t think I was going to do all the climbing myself did you? I might perish by fallage and splattage in a demise most grisly indeed.

The plants towered high over our heads as did the grass. Up ahead in the distance I could see a menacing enormous castle upon the hill. This was a giant’s castle no doubt. I could tell by the fact it was giant.

The squirrels legged it right back down the beanstalk, and I can’t say I blame them for being shakily scared like a cowardy custard. After all, who apart from a complete idiot would go to tangle with a giant in his own domain? Oh yeah, a complete idiot like me!

I reached the castle by nightfall and camped below it. There’s was no way I was going in there until bright and breezy in the morrow.

The Wizard and the Beanstalk: Day Five

I awoke and got straight to work, gently and quietly sneaking under the door, lucky they hadn’t got a draft excluder. I snuck up the hall and into the kitchen. And low and behold there sat a giant that was 37 ft tall at least. The thing was the giant heard the footsteps from the souls of my pointy boots. He stood up and it was then I realised my guess was slightly off and he was in fact 39ft tall.

The giant rumbled, “Fee fi foe fum, I smell the blood of an Englishman. Be he ugly, be he smelly, I’ll munch you in half to feed my belly!”

Now I knew that he wasn’t smelling my blood, I’m not an Englishman, I’m a Enchanted Woodwizard!

The giant confirmed my suspicions.

“Who am I kidding?” he groaned. “There ain’t no Englishmen round here. There’s not much of anything round here.”

In a flash of wondrous wizardry, I appeared in a puff of blue smoke upon the table. I yelled loud and true. “Hey giant!”

“Oh, looky at you, you is a person with a pointy hat, are you a Englishman?”

“Can I eats wizards?”

“I wouldn’t try it, I’ll turn you into a hedgehog that’s the size of a mountain. What I will do however, is help you.”

“How can one so tiddly little do that?”

I went on to explain that what he needed to do was put his castle on the market and move to England where he’ll find plenty of food.

I helped him contact an agent to help us and as luck would have it, there’s a giant in England that likes eating fae folk and would love to do an exchange. This giant in England and that giant here. Everyone’s happy!

The Wizard and the Beanstalk: Day Six

I spent the night at the castle and come morning the giant was making phone calls and getting removalists organised. Obviously, it takes millions of removalists to move a giant, so it’s quite the logistical nightmare and he’ll be busy for a bit.

And because the squirrels scarpered, I borrowed a handkerchief from the giant, it was unsoiled I might add. I ran quickly to the edge and jumped. The handkerchief caught the wind and like a parachute I gently floated towards the ground. Letting out a whistle shrill and true as I went. Billy got into position, and I landed perfectly on his back.

He ran like the wind this time, for we knew if we didn’t rush, there would be no time for writing cool stories for you this week.

The Wizard and the Beanstalk: Day Seven

I made it back by lunch time after arguing with The Mystical Gate of Eternal Rudeness for a while. Billy was beat so I fed him and let him crash here. I spent the afternoon writing cool stories for you.

I thought of the giant situation and now I just realise, that I’ll probably get called out to stop the giant that eats fae folk soon, once he moves in. Oh well, as the troll would say, I’ll cross that bridge when I come to it.

1 thought on “The Diary of a Wizard – Week Twenty Eight”