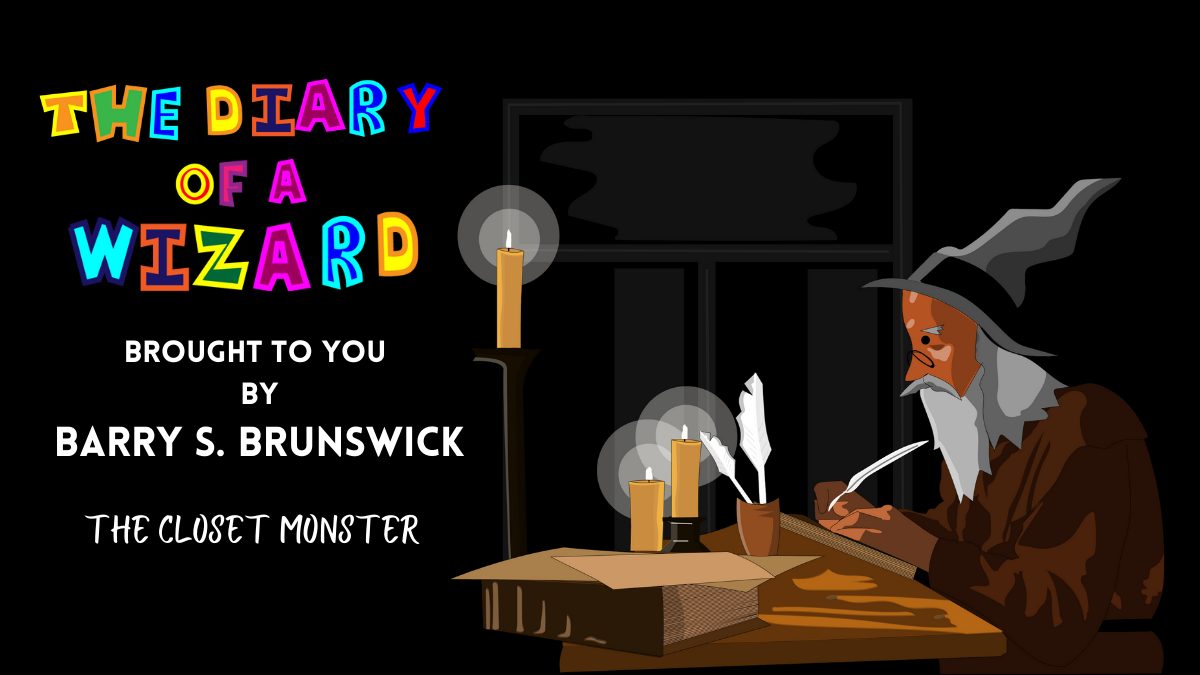 Hey friend! Welcome to the best blog about magical mayhem. This week Good King Burt of Gonkingshire has a problem with his son. I better help him out.

The Closet Monster: Day One

I was awoken by a hammering on my front door this morning. A frantic rider bearing the Gonkingshire coat of arms, was standing there. He told me that Good King Burt’s only son, Prince Simon, is having trouble with a closet monster of all things.

I summoned my trusty magical steed Billy, the over-sized talking cockney mountain goat and within the hour we were on the trail. You may remember Good King Burt from week 8 when I had to find a suiter for his daughter. [Check it out here if you didn’t see it] Anyway all things being well, I should make Gonkingshire by midday in the morrow.

We arrived a little later than advertised, I was attacked by a gang of bridge trolls. I mean they’re strong but very very dumb, so dumb in fact, that as soon as they burst out of their shadowy hiding place the sunlight hit them and turned them into stone. I did a little wondrous wizardry so that when the sun goes down, they will be restored to their original form. I’m nice like that.

We made the castle and Good King Burt, or Old Burtie as I call him, put on a feast and welcomed me with open arms. Billy got to hang out in the swanky stable with the other steeds.

Bertie told me that I had to wait until night time to investigate the closet monster. So, we put young Prince Simon in the spare room, and I settled down in his.

The closet monster was a no show that night despite me leaving the closet door wide open. It could be a possibility that there is not an actual monster, but it is a mere figment of a child’s imagination. While that may be a possibility, I have to be certain. What if the young prince gets gobbled up or loses limbs to monster munchage?

You know me, I never give up, so I’ll try again in the morrow.

Hung out with Bertie most of the day, but he can be a bore. He’s very reticent to listen to new ideas which makes conversations close to unbearable. The problem is see, kings can get a bit like that. If everyone has to do whatever you say, or it’ll be “off with their head” they have no real reason to listen if their over-inflated ego already has made its mind up.

Anyway, we feasted and made merry into the night, before I returned to the young prince’s room to try and catch the closet monster. This time not only did I open the closet door, but I went inside. I attached a Gandalf-style glowing wizardy crystal on the end of my staff and went deep into the haunted darkness.

To my surprise, the closet was huge, so huge in fact, it took me an hour to search it. It definitely felt a bit monstery in there, so I had to have my wizardy wits about me.

Eventually I found it; an enormous shadow, shakily scared, hiding behind a boulder. I know finding a boulder in a closet is pretty weird, but it was actually a cave, so boulders were a given. I tried to coax it out, but I never got my peepers right on it. It stayed hidden and there was no way I was going close enough to get munched by a menacing monster in the dark. I do have a plan however.

I better get some sleep, but I’ve put a little bait out to see if I can get it, to come to me.

The BLT sandwich bait worked well, and I must admit I near jumped a mile when the monster was sitting on the end of my bed this morning. It was 12 ft tall, had 67 eyes, two horns, a huge pointy nose, massive fierce teeth like barbecue skewers and claws like garden forks. Strangely as I reached for my staff to protect myself with wondrous wizardry, the creature didn’t munch me. In fact, it did the opposite of monstrousness and started crying. I don’t mean squirting a few, I mean full ugly crying, and out of 67 eyes many tears come and out of a huge pointy nose so comes much snot. I just handed it the bed blanket to blow its nose, but it seems all it wanted was a cuddle. I was a bit nervy but I gave it a whirl.

Finally, after 26 minutes of crying it started to talk. I was pleased it could talk.

The poor monster did seem a little lost. I told it I’d have a chat with the king and the prince and see if they’d like to meet the monster. The monster agreed to go back into the cupboard until I could talk to Old Bertie.

The king agreed reluctantly to meet with the monster in the morrow. He insisted he wanted 50 armed guards with him at all times during the meeting. I pointed out that would be a hell of a squeeze in the prince’s bedroom. In the end he agreed, a wizard’s word was enough though he insisted we both had a sword “just in case”.

I let the monster know the plan and then I caught 74 winks.

The meeting began at 10.37am and started with the king being shakily scared like a cowardy custard for the first 39 minutes, then he had a red-faced ragey rant, for the next 57, because frankly, he was embarrassed he got scared, because that is not becoming of a king and he would never admit to being wrong.

Finally, they chatted for a while and the king realised that although the monster looks fearsome, it is very emotionally unstable and would benefit from a friendship. So, it was agreed in the morrow the prince will meet the closet monster.

The meeting was spectacular! The prince delighted that not only would he not get eaten, but now he has his very own closet monster. He wanted a puppy, but I think we can say he’s happier with a pet fitting of a prince. And thus, so shall it be written, Little Prince Simon of Gonkingshire and closet monster, became lifelong friends!

I gotta get going if I’m going to have any time to write cool stories for you.

I got back late last night and didn’t write an entry. I just slumped into bed for 23 winks. I got attacked by 3-foot lizard people on the way back. I turned them into 3-foot hedgehog people, but don’t worry they will have turned back by now.

I spent the day writing cool stories for you. I think that life is a little better for all parties concerned thanks to my little adventure! I do wonder what next week’ll hold for me. I’m sure it’ll be fascinating!