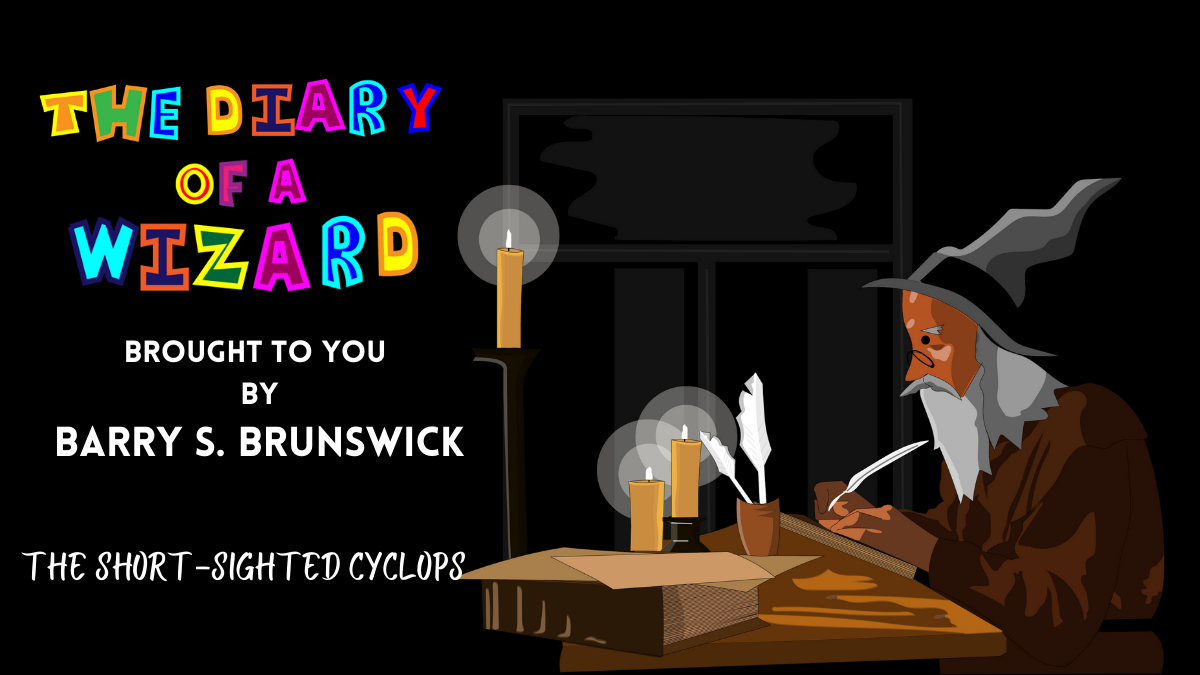 Hey friend! Welcome to the best blog for wondrous wizardry. This week I’m headed to the mountains to see my old mate, Percy the cyclops. It’s been many a year since I saw the old boy. Should be a blast!

The Short-Sighted Cyclops: Day One

The mountains are a two-day trek. I mean it would be half a day but my trusty magical steed Horace, says he has a slight hoof injury. Weird, as I saw him running with the ponies yesterday, but it’s important he looks after himself.

I’ve packed my staff and spare hat and will be heading off bright and breezy in the morrow.

Reached the valley today which is good going especially considering the quicksand I got stuck in. I had to use a blast of wonderous wizardry to escape. I got lots of sand in my pointy boots but washed it off in the raging river when I got here.

Who would have thought, dipping my toe in would attract a 30ft constricter river snake? It wrapped itself round my legs. I had no choice but to freeze it rock solid with a frozen potion. Don’t worry though, it’ll thaw out in the morning sun.

I’ll get some sleep here and should make the mountains by early evening in the morrow.

Made the mountains, of course not without a share of troubles. You can’t go anywhere in The Enchanted Woods without trouble. We should probably rename it The Troublesome Woods.

First there were the vampire bats that like hanging in the daytime. They wanted a wizard blood snack. I made a wondrous shimmering force field, and they were foiled and flapped off. Then I bumped into the mischievous Faeries Three and they tried to get me all tiddly with a potent potion. I changed it into a cup of tea, and them into hedgehogs. Don’t worry though, they’ll turn back soon when they’ve learned their lesson.

Finally, I made it to Percy’s place. It was great to see him, but he struggled to see me. I had to make myself known with my voice, but then he is 763 years old. We had a bite and a natter before bed. It’s always such a struggle to get up on his table, as he is 27ft tall. I only need one crumb of his bread to be belly stuffed to the brim.

Tomorrow we’re going out to try and find some diamond trees.

Percy was really struggling to get around today, I mean he’s always struggled with depth perception, but he can’t see where he’s going at all nowadays. And when a 27ft cyclops stubs his toe, the scream could start an avalanche. We quickly gave up as I was starting to convince myself he was about to take a tumble down the mountain, where he’d be certain to meet a grisly demise by fallage then splattage.

I told him I’ve thought of a way I just may be able to help him.

We tucked into some food and made merry. He’s such an awesome guy. I’ve gotta help him if I can. I can’t have him becoming a cyclops pancake on the jagged rocks below just cos he went shopping now can I?

Ducked out early this morning to see a dragon about some glass. He’s my buddy Alfredo, we flew to the sandy beach and with his hellishly hot dragon’s flame he made a huge piece of glass. Then he flew me to the smithy, the man that makes metal things, his name’s Smudger.

When I’d finally finished polishing it up, I gave him his gift. He said it was the fanciest monocle he’s ever seen, and now his vision is so clear, he can see the little faeries that ride around on a mosquitoes’ back.

I couldn’t stay all day, or I would never get round to writing cool stories for you, so I left as early as I could. I tell ya, he was so happy as I left, he winked at me, well maybe he blinked, I couldn’t quite tell.

I made the bubbling marsh by sundown and sat right in a speckled land lobster’s nest. They haven’t half got a nip on them let me tell you. My bottom cheeks bled for a whole hour!

I cursed Horace half the day today, it was raining cats and dogs and those things hurt if they land on your head. Bit of luck I packed my armour plated umbagig to protect my noggin. My feet were killing me by the end of the day, and it was those kinda things I got a trusty magical steed for. But maybe his hoof will be better by next week.

I settled by the mushroom patch for the night, but I had to enchant the fae that live there, or they would steal my hat, or rifle through my bag, or even take my staff and then the kingdom could befall a most terrible fate. I made them whistle snore the whole night through, hope the spell holds.

After a measly 72 winks of sleep I made it home by lunch time. There was no sign of Horace anywhere. That’s great! I’m glad his hoof is better now. I may well need him next week. I’m exhausted, but the thought of Percy’s smile makes it all worth it.

Now I’d better get cracking and write some cool stories for you.

See ya next week for more wacky fun, friend!!