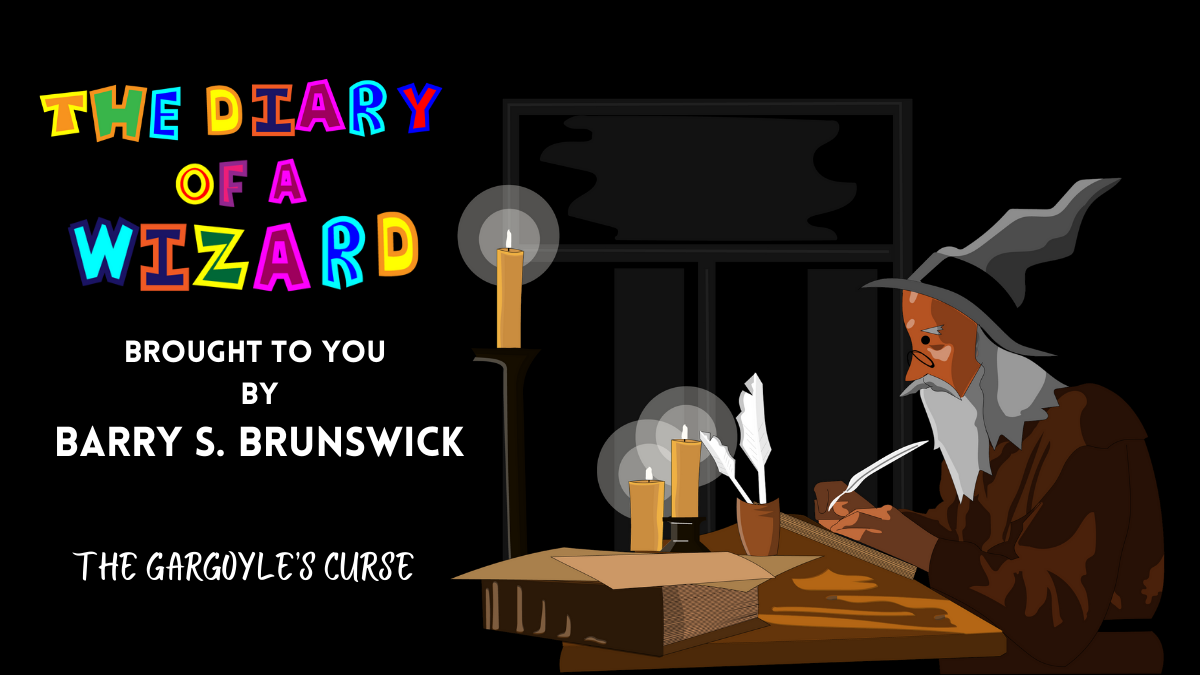 Hey Friend! Welcome back to the best blog about wizardy things. This week I promised King Harold I’d get the bats out of the tower tall at the top of his castle. I know it doesn’t sound like the job for a wizard, but they are vampire bats and they’ve been making meals out of the kingdom’s livestock. The unicorn farm’s been decimated.

The Gargoyle’s Curse: Day One

I was gonna take my trusty magical steed Horace on the journey, but he pointed out it was a highly dangerous task for him because they have been targeting unicorns. I thought he sounded like he was just shakily scared, but he was right when he said he could compromise the whole adventure. He does have a point.

I guess I’ll have to take The Rocky Road Less-Travelled for a whole day on my own.

I set out after lunch so I can make the Stinky Marsh by sundown. Not the best place to stop to be honest but The Rocky Road Less-Travelled is a bit hard for sleeping on.

I reached the Stinky Marsh just in time for the fluffing frogs to sing their nightly songs. Fart sounds rang out across the marsh, and the smell lingered gross, but luckily, I packed my nose peg. After a while the farts sound almost musical. I’m gonna just sleep beneath the stars.

Got a good night’s sleep though, if I never hear another fluff again, it’ll be too soon. I prefer the belching swamp myself.

On wobbly legs and knocking knees and a good deal of blisters I finally made the castle. When I saw my old mate Harold smiling at me, it was all worth it.

We feasted and of course, made merry late into the night.

The bats must wait for the morrow.

The bats had been at it again and taken one of the king’s racing rabbits. I guess I better get up into the tower tall and see what I can do.

Luckily the bats were still asleep and phoning for a pizza with extra garlic bread, soon got them out of there as sun fell. They hate garlic bread.

I was about to climb down the tower when I heard a tiny voice saying, “Help me. Help me!”

I looked around but it was dark, I couldn’t see where the voice was coming from. Guess I better catch 74 winks and come and check it out in the morning.

Got up early and grabbed a nice cup of tea and some marmalade on toast before scuttling back up the tower tall.

Sure enough, I heard the voice again. I poked my head out the window and sitting just above it was a stone gargoyle. A talking stone gargoyle for that matter. It turns out the gargoyle, who’s name is Raven, isn’t really a gargoyle, this is clearly a curse.

She said she’d been up there for 57 years. I have to figure out who made the curse, to break the curse, and she’s not too sure who did it. Apparently, she’s upset a lot of people.

I mystical mind messaged The Grand High Wizard, and he was familiar with someone that would do this kind of curse. I need to pay her a little visit.

Went to the houses on the edge of the kingdom to find Doris the fortune teller and part time sorceress, apparently, she likes cursing people that ever doubt the fortunes she tells.

She be all like, “Ha ha! I told you you’d be a gargoyle for 57 years!” Not a nice person. I think I can handle her. A part time sorceress can never beat a pro wizard.

I asked her to break the curse, she refused. I turned her into a fluffing frog while she reconsidered her discission. Obviously amongst the parps, she stinkily agreed, so I changed her back.

She spat in a bowl and put in a lock of hair, cracked a weird egg suddenly there was a puff and a stinky pungent potion was in the bottom of the bowl. She put it in a tiny bottle and handed it to me.

Now all I have to do is give Raven a whiff of the stink juice, and she’ll be good as new, whatever that is. Can’t wait to find out!

Wasted no time this morning, ran up the lung bursting 857 steps to the top like they weren’t even there. Leaned straight out the window, twisted my body and looked up at her. I opened the bottle and the stinky potion steamily seeped into her nose.

I thought she’d change immediately but I was wrong. You would have thought gargoyles can’t spew up but indeed it seems they can. Certainly could have done without an eyeful of that.

Suddenly the stone crumbled to dust, of course landing in my face and beard, leaving me looking kinda snowmany and choking.

She told me she had to go and see her family cos you know, it’s been 57 years, but as a favour she’ll fly me back in the morning. That’s great! I’m not sure I’ll want to camp in The Stinky Marsh, I can’t handle anymore fluffiness.

Raven gave me a ride back first thing just like she promised. She so happy to be free, I feel kinda cool about it. It must suck being cursed in stone for 57 years, though sometimes living the life of a wizard, the idea may appeal to me!

I’m gonna write some cool stories for you now.