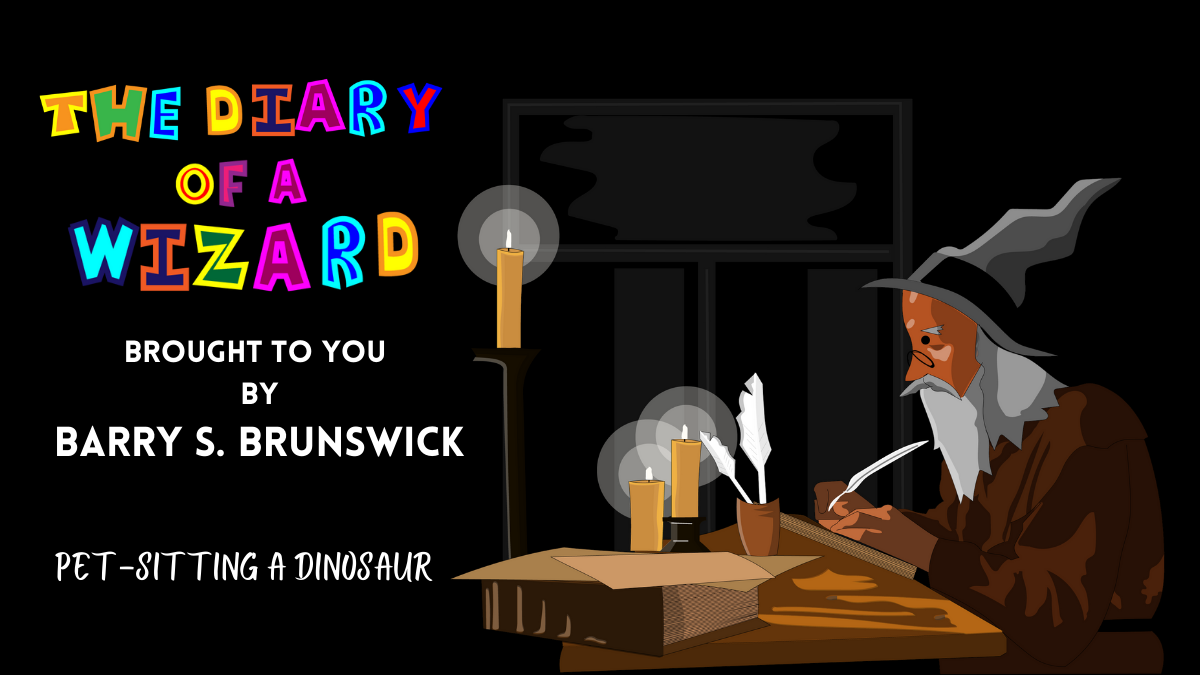 Hey friend! Welcome to the best blog about stuff that wizards do. This week I’ve got to pet sit for Henry the sasquatch who lives in the shady part of the woods.

Pet Sitting a Dinosaur: Day One

I received word a couple of weeks ago that old Henry the sasquatch had to pop out of town for a few days. He asked me to watch his pet, Tiddles. I jumped at the chance, it’ll be nice to get a change of scene for a few and I really do love dogs.
I’ll head off early in the morrow. It’s not too far.

I’ve been looking everywhere for my trusty magical steed Horace, he must have forgotten that I asked him to take me. It’s weird, but these things happen I suppose. Guess I’ll have to ride my feet over there.

I arrived at Henry’s a bit late, I got slightly delayed, but when a giant trappy door spider wants to make a snack out of you, it takes some time to untangle. I had to turn it into a tiny money spider to stop it devouring me from the inside out. Don’t worry, it’ll turn back to its normal size soon, it’s normally as big as a wombat.

I removed all the sticky web which took an age and then moved on. Henry was packed and ready to leave. He looked pretty anxious. He told me not to disturb Tiddles tonight as she’s sleeping in the kennel. He left me a badly scribbled list of instructions and scampered off.

Guess I’ll catch 39 winks and see what the morrow brings.

Studied the list over breakfast, this is what it said:

Strange list I thought, not sure Tiddles is a dog.

It didn’t take long to realise that Tiddles certainly wasn’t a dog, judging by the size of the kennel. She’s a 29ft long triceratops! I would say I took her for a walk, but she took me for one. And it wasn’t long before I realised why I needed the big poop bags. I dunno about poop bags, I need a shovel and a wheelbarrow! Well eating 172 cabbages and 749 carrots a day will do that to you.

I fed her breakfast after the walk, then she wanted to play fetch in the garden. She came bounding up wagging her stumpy tail holding a whole fir tree in her mouth. I had to use my wizardry to wear her out.

She ate her carrots and had a second walk. I think we’ll go for a longer walk tomorrow.

We did go for a longer walk today but after breakfast this time. I’m glad Henry left all these cabbages. It does make me wonder where he gets them from. I suppose that’s not my problem.

We walked in The Valley Lost for a few hours. We had so much fun, but Tiddles nearly squished me pancake flat when she rolled over for a belly rub. I had to put corks on her horns after nearly getting into a bad fetch accident. They’re sharp as you like, and she could easily accidently run me through.

After dinner she wanted to sit on my lap, I had to jump up quickly. I decided to put her back in the kennel quick smart before she decides to sleep in my bed too.

Henry will be back late in the morrow then I guess I can head home.

Tiddles decided to come and wake me up this morning, which was very thoughtful of her. She licked my face and her tongue is so big it sent me sprawling out of bed and onto the floor. I was covered hat to pointy boots in dino dribble.

I fed her her cabbages and took her for a walk and when we got back we had snuggles and a nap. I’ve really grown fond of the old girl.

Henry got back after she had settled in the kennel for the night. He had a big box with him.

I could hear scratching noises coming from within. I asked him what it was, but he just said it’s a surprise and I should wait for the morning.

I can’t wait to find out what it is!

Tiddles was bouncing like a bunny in bubble shoes when she realised who was in the box. It’s a little cute T-rex pup for her to play with. They spent the next two hours stomping through the woods and chasing each other all around. [Read a cool poem about a t-rex here]

After an action packed few days, I’m exhausted and really need to head home so I can write some cool stories for you.

I’ll miss tiddles and I’m glad she has a new chum to play with. I hear dinosaurs can get pretty lonely at times.

I waved goodbye and hit the dusty trail, of course not before getting almost drowned in triceratops and t-rex slobber. I should dry out in the sun pretty quickly.

Well, I made it back no problems, well minimal problems for The Enchanted Woods at least. A 7ft wizard eagle tried to steal my hat. I turned it into a sparrow, using words so secret, if I was to write them here, The Grand High Wizard himself would turn me into a hedgehog. Don’t worry it’ll turn back in a few days once its learned its lesson.

I sat and wrote cool stories for you for a while though the thought could not escape my mind, that I won’t be able to pet sit for Henry again. 172 cabbages and 749 carrots is one thing, but serving up horses for a T-rex will be just too much.

I’m glad Tiddles has a friend now and I will miss her. If I go and see them, I’ll just have to make sure Henry’s around.

That’s it for now, see ya next week friend!!