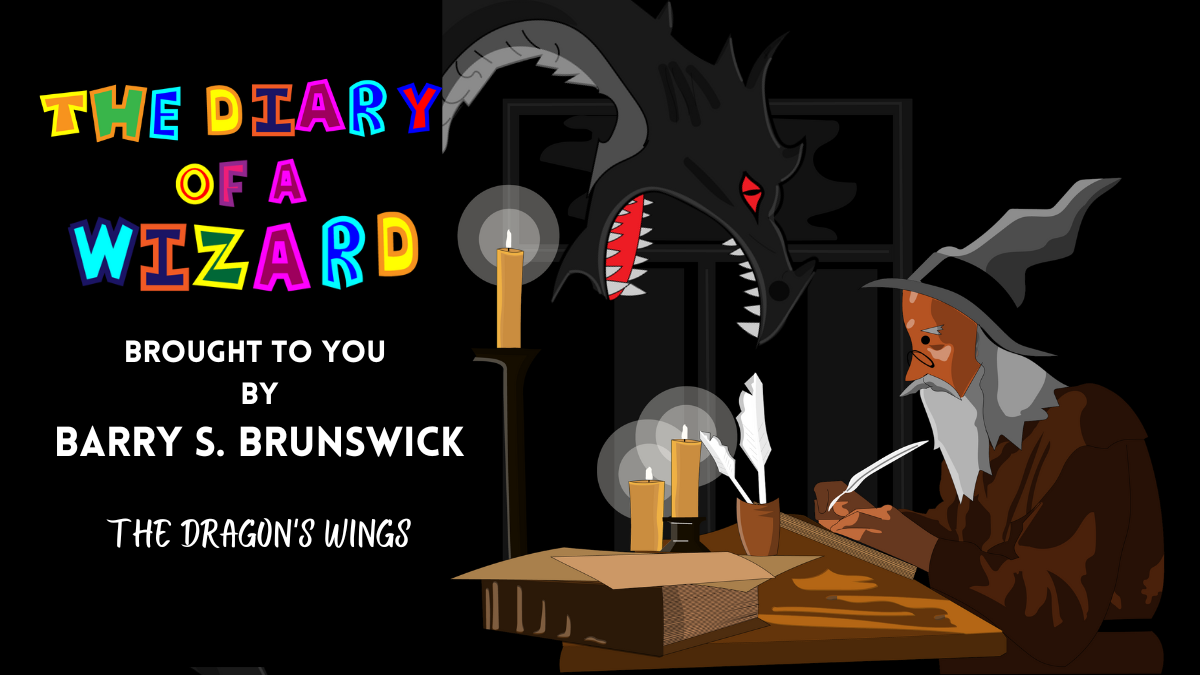 Hey friend! Welcome to the blog that hogs all the magic and giggles for itself, The Diary of a Wizard. This week I’ve gotta help a dragon that’s lost its wings. There’s always a slight risk of being eaten, or burned to a crisp, or turned to instant ash by hellishly hot dragon’s fire in a demise most grisly indeed, so I’ll need to keep my wits about me.

The Dragon’s Wings: Day One

I was awokened by a loud knocking on my door this morning. It wasn’t your usual knock, but one that sounded like it was delivered by a monster of some description. Kind of boomed through the house and nearly knocked my door off its hinges. I grabbed my sword, not in case it was a monster or anything, but just in case it was a door-to-door sales person. That always makes em run away shakily scared like a cowardy custard. Much to my relief, it wasn’t a sales person but in fact, an extremely large, toothy, monstrous dragon!

“I’m in all kinds of trouble, may I be so bold as to ask a favour?” she roared.

I jumped a little but managed to hold myself together. “Sure thing, fire away… Erm, I mean tell me what the problem is.” I thought it best not to encourage fire from a dragon.

“I’ve lost my wings.” The dragon started to weep.

“It’s okay, lets have a nice cup of tea and see if we can find a solution for your problem.”

“Alright then, but I have to be honest I’m not a massive tea fan, I prefer vindaloo,” she sniffed all upsetly.

I made the tea and rather than sugar, I offered one lump or two of extra spicey curry powder which cheered her up no end.

It turned out that the dragon whose name is Sally, had been in a bit of a scrape while trying to plunder The Golden Kingdom. She got the gold and succeeded in eating both the princess and the king, but she accidentally clumsily flew too close to a ceiling fan and it tore her leathery wings up. She had to leave her new gold stash behind and walk to get help.

I offered her to stay the night while I came up with a solution. I think she’ll just about fit if I move all the furniture into the other room. We chatted long into the evening before we hit the hay.

We woke up bright and breezy and set to work. First, I had to rummage through my old bookshelf tryna find what I sought. 3.59 hours later—I have a lot of books—I found what I was looking for and handed Sally the catalogue of wings that she could choose from.

She flicked through it and stopped on page 394 where she found the wings she wanted.

So, now I knew what I needed to do and the ingredients I’d need for my magical potion.

We headed out to find the few foragings I didn’t have in stock, obviously for once, nothing would try and tangle with me on our journey cos well, I was with a fearsome and monstrous fire-breathing dragon that could turn them into a smouldering cinder by hellishly hot dragon’s flame whenever they chose.

It was a long day but finally we had everything we needed, and I would make some magic first thing in the morrow.

We got up somewhere near dawn’s crack and got set to start. I just had to make sure Sally was certain she knew which wings she wanted. This is after all, a permanent spell unless your wings get ripped off again.

“You’re certain you want these?”

“Yes, they simply have to be the ones, I wanna be fabulous!”

“You know these aren’t the best flyey wings though, right?”

“But the pretty colours!”

“Not these super cool sparkly dragonfly wings?” I pointed at the page in the catalogue.

“Nah, I’m good.” It seemed indeed her mind was firmly made up.

“Right you are, butterfly wings it is!”

I set to work bubbling up the potion. It would take 5 hours and 13 minutes precisely for it to work to full effect. It really does whiff the place up a treat.

By the late afternoon the potion was ready and I poured the steaming and pungent potion out into a massive bowl. Now normally I would say let it cool first, but it really makes no difference to a dragon obviously and Sally skulled the whole thing, down in one.

I warned her that it would feel a little tickly and not to touch where the wings would grow, and come the morrow morn, her new wings would be ready to go.

We hung out long into the evening and had many belly laughs, Sally sure is a blast (excuse the pun!) and much merriment was had by all. I even cooked her favourite, goblin vindaloo with extra chilli. We hit the hay, and Sally can’t wait to check out her new wings after dreamy time.

I awoke to the morning to gasps of amazement and giggles of joy, as Sally stood trying to get a proper glimpse of her wings in the mirror. She was most excited.

“Can I try them? Can I, eh?” She jumped up and down like a kid on Christmas morning.

“Yes of course, give me a jiffy and I’ll get ready.”

That jiffy was a little longer than a jiffy cos I had a bit of bubbling belly to say the least from the curry, but eventually, with a cup of tea in my hand, we headed outside. We had to walk a small way to a clearing so she could safely test her new wings.

She flapped, and then flapped harder still, and then flapped the hardest yet, and finally, she lifted off the ground. She kinda flapped round in wobbly out of control circles and had to adjust big time every time there was a gust of wind, but when she finally came in to a bumpy landing, she was delighted.

“Oh, I can never thank you enough! I love them. I really really do!”

I had to wonder why if I’m honest. If you’ve ever sat and watched a butterfly, I mean if you can get passed the beauty, they’re really bad at flying. It’s really a wonder how as a species, they’ve last so long.

She couldn’t care at all that they were bad for flying, just she looked pretty which I suppose makes sense where you scare anyone who sees you half to death. That’s bound to take a toll on the old self-esteem in the end.

She practiced some more and grinning wide, we went back to mine for the night.

We awoke and had breakfast and before long Sally, was ready to be on her way. She had a gold stash to chill out on and dungeon full of prisoners to eat.

I watched, waving as she prettily yet very erratically took off up into the sky. I hope she doesn’t get hit by a bird.

Now I need to do my chores, I’ve really been neglecting my duties recently and I’ve gotta move all the furniture back. Lucky the cleaning faeries take care of most of the work round here. No, they are not slaves, it’s what they do, that’s why they’re called “cleaning” faeries and not “slave” faeries to be clear (I met them in week twenty five – click here if you wanted to check it out).

I hit the sack after a long day and now I’ll catch myself 39 winks.

I woke up a little later than usual and took a stroll, not for a quest or any type of mission for once, just a nice leisurely stroll. It would have been way more leisurely if I hadn’t been attacked by a 27ft wood shark, they’re kinda like normal sharks, but they live in the woods and kinda swim through the soil, see. Luckily for me I brought my handy shark repellent in my leather satchel, or I would have certainly met a demise by fearsome wood shark jaw chompage!

I made my way back, still a little shaken but I took away my nerves with a little self-care and made some cakes. Did you know if elves do that it’s called elf-care!

I had a little read, peering over the top of my reading glasses by candlelight and got all snuggly. Think I could use some winks.

Well, another week ends, and another problem solved, well, kind of solved anyway. I’m pretty sure it won’t be long before Sally, the butterfly dragon, flies straight into another ceiling fan and will knock on my door for help again. I’ll definitely insist she gets the sparkly dragonfly wings next time. They’re fancy and functional. But all that matters is she was a happier than a hopscotching hippo holding her head on ha haing with heaps of hilarity. It just goes to show, that sometimes beauty is only skin deep or at least wing deep!

I have a funny feeling I may see Sally again, someday soon.

Anyway, I’m off to write some cool stories for you now. I hope this week you find YOUR butterfly wings, metaphorically of course, I just mean I hope your happier than a hopscotching… Yeah you get the idea!