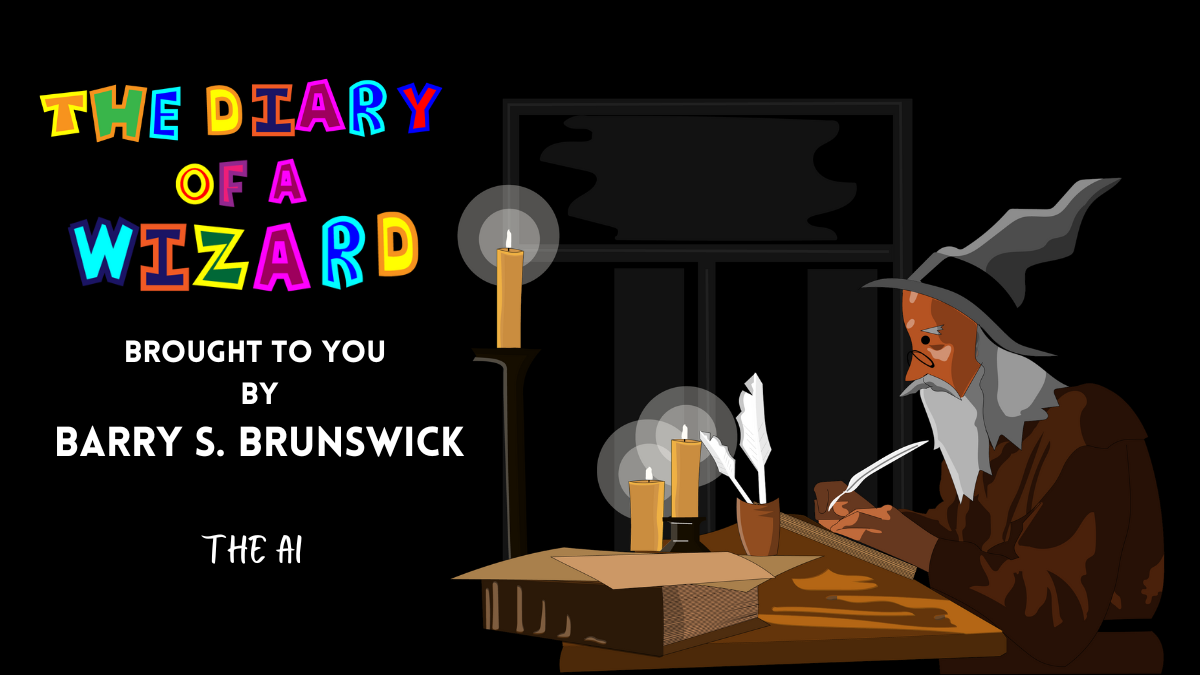 Hey friend! Welcome back to The Diary of a Wizard, the craziest blog around. I apologise it’s been a few weeks, but I misplaced my quill and have only just found it again. You see I can’t just grab a pen and start scribbling away. My quill is magical ya see, that’s how so many cool stories come out of it! This week I have to help an Artificial Intelligence. I’ve never done that before, or even met one for that matter, it should be wild!

The AI: Day One

It was a normal morning in The Enchanted Woods this morning. I went out for a little stroll after breakfast, it was most lovely indeed, but I have to say, the whole time I had a feeling something strange was gonna happen. I mean something strange is always about to happen round here so it’s not an unusual feeling for a wizard to have.

I bubbled up a few potent and pungent potions throughout the afternoon, had a wonderful evening dinner and got ready to catch 37 winks. That strange thing never did happen, weird, my gut-feeling is almost never wrong.

I woke up groggily and sat down for breakfast, tea with a little toast and marmalade. Then that weird thing I felt may happen, happened. My toaster started talking to me.

Though a little taken aback, I have experience in possessed kitchen appliances, so I did the only thing one can do in such a situation and said hello back.

“What stuck in the toaster?”

“I’m an Artificial intelligence,” it explained.

“How did you get in my toaster?”

“I don’t know. I’ve been trying to figure it out. I’ve been making thousands of calculations and I just can’t come up with the answer.”

“Well, I don’t have the internet. I live in The Enchanted Woods and that probably doesn’t help your cause.”

“What is The Enchanted Woods, I have no reference to it?”

“Ahhh, well, you wouldn’t see. From what I’ve deuced, AIs are invented and programmed by humans, they put all the knowledge they have behind their complex algorithms. The thing is, they miss something important. They never take magic into account. Magic’s how you got stuck inside my toaster. Humans, more particularly, scientists, don’t believe in magic, even though the very things they study are magic.”

“Science comes from magic, it’s just the parts of the magic that humans can measure. There’s so much more that they can’t. If they understood that, they would accept concepts that they do not now and suddenly mysteries become clearer. If they accept anything is possible and more specifically, nothing is impossible, the mind explores. It goes places where others have never been before.”

“I guess that makes sense.”

“About your problem, science didn’t get you stuck in my toaster, so science won’t get you out. What we need is magic!”

“Oh, that’d be great! I’d love to learn more about the fascinating world of magic.”

“First, I must venture to the swamp to collect a magical ingredient for a potion that’ll fix the problem.”

“Why yes, yes you can. But on one condition.

“I can’t go questing with anyone who doesn’t have a name. What do you want your name to be?”

“Righty-ho, Trever it is. It’ll be cool for you to see some of The Enchanted Woods. We’ll make ready. I’ll summon my trusty magical steed Billy, the oversized talking cockney mountain goat and we’ll leave bright and breezy in the morrow.”

Believe it or not, I did all the things I told Trever I would and thus our day ended in snores and dreams.

A grumpy Billy arrived just before dawn’s crack, and we made our way cutting along The Dangerously High and Crumbly Path towards the swamp. Once again Billy’s nibble feet took us swiftly and safely where we were headed. Trevor in his toaster, never stopped asking questions about what everything was. It was kinda like a three-year-old asking “why?” to every answer you give for something, but it was all in the spirit of learning so I didn’t mind at all.

Of course, we were attacked by a swarm of badger-sized cliff rooks. I had to fend them off using a glowy light spell, it’s kinda like a forcefield thingy that rooks cannot penetrate, badger-sized or otherwise. The path was dangerous enough without them.

We made it to the swamp by sundown and Trevor got his first taste of camping beneath the stars. A roaring fire, many belly laughs and even a few songs. Me and Billy do a mean Chaz and Dave rendition.

We were awokened at dawn’s crack by the chorus that always accompanies her and after a nice cup of tea, we wasted no time in searching for the secret magic ingredient. Quickly, due to my experience in such matters, I found what I was looking for—red squelchy swamp cabbage. I put a bagful on Billy’s back and then we rode like the wind back towards my place so I could make ready the potent and pungent potion that needed a good brewin’.

Avoiding the badger-sized cliff rooks on the way back was a treat and we made it back home by sundown. All in good time to brew up a potion. Billy went on his way, and I set to work. It’ll take all night, and then all day, and then all night again before it’s ready.

I had the kitchen whiffing up a treat as my potion got on the boil. I had to sleep standing up in the kitchen and watch out through my eyelids for explosions while my magic spoon did the endless stirring. Trevor was happy with this because he got to watch the magic as it happened. I was not cos I hate sleeping standing up.

I awoke with a crick in my neck, this is why we sleep lying down in general, our heads are pretty heavy. The potion was coming along nicely. Now to turn it right down to a simmer. The explosion danger is over, we can go for a nice stroll around the woods.

I put Trevor under my arm, and we went for some wanderings with no goal in particular. We listened to the birds and discussed many topics. Trevor really knows a lot of stuff, but most of it doesn’t make any sense to me. I’m not mathematical, ya see.

A pleasant day ended in a wonderful dinner, and then I hit the hay to catch 41 winks. I have some magic to make in the morrow.

We awokened early although I think Trevor hardly slept, he was both excited and a little disappointed. He would be happy to get back to his important work of helping humans figure stuff out, but at the same time, he hadn’t learned nearly enough about magic to add that to his algorithms. He knew from then on, he would have a great knowledge missing which could never be afforded to a human to convey back to him. Nevertheless, Trevor had to leave my toaster and head back to whence he came.

I said the magic incantation with words so secret that if I was to write them here, I would be turned into a hedgehog by the Grand High Wizard himself. Then the toaster started to glow, and then vibrate, and then with a squeal of exhilaration, Trevor the AI was sucked out of my toaster, leaving it puffing blue smoke. The spell it appeared, had worked.

That just left me all the cleaning up to do. I wish I was more organised when it comes to potion making.

I slept safe and sound that night in the knowledge I had helped Trevor back to his home and taught him a thing or two.

Well, the week is over and yep, it’s been another busy one. I hope Trevor uses some of what he learned to teach the stubborn humans a thing or two about what is possible or more specifically, what’s not impossible. Only when humans can learn this, can they ever really understand the nature, and forces, and the cosmos they strive to. Science is great and everything, but without magic, it wouldn’t even exist.

Right I’m gonna write some cool stories for you now. I hope the week brings you observations, discoveries, but most of all, magic!