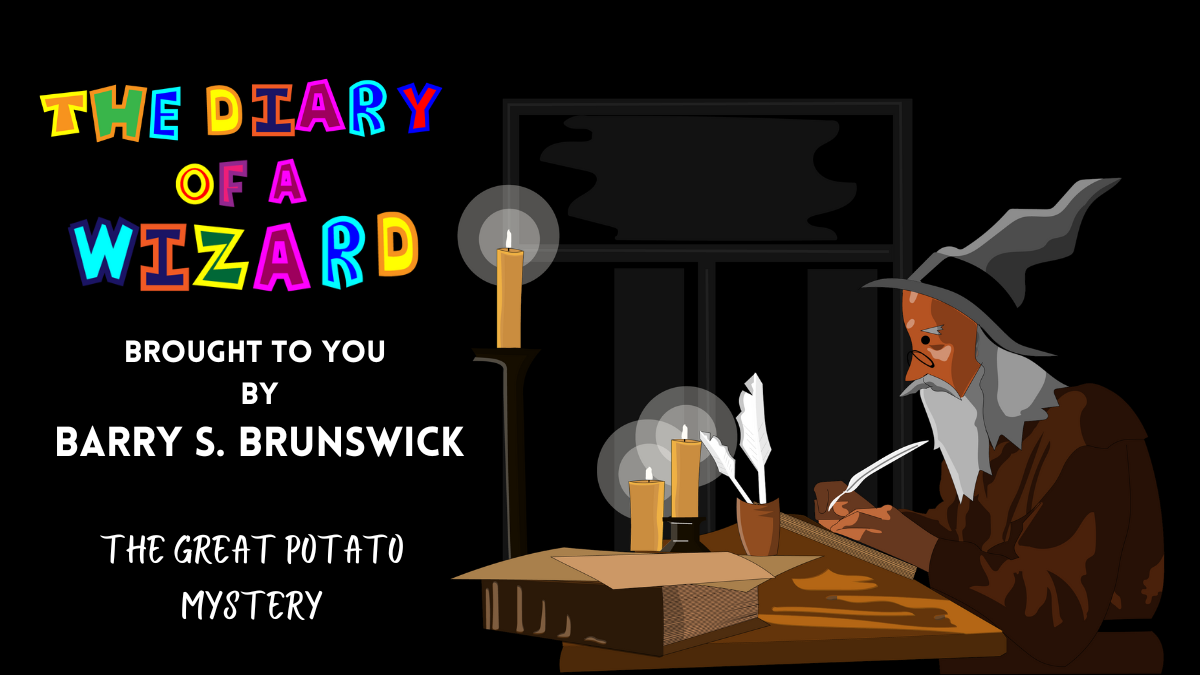 Hey friend! Welcome to the most wizardist blog around. Sorry I’ve been a little lax in bringing you my magical memoire, it’s just, well, I’ve been writing cool stories for you, of which big news will be upcoming! But for now, I’m back with a bang, and this week, I have to deal with the mysterious happenings in the weird world of potato farmary. Of course, it’ll be weird, it’s The Enchanted Woods, remember? And round here, that’s just how we roll.

The Great Potato Mystery: Day One

My week started as it so often does, with a frantic wrapping on my door. It was the potato farmer, and he has a big problem. Potatoes keep vanishing. I asked him a few questions and we quickly ruled out some potential culprits. First, the potato hawk could have done it, but they won’t be around cos the farmer has a potato hawk hawk ya see, to scare the potato hawks away. “Maybe it could be the three-toed long-fanged creeping veggie mole,” I hear you cry, but the farmer stops them on the boundaries by offering them turnips and parsnips and carrots and such. They never get as far as the potato field. This is showing certain signs of foul play!

I packed my things and me and the farmer, (his full name is Farmer Potato, as often beings are named after their craft around here) made ready to leave for the farm bright and breezy in the morrow.

I was awokened with a start somewhere around dawn’s crack. The Farmer had only gone and sneakily smuggled in his rooster last night to make sure he got up. Couldn’t use the alarm on your phone like a normal person, could ya mate? The place stank of fried food cos he was making hash browns and potato tea.

He looked at me and went, “Do ya want some potatoes, me wizaard?” he had an English west country accent, of course, like all farmers in my head. “Potato tea, I loikes that, I do.”

“Oh,” he says, looking all sad. “It is made with the fineest potatoes, ya know, me wizaard? I grew em meself. Vintage crop this one is.”

“Oh, that’s the spirit, would you like milk, sugar, one lump or two?”

“What with potatoes?” I did one of those cringy faces. “Nah, I’ll just take it straight, thanks.”

He handed me the cup and I took a sip. I had grit in my teeth. I pulled that same face again but cringyer. “You did wash the potatoes, right?”

“Oh no, you must be loopy! The mud is half the flavour in potato tea.”

I quickly turned the potato tea into tea tea while his back was turned. Luckily the hash browns were far better than the tea. So, once he’d finally wrestled his rooster back into his inside coat pocket, we hit the dusty trail.

Of course, because a feisty rooster is pretty hard to wrestle into your inside coat pocket, it was noon, so now we won’t be arriving at the farm til early on day four.

We travelled through the day and then made camp by the river.

So, we had potato soup and then snored, away with the faeries.

I woke up to that bloomin rooster crowing again, but happily at least, this time the farmer kept it in his inside coat pocket thus removing the need to wrestle it back in there. We left early. I was pretty desperate to avoid eating any potatoes for breakfast. He did offer me a small one as a snack a few times and he’d say, “Ooh this ere potato is a meris piper see, a much more crumbly flesh than for example, ya King Edward. They’re no good for mashing but roasting or chipping, they’re delicious.”

We finally made camp beneath the creaky fur trees. We would have got there sooner if it wasn’t for being attacked by a group of disgruntled sludging ground newts. I had to turn them into hedgehogs for 21 hours.

Dinner was the farmer’s speciality, mixed grill. I was pleased, could do with something other than potatoes, but guess what his version of a mixed grill consists of? That’s right, boiled potato, roast potato, mashed potato and chips.

I’m gonna need 71 winks after this one.

I was awokened just before dawn’s crack by the rooster, I’m getting kind of sick of this. I wandered off for a short while to find some foragings, I couldn’t stomach another potato.

The farm was a just a short walk. Short the walk may have been, but the farmer asked me no fewer than 17 times if I’d like a potato. Frankly mate, no I wouldn’t, and you need a hobby or something.

Finally, we arrived at the farm and the farmer showed me where to start my investigation. I sent him into the house to make some potato stew and well, just leave me alone.

The first thing I noticed was the potatoes that had gone missing were carefully removed from the plant, and I quickly identified a trail of potato peel. I followed it and at the end was a pile of peel and a pot. This is stranger than a silly snake swallowing a string of smoky sausages singing stupid songs.

This was where the culprits would be caught red-handed, all I have to do is shrink myself to a small size and play the waiting game.

Now I’m as tiny as a bug, I can stay out here for the night. Hopefully the pilferers will return.

I awaited all night without so much as 1 wink, I was sure the pilferers would show but they waited until just after dawn’s crack. I couldn’t believe my eyes when what I saw pilfering, peeling then boiling potatoes were, potatoes. To be exact enchanted cannibal potatoes. Now the only way to fix enchantings are by finding who did the enchanting and persuade them to do it no more. This will require a chat with the farmer.

“So, is there anyone that may be upset by something you did?”

“No, me wizaard. Oh wait, there was Clara, she was pretty upset with me, or Susan she seemed pretty disgruntled last time I saw her. Then Debbie, I mean she was fuming, or Theresa she was quite annoyed, or maybe Beth, we didn’t depart on good terms or perhaps…”

“Look, you’re on your own mate. It sounds like you’ve been upsetting a lot of women and they’ve probably got together to do the enchanting because, you’re obviously not a very nice person and your obsession with potatoes is at best unhealthy. You clearly deserve what’s coming to you. I’m out!”

And so, I hit the dusty trail, I’m not here for fixing self-caused dramas. Wizards have far more important things to do and Farmer Potato is a total tool. Humans, I’m really not a fan. Their always so humany.

I camped out under the stars in the wide-open clearing. I should make it home in the evening of the morrow.

I had some food that had nothing that was potato-based in it and hit the hay for 27 sleepy winks. I was beater than a beatnik’s badger-skinned bongo.

Well, another week is over, but this one was a waste of time really. Sometimes I get a bit sick of people abusing my help and my good nature. I help all the things in The Enchanted Woods, that’s what I do, but sometimes, people just take from you. It’s one of the downsides of being a nice wizard see. Helping folks at times, like a potent and powerful potion, will blow up in your face, leaving you with singed eyebrows. I’ll leave you with this advice dear friends: If someone goes out of their way for you, don’t be a Potato Farmer, be a Wizard!

Right, I’d better crack on with some of those cool stories I was telling you about *wink wink, nudge nudge*.

I hope the week for you is kind, loving, magical and mostly funny!