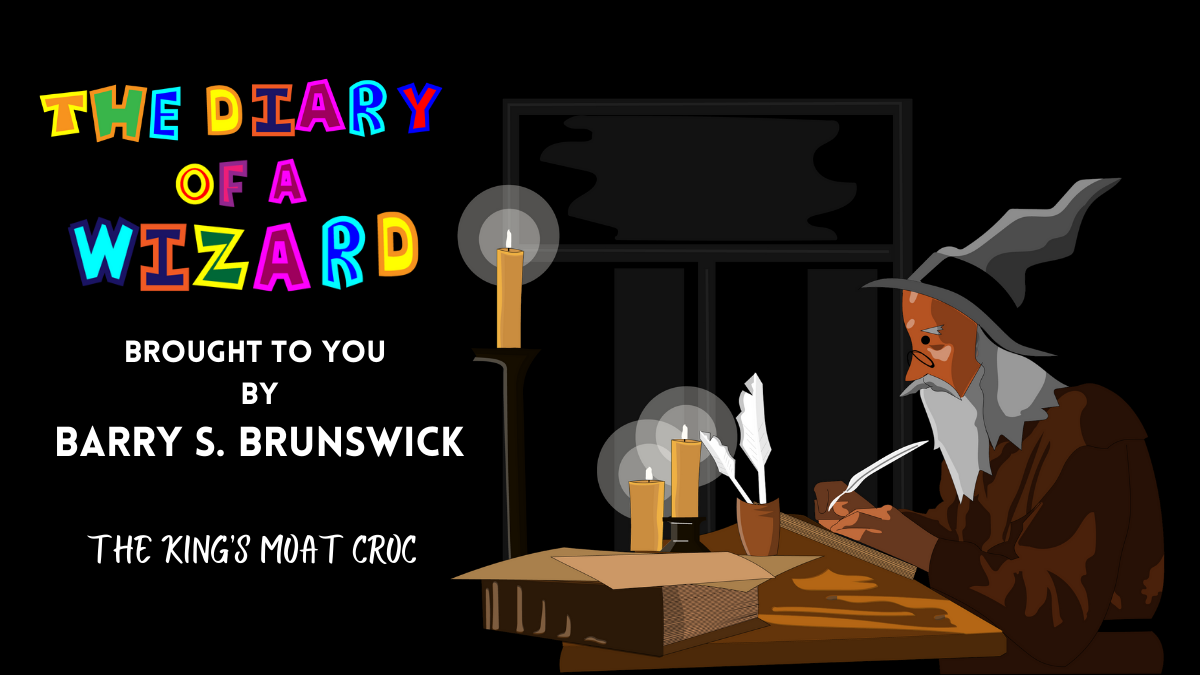 Hey friend! Welcome to The Diary of a Wizard, a magical blog for magical readers like you! This week I’ve gotta help Good King Theodore. He’s got a problem with his moat crocodile. I’d better see if I can help.

The King’s Moat Croc: Day One

Good King Theodore, sent a frantic rider to my door this morning, he was in a bit of a tizzy. He told me I must journey to The Golden Kingdom at once and with no delay as well. He headed off and allowed me to ready for the quest. I summoned my trusty magical steed Billy, the oversized talking cockney mountain goat and with my staff, bag of tricks and pointy hat, we headed off in the afternoon.

It’s a two-day quest to The Golden Kingdom, which sits atop of The Mountainous Range. We made good time and slept by the wispy grasses which happen to be in a meadow, unsurprisingly, it is called The Wispy Meadow.

The fae-folk helped us sleep by playing a teeny tiny lute and singing fae lullaby’s.

Woke up a little later than usual and I have to suspect that the lute was actually enchanted, as my silver coins had gone missing overnight. Those fae-folk can be pretty trixie. We headed off not so bright and breezy and nowhere near dawn’s crack.

We travelled through the woods until we reached the hill where we would camp for the night, by the beacon. We would have got there sooner if we weren’t attacked by 7 disgruntled wood imps. I turned them into 7 happy fruit faeries, but don’t worry they’ll turn back after we’re long gone.

It was a bit breezy on the hill but now I’m all snuggly, it’s time to catch 23 winks.

We set off bright and breezy this morning, it was breezy too, like breezy and freezy. This happens as you near The Mountainous Range where The Golden Kingdom lies, and the north wind rips down from the snow.

Mountains are pretty hard to climb so having a mountain goat as my trusty magical steed is pretty handy, and the fact he’s oversized, cockney and talking is just a bonus. He hopped up the mountain as nimble as a well, mountain goat and by late afternoon, we reached the castle walls of Good King Theodore.

He welcomed me in with open arms. He’s one of those back slapping blokes, you know the ones that love to either say something they consider funny, and slap you on the back as if to slap you into laughter, or if you say something that is actually funny, they slap you on the back as if to stop them selves from exploding, and back slapping is the only thing that works. I tell you this cos I’d already had the puff knocked out my lungs 7 times in 13 minutes.

As we feasted and made merry—this is all kings ever seem to do—Theodore told me of his woes. It turns out his moat crocodile, Harold has gone missing. There is no suggestion of foul play, but just like that, the other morning he was gone. Now the king’s kingdom is under threat of deadly invaders should they decide to maraud their way over. I’ve figured out a way to find him, but I’ll need the help of the birds.

We made merry long into the night while the birds roosted in their perches.

The birds awokened me and it hadn’t taken them long to locate Harold at all. I could have done without that magpie squawking at me with my fuzzy head and all, but there we go. I had no choice but to shrink myself to a small size and hitch a ride on a crow. It’s always quicker as the crow flies, see.

We swooped upon the cold breeze and over The Enchanted Woods and towards the warmer climes in the east. Finally, we reached the coast and sat far below on a deckchair on the sand, was a huge toothy crocodile. I figured I’d better unshrink myself from a tiny size if I was to talk to Harold at least that way he could hear me.

The trouble with talking to a crocodile is most crocodiles can’t actually talk so I had to do a speaky spell on him so we could chat.

“Yes, indeed it is I.” He had a bizarrely posh English accent, who’d have thunk? “How may I be of assistance to you on this fine day?”

“Yes, I am, pleasure to be of service to you.” He sipped his drink that had umbrellas in it.

“What are you doing here?” I asked. “The castle is at risk of deadly invaders marauding without you there to protect it.”

“Oh, yeah, I know, but I just needed a break. 30 years, 30 long years I’ve eaten deadly invaders for the king without a vacation or time off. I’ve haven’t even taken a sick day.”

“Well, I could, and he could just get some piranhas instead, but no, I don’t think I want to retire. I do like eating deadly invaders you see.”

“Okay, what is the ideal outcome for you, Harold?”

“Sure, I’m certain he’ll agree, and for those days Theodore can hire a caiman from the agency. It’d be way better than you just disappearing one night. The king sounded concerned indeed. It seems he’s pretty fond of you.”

And it was decided, I should negotiate with the king. Now to get back.

I shrunk myself and Harold down to a tiny size, and we rode back to The Golden Kingdom on 2 huge albatrosses.

We arrived late in the evening so negotiations would happen bright and breezy in the morrow right before I hit the dusty trail. I said, “See you in a while.” To Harold and now beddy byes is calling me, it’s been a long day.

The negotiations happened over the breakfast table and the king started to weep as he had been so thoughtless to his beloved pet, Harold. He promised he could have 25 days paid annual leave from now on and promised to treat his companion with the respect he had both earned and deserved. They ended up having many cuddles and tears. It was very moving.

I left them to their bonding and said, “See you later.” Which was a big mistake, crocodiles hate being mistaken for alligators see. I apologised and corrected myself.

Billy and I hit the dusty trail and started the long trek back home.

We slept by the lake that night and apart from the mozzies it was fine.

We headed off somewhere near dawn’s crack and arrived home by the late afternoon. Billy went on his way, and I made some stew and listened to some pixie jazz on the old gramophone.

Well, another interesting week has come to an end and another problem has been solved. Who’d have thought a king could love a croc so much. Unfortunately for Theodore it’s a folly pursuit. A croc is not like a dog or a cat, a croc will never love you, in fact given the opportunity they would almost certainly eat you. They’ll always, always, hate you and that is why they make very poor pets. I’ve also learned the scientific way to tell if it’s a croc or an alligator is to see whether it sees you in a while or later!

Well, I’m gonna write some cool stories for you now. I hope you week is full of wonder, adventure and magic, if not, I just hope it’s fun!