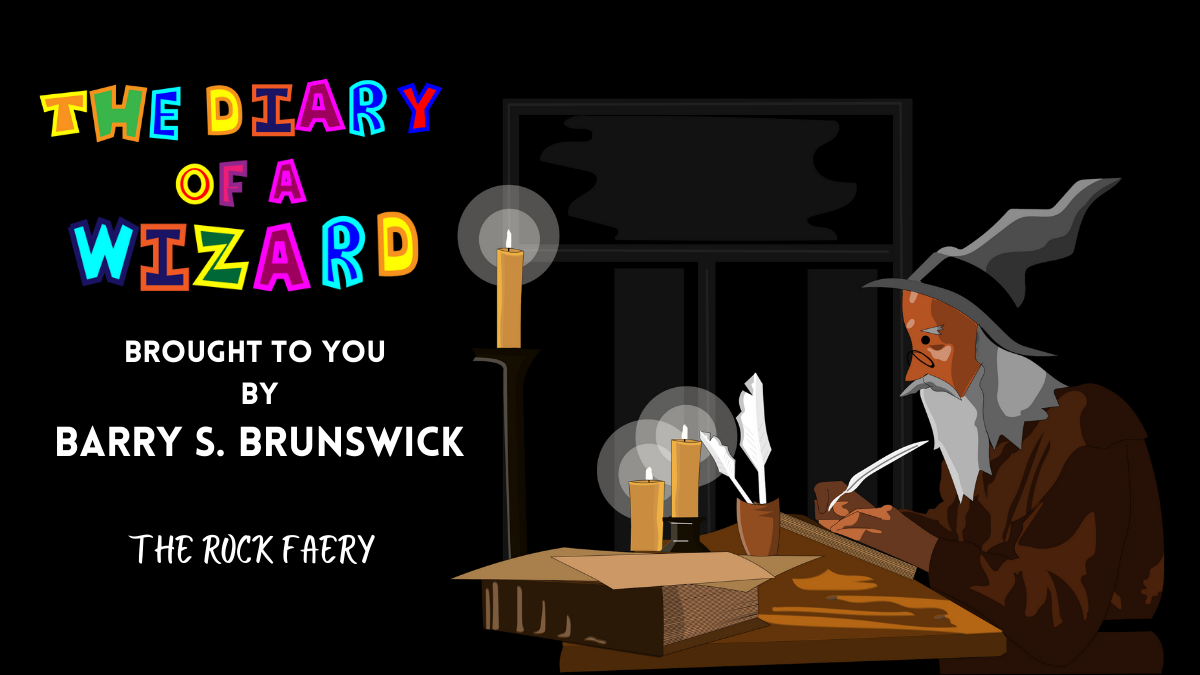 Hey friend! Welcome to The Diary of a Wizard, the craziest blog in the multiverse. This week I’m getting into some geology, of course, purely for magical purposes. I’m sure it’ll be a wondrous adventure cos well, it always is!

The Rock Faery: Day One

My trusty magical steed Billy, the oversized cockney mountain goat is vacaying this week so I’ll be travelling on my feet.

I spent the day prepping for the two-day journey out to the rocky part of the woods and will be leaving bright and breezy in the morrow.

I was ready to leave at dawn’s crack and then the cleaning faeries starting arguing about who get’s to do the washing up after breakfast (we met the cleaning faeries back in week 25 click here if you missed it). I had to scribble a rota just to stop them. The last thing I need is squeaky voices going at each other first thing in the morning. Anyway, peace was made, and I had my hat, my staff and my pointy boots, not to mention my bag of tricks, and headed out towards the rocky part of the woods.

I travelled all day and I’m gonna sleep by the heckling bush for the night.

My choice of sleeping place turned out to be a poor one, the bush kept hurling insults at me. It’s terrible for the self-esteem. I gladly left the foul-mouthed shrubbery behind and continued on my journey.

I should reach my destination before sundown with a bit of luck.

Finally, I did get to where I needed to go but I would have got there a lot quicker if I hadn’t been attacked by a gang of warthog-sized ferrets. I turned them into ferret-sized warthogs to teach them a lesson, but don’t worry, they’ll turn back after I’m long gone.

I reached the rocks as the sun set. I’ll catch 37 winks here and find what I came for in the morrow.

I awoke to a damp morning but that couldn’t break my spirits, I love magical geology! I walked out across the rocks with my magical rock hammer in hand. I don’t have to do anything see, apart from tell it which rocks to hammer. I need to find a rock that has the crystal inside and it’s more about luck than judgement.

Me and old hammer set to work, well at least hammer did, and it wasn’t but 17 minutes before I heard a voice:

I turned to see a faery poking out of the rocks. It moved and it had a shell like a tortoise, only this shell was made out rock. It was a rock faery.

“You pack that in now, or you’ll be for it! Look at you with your stupid beard and stupid hat. Get out of here you. We hate your rock-smashy kind round here!” it yelled.

“Well, that’s a bit obnoxious,” I responded. “And being a mighty wizard, I have a jolly good mind to turn you into a hedgehog!”

“A hedgehog you say? Can you really do that?” Its tone quietened and became much less aggressive, unsurprisingly.

“Yes, I can. I’m always turning things, into things that they once were not. It’s kinda my thing.”

I shook the little faery’s little hand. “What is the trouble, Perry? No need to yell, I’m standing right here.”

“Your breaking rocks!” He was sounding exasperated.

“Yeah, I was looking for crystals for magical rock cakes.”

“Well, being a wizard, I use resources from all over The Enchanted Woods, all the time, for all manners of reason. Responsibly of course.”

“You’re not being responsible now though, are you?” it questioned.

“If you take a plant, a new plant can grow. If you take an animal, a new one can be born, not so with rocks buckeroo. Billions of years of complex processes it takes them to become what they are today. You can’t just quickly grow another one, or start a rock farm, or pick one off the rock tree, can you?”

“The issue isn’t so much that you are using the rock,” Perry went on. “Sometimes, I understand wizards need crystals and such for their important work, but just so you can have a fancy cake? No thank you!”

“Yes, I understand. It does seem a little thoughtless now you say it like that. Look, I’ll make a deal with you. I’ll help protect the rocks using some wondrous wizardry and if I need crystals for my important work, I’ll come and ask you. Then I won’t have to break up rocks looking for crystals that don’t have crystals in. Deal?”

“Yeah perfect! as long as you promise never to use them for cakes.”

“So, you’re not gonna turn me into a hedgehog then?”

Obviously, I wouldn’t but it seemed my geology was over for the day, shame, I kinda like doing that. But my friends, The Enchanted Woods is about the things that inhabit it, and my duty is to them. I guess we’ll just have to party for a bit. I did bring my harmonica!

Wow the rock faery is quite the character I can tell you. It turns out it despises country rock, but digs funk, has a penchant for surrealism and writes lengthy obtuse letters to the editor, and book reviews.

I left pretty early cos I could tell Perry likes a bit of solitude. You see its mostly reclusive, but when it does come out to play, it’s a pretty wild customer, to which my fuzzy head can firmly attest.

I said the secret words, ones that are so secret, if I was to write them here, The Grand High Wizard himself will turn me into a naked mole rat, and I made my magic. Now if anyone tries to smash the rocks without Perry or another of its kind giving them permission, they’ll get terrible flatulence for a week. That should stop them, and of course, I confirmed the rock faeries don’t have a great sense of smell first being a thoughtful kinda chap.

I hit the dusty trail and made my weary way back towards home. I avoided the heckling bush altogether this time. I just didn’t have the strength.

I set off bright and breezy in the morning determined to get home at a reasonable hour.

I finally made it back before the sinking of the sun. It would have been a lot earlier if I wasn’t attacked by snaking swamp vines, I didn’t even have my sword, so I had to magic my way out of them. I kept a handful though cos they make a pretty good ingredient for rock cakes as it happens.

So, I baked and ate rock cakes that aren’t magical, and now to hit the hay and catch 59 winks.

It seems funny to me that I had never bumped into a rock faery before. I mean, there’s not many things I haven’t seen over the centuries. It just goes to show, that all things in The Enchanted Woods have their place and just because some may consider that rocks aren’t alive, doesn’t mean they don’t have a spirit. This simply has to be true, or the rocks could never have a faery to protect them in the first place.

The other thing I’ve learned, is no matter how old you get, or how long you live, it’s never too late to learn a moral lesson, even from one who is younger than you. With an open mind, an open heart, and most importantly, open ears we can all learn to be our best selves. Whether that be a magical self or a humany one.

I’m gonna write some cool stories for you now. May your week be overflowing with magical moments and giggles to spare.