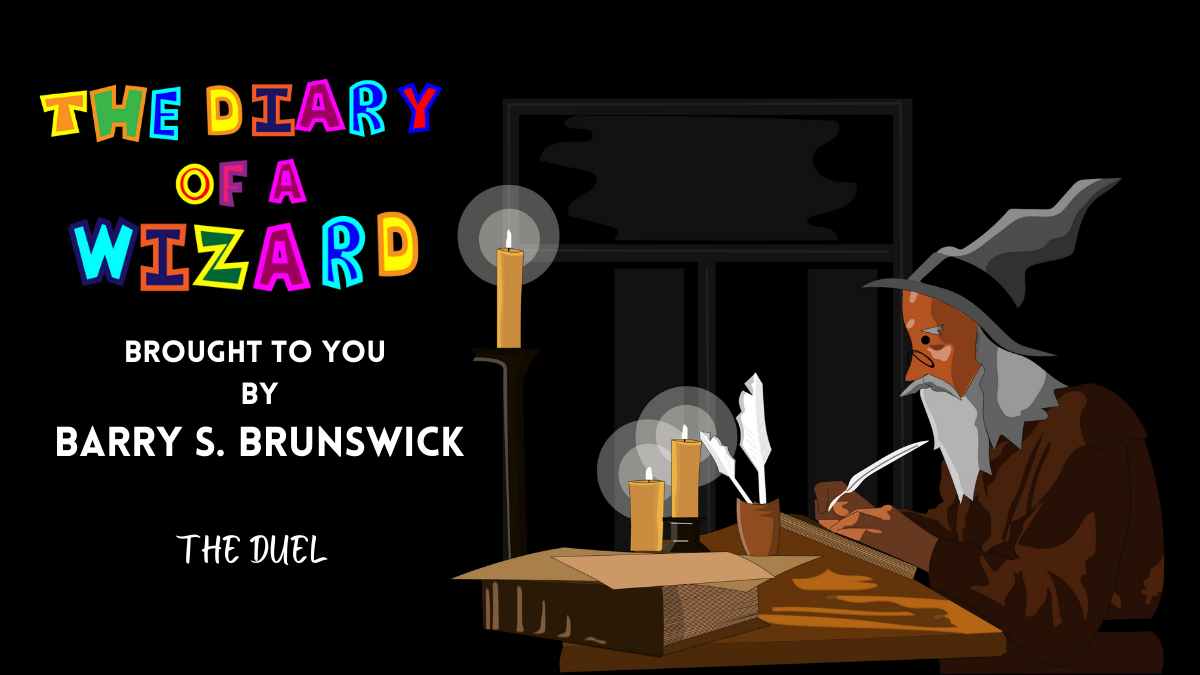 Hey friend! Welcome to The Diary of a Wizard, the most magically, monstrously, marvellous blog around, not to blow my own trumpet or anything! This week I’m getting into a scrape and maybe some fisty cuffs to deal with a scoundrel. Wish me luck!

The Duel: Day One

I awoke feeling pretty chilled, knowing I am without quests this week, and I won’t be welcoming any. I deserve some time off and it’s nice not having to defy death for a few days. I’m going to the market to stock up a bit, then it’s pure R & R and battery recharging. I mean, I love being a wizard, who wouldn’t? But it does come with its stresses and strains. You could say wizardry is a high-pressure industry, especially for one that lives in The Enchanted Woods, where there are many souls that need some magical help within.

The market’s happening in the morrow so I may have a little potter around today, perhaps a nice relaxing stroll.

I pottered then strolled but it wasn’t so relaxing, I got jumped by a gang of armed, dog-sized ground squirrels, they’re a bit like normal squirrels but they’re the size of dogs and live on the ground see. I saw them off by pelting them with acorns. If they didn’t hurt them, at least they got distracted by burying them for the winter so I could make a speedy get away. Bit weird when this part of the woods is never very cold and certainly never frozen, but I guess old habits die hard. And that destroyed my ambition of no death defying this week.

I’m gonna catch 41 winks and I will not let the squirrel incident pour water on my fireworks.

I awokened early and set off for market somewhere near dawn’s crack. I wandered the weary path through the trees and all the way to the market square where all manners of beings were busy buying and selling.

I took a basket in my hand and started to wander from stall to stall, merrily chatting and sprinkling a few coins here and there.

I got excited when I saw the wizard’s attire stall. I quite fancied buying a new pointy hat, but that was when I accidently stood on an elf’s toes. Not like your slavey Christmassy kind of elf, but like, a tall slender well dressed one, but boy did he make a scene.

“You sir, are a scallywag and a bounder!” His voice was super screechy. “I shall make you pay a hefty price for your clumsiness you scoundrel!”

“What is this, I mean, eyerolling rudeness? You sir, have frayed my final nerve. I should give you a bunch of fives and a knuckle sandwich too and a darn good thrashing!”

“Sure, sure. You know I’m a wizard though, right?”

“I don’t think you’re a wizard at all, I think you’re a liar and a fraud and I shall have my satisfaction.” He took off his glove and slapped me round the face with it. “You villainous rascal, I challenge you to a duel!”

“Alright then,” I said calmly.

“I shall meet you here in the market square on day four of this very week. We shall duel at dawn. As is the precedented norm, you choose the weapons, and I will bring a neutral referee.”

That elf has no idea what he’s getting himself in for, I guess he’ll have to find out the hard way.

I never brought the hat, I just trundled home, there’s always someone tryna ruin your fun, so much for R & R!

I caught some zees to make sure I was well rested for my training camp.

I woke up determined to do some training, just to make sure old elf boy gets his comeuppance. First, I did 39 push ups, followed by 72 sit ups, and then 107 star jumps—I didn’t think I could do so many, jumping up to the stars is pretty tricky.

In the afternoon I did some martial arts and shadow boxing. It was hard to fight my own shadow, but I just managed to win. Curiously, he seemed to know every move I was going to make.

I’m beat after the hard day I’ve had, but I couldn’t be more ready for the duel. After a day-long training camp, I’m in peak physical and mental condition.

I better catch 22 winks, cos I have to be up in and in the market square before dawn’s crack.

I reached the market square when it was still dark, and the elf hadn’t arrived yet. As the sun rose over the trees of The Enchanted Woods, finally, he arrived with the referee.

“Hey, Grand High Wizard.” I said. It turns out he was going to be the referee.

“You two know each other?” The elf asked, with a face etched with concern.

“I did tell you I was a wizard, and you didn’t believe me.” I shrugged.

The Grand High Wizard (GHW) piped up and put him in his place. “You asked me to be the referee, because you said I was the person with the most integrity in The Enchanted Woods.”

I tried not to laugh.

“I am in the market square at dawn, to referee a duel upon your request. The duel will go ahead.”

Honestly mate,” GHW said. “You should be more careful who you pick fights with.” He turned to me. “Which weapons have you selected?”

GHW dragged his foot and made a large circle in the middle of the market square which would be our ring. Each of us stood outside it and while the elf limbered up and took off his shirt ready, I cracked my knuckles and smirked.

“Are you ready?” GHW pointed to the elf. He nodded.

The elf screamed making his meanest war face, which wasn’t very mean at all, and his scream was kinda squeaky and unintimidating. Then he ran at me across the ring with his eyes wild.

In a puff of blue smoke, I turned him into a hedgehog using a secret incantation. With words so very secret if I was to write them here, The Grand High Wizard would revoke my wizarding license, and turn me into a belching swamp toad.

The hedgehog scuttled off and he won’t be turning back into an elf. I think this is a lesson learned for the elf, I mean hedgehog, and technically he should be grateful cos you know, in a duel you’re suppose to kill the other dude.

“Wanna grab some lunch and hang out?” GHW asked.

“Sure, but no magic poker”. (You can check out what happened back in week 39 the last time we played magic poker here if you missed it.)

We had a nice day and as the sun set, I grabbed some winks and GHW went on his way.

I used the day to fill up some of my potent and pungent potions that I’ve been neglecting for a while. I do like stewing up a potion even if it does whiff the pace up something terrible. I’ll have to leave my windows and doors open for a week, but now I’m fully stocked for death defying and treacherous quests.

I got an early night for once. It gives me enough time to maybe have 119 winks.

The day was lovely apart from when a faery hawk tried to eat my cleaning faery friends but I saw it off with a spray of faery hawk repellent, which I keep in my satchel for times such as these.

I hit the hay after a wonderful day.

Well, another week comes to an end and although I didn’t really get my R & R which is hardly a surprise, two very valuable lessons were learned. Firstly, the elf, he learned it’s a really bad idea to challenge a mighty and miraculous magic wizard to a duel, and me, I learned if you don’t want to get into a fight, it’s best to learn how to turn people into hedgehogs in a puff of smoke!

I’m off to write some cool stories for you now. I hope the week brings you sunshine, rainbows, giggles and most importantly magic.