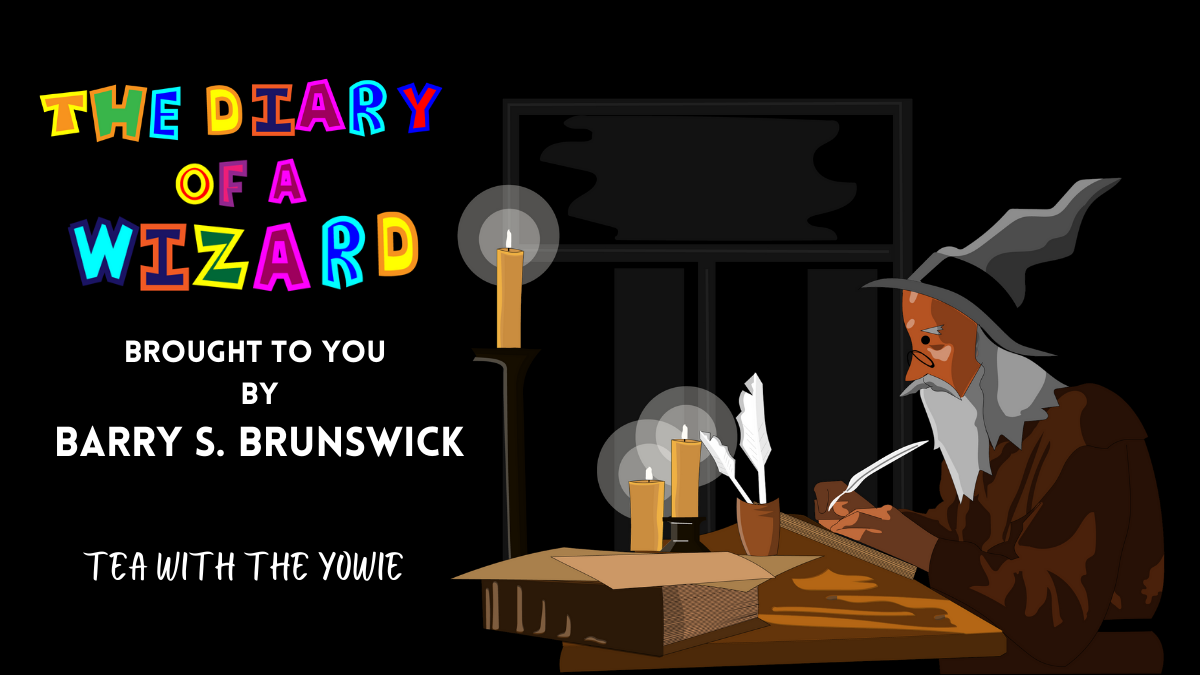 Hey friend! This week in the best blog full of weird wizadry, I’ve heard a rumour that a family of yowie have come to vacay in the woods. I’m gonna try and meet them. I can’t wait!

Tea with the Yowie: Day One

I’ve come deep into the shady part of the woods for this task. For those of you that don’t know, the yowie is the Australian cousin of sasquatch or bigfoot. Known to be slightly smaller and tend to be a little more aggressive.

I’m camping beneath a mighty oak tonight, but I can smell something in the air—something super stinky. This is usually the first sign that such cryptid creatures are close. Hopefully in the morrow I’ll have a better idea of where they are. They’re always hard to find because frankly, being found isn’t really their thing.

Tea with the Yowie: Day Two

As I’d hoped, I’m right on the edge of their territory tonight. It was a long trek, but I have found some nest like structures, some broken branches and dare I say, a footprint. I’ve baited the area with apples, they like them, and I did a slight spell to show them I’m friendly.

I did have a mishap with a mischievous brownie earlier, they do love to prank. It stuck a “Kick Me” sign on my back, and a lesser spotted mammoth stoat, actually did kick me! As it happens, I love a prank too, that’s why I turned the stoat into a brownie and the brownie into a stoat for a whole week. The irony is not lost on me!

Hopefully tomorrow the yowie will welcome me, so we can meet properly. That would be grand!

Tea with the Yowie: Day Three

Woke up this morning to rocks being hurled at me, and while to most this would seem like a bad start to the day, it was in fact, the yowie hurling said missiles. They do this to scare anyone away from them so they aren’t found as I said before, being found isn’t their thing. I knew if I could avoid getting a cracked skull they would eventually calm down.

I managed to survive the stoning with a little wacky and wondrous wizardry and some quick manoeuvring. I left a whole bag of apples on the tree stump and waited. A couple of hours later and the whole family came out. I was delighted. Anyway, I introduced myself and we took some tea and cake. They invited me to spend the night, of course, I accepted.

Tea with the Yowie: Day Four

I wish someone had warned me about the sleeping habits of yowie, cos that was super awkward. They all snuggle together in a nest, and I was no exception, they stank to high heaven and I got all hair in my mouth. It was hotter than grandmother’s Aga oven in there. Imagine being trapped within four smelly teddy bears all night unable to move. I was so happy when at dawn they awoke and Father took me on a forage.

It was nice to stretch the legs. Anyway, we got some acorns, some toads, some forest moss, some mushrooms, some pinecones, and a hedgehog. Guess what we’re having for dinner?

Even though I refused at first, they insisted I stay one more night with them. In the end I gave in for fear that they may well rip my arms out of the sockets if I do not. Another sweaty night but I should be good to leave early in the morrow.

Tea with the Yowie: Day Five

I have to say I hardly slept a wink last night. I ended in a huge yowie sandwich, it was hotter than dragon’s fire, and I swear it’ll take forever to get the smell of cryptid out of my beard. Needless to say, when they finally did arise, Father Yowie wanted to take me salmon fishing. I really wanted to be on my way but I think he likes me, and as he is more than capable of pulling off my head, I agreed to go.

What I didn’t bargain for, was having to stand knee deep at the bottom of a waterfall and catch the salmon with my bare hands. I missed so many in the end I magicked up a net and caught a few that way.

He asked me to join him for lunch but the sight of him devouring raw salmon, scales, guts and all, really turned my stomach. He was a little mad, and roared a bit, but I ran as fast as I could and promised him I’d write. I probably won’t. He only seems to like me when I’m doing whatever he wants me to, when he wants me to.

I’m about half the way back now and I think he’s finally stopped chasing me. Maybe I can sleep.

Tea with the Yowie: Day Six

He picked me up under his arm and started to carry me back. I had no choice but to turn him into a koala. Well, the yowie is Australian after all, so it seemed fitting.

Don’t worry he’ll turn back in few days, but he learned a valuable lesson—just cos you’re an 8ft tall hairy beast, doesn’t mean you can tangle with a wizard.

I should be home early in the morrow, would have been tonight, but no sign of my trusty magical steed Horace, I think he must be busy.

Tea with the Yowie: Day Seven

Made it home in good time, even got a chance to pick some gooby berries. I might make a pie with them, but not before I’ve written some cool stories for you. It was a strange week, but as you’ve probably noticed by now, all of my weeks are.

See you next week friend!

1 thought on “The Diary of a Wizard – Week Six”