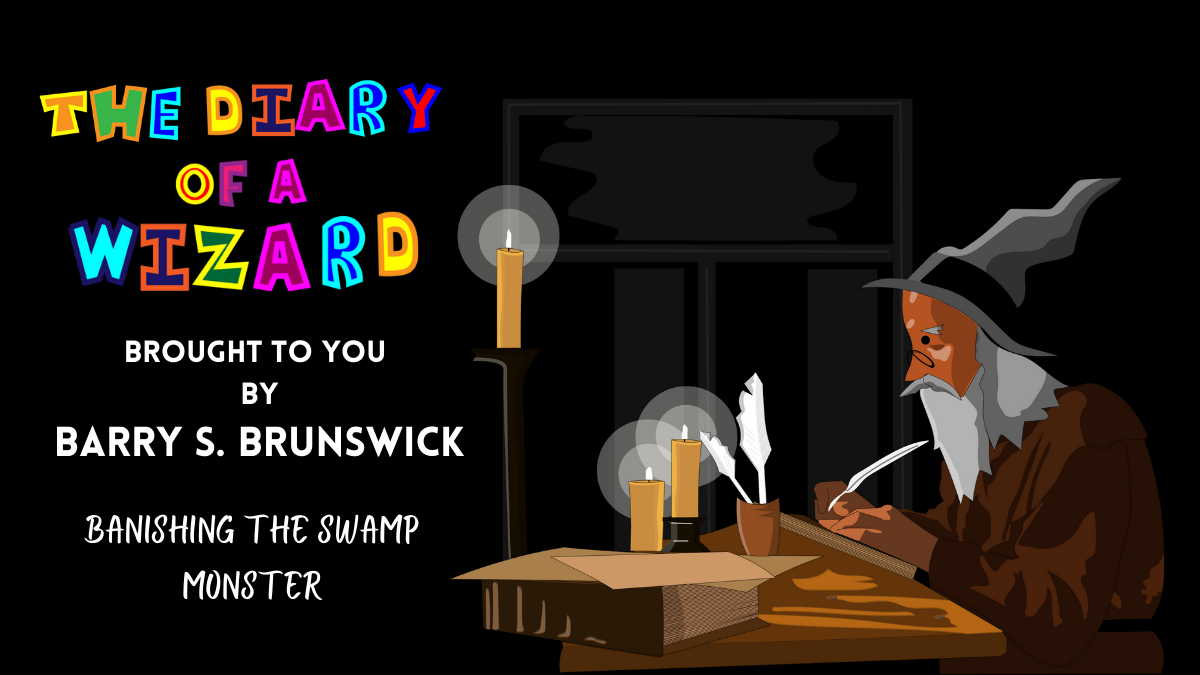 Hey friend! Welcome to the best blog about a wizard’s adventures. This week I’ve got to tangle with a fearsome swamp monster, that’s giving the swamp goblins a terrible time. I’d better don my wellington boots, and go and have a gander.

Banishing the Swamp Monster: Day One

A sweaty rider hammered frantically on my door this morning, well he was a swamp goblin anyway, and frankly, they’re always sweaty. I mean, they kick up a right whiff as well, so I knew it was a swamp goblin before I even opened the door. It’s the muddy oomska they live in see, and the amount of slimy swamp cabbage they eat, resulting in the breaking of wind never being too far away.

We greeted with the customary head butt, which honestly, I’m not a fan of, I prefer the human custom of shaking hands. I s’pose at least he didn’t want a cuddle. Gag!

Anyway, there has been a fearsome swamp monster, hanging near the swamp goblin’s village scaring the pants off the whole tribe. Their wind problem has become far more significant as a result.

Anyway, should make the swamp in the morrow.

Made the swamp goblin’s village before lunchtime. I took a sneaky swig of my whiff juice potion which stops me from smelling the repugnant odours that couldn’t wait to invade my nostrils. A nose peg seemed a little rude.

I was greeted as sometimes happens, as a hero, although I am merely a wizard. You see, I wear robes, heroes wear capes and their underpants on the outside of their trousers. I have to admit 157 head butts from each villager has given me a headache and slightly blurry vision.

After a brief chat with the Chief Haggle Berry the Third about the swamp monster, you may remember him from week 5 when I had to negotiate a peace deal, the moment I had been dreading, the banquet.

Tadpoles, gravel, pinecones, acorns and a lot of slimy swamp cabbage later and I was groaning like a grumpy grisly grouch goose, and really in need of my bed but I guess this patch of swamp moss will have to do.

Unsurprisingly I skipped breakfast after spending half the night up and down throwing up. I tell ya, it tastes worse on the way out than the way in, and that’s saying something. I may have to cook for 157 hungry goblins to just get myself something palatable tonight.

I searched around for a while and found a few sure signs of monstrous activity. Snapped branches, a lingering stench, even a clear webbed footprint, well that was either the swamp monster or there’s some horse-sized ducks around here somewhere.

It’s clear this monster’s big and most likely mean. I’ll come out in the eve of the morrow for the swamp monster does most of its activity of a night-time.

Why not tonight? You may ask, but I gotta cook 157 swamp goblins dinner remember!

Dinner was a roaring success, wild 7-horned swamp boar, newt roe and cous cous, with a green salad; okay, it was slimy swamp cabbage, but you know I’m limited around here; and most importantly, the secret ingredient. I’m not sure if I should tell you or not. What’s that, you want me to? Okay, as long as you promise not to tell anyone, the secret ingredient is, love.

Now this evening I have to tangle with a swamp monster. It’s gonna be super gross. I hate the swamp and swamp monsters suck.

I didn’t find the monster, but I did set some traps, of course with a cunning bit of wonderous wizardry added. I’ll go and sleep now and see if I catch anything by the early morrow.

Went to check my traps after eating seven beetles, it’s way better than slimy swamp cabbage and I have to say, it doesn’t take long for your standards to drop in these surroundings. I can’t wait to have a bath, with bubbles, cos bubbles are magical!

Anyway, the swamp monster was trapped in a stand still or you get tickled trap, these are one of the most effective in a wizard’s arsenal. You see it does exactly what it says on the tin, stand still or it magically tickles you.

Before I released it, I made a communication spell, and we had a chat. Turns out old Reggie, that’s his name, was just lost, and he was only growling cos he’s hungry and cranky. He was just trying to get some food from the village but every time he saw some villagers, the windy pops were so bad he was nearly over come and had to swim quickly off.

We agreed we’d get some dinner at the village, and I’d guide him back in the morrow. If I tell the goblins about him and he won’t hurt them, hopefully the, shall we say “physical reaction” shouldn’t be so bad.

I had to give Reggie some of the whiff juice because the “physical reaction” wasn’t great. I guess a butthole just can’t understand reason, let alone 157 all egging each other on, pun intended!

Anyway, I couldn’t wait to get out of there, but the poor pony had to go back alone. She can’t come through the swamp. I’ll use some wizardry to get me back. She’ll be fine, it was an easy journey there.

Anyway, no wonder Reggie was mad, he has a lovely swamp wife Esmerelda, and two beautiful swamp daughters, okay they are “lovely” and “beautiful” for swamp monsters, which are butt ugly by nature, but you know what I mean. It was so nice to see them reunited.

The goblins are happy, Reggie is reunited with his gross-looking family, so now I’ll shrink myself to a small size and catch a dragonfly out of here. May have to catch 29 winks on the wing and be home by dawns crack.

Well, I made it back with no dramas and first thing I did was burn my robe and my boots and have that bath, with bubbles, that we all know are magical. I ate some normal food, just fresh fruit and now I’m gonna write cool stories for you.

Once again, despite its trials I could say it’s been a successful week.

1 thought on “The Diary of a Wizard – Week Sixteen”