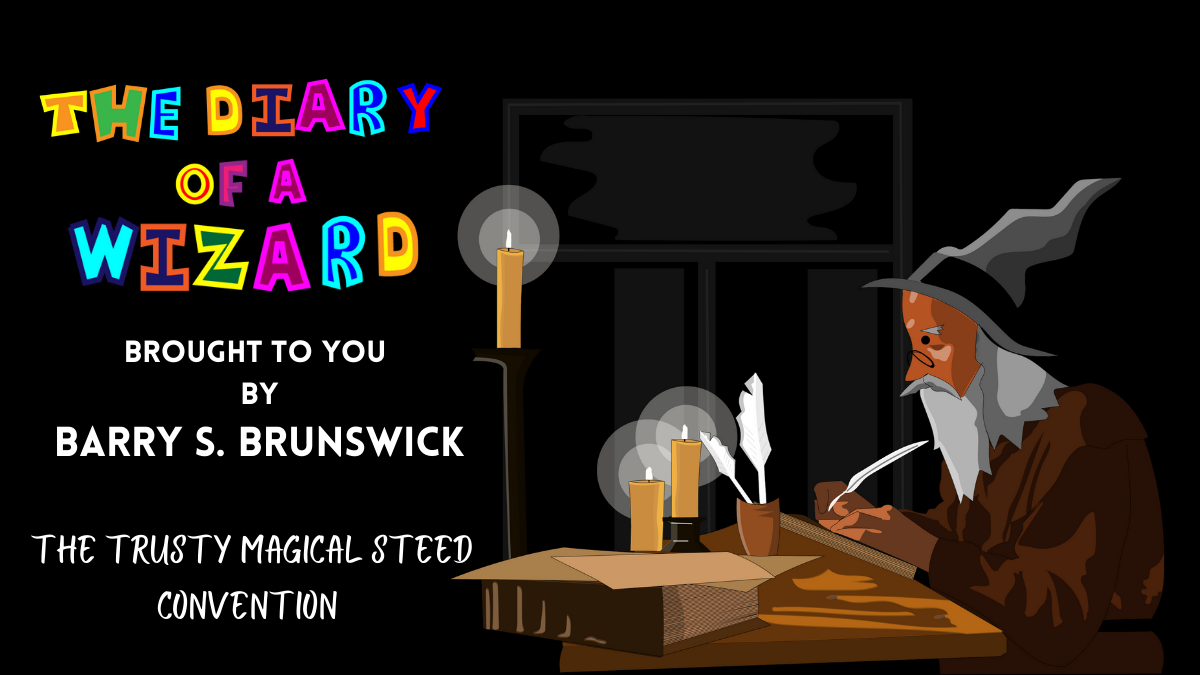 Hey friend! Welcome to the best blog for trusty magical steedary. This week I’m heading over to The Trusty Magical Steed Convention. It happens once a year and it’s always pretty cool so I can’t wait!

I woke up this morning and started to make ready for The Trusty Magical Steed Convention. The Woodland Convention Centre is right next to The Woodland Stadium where the Woodland Games were held back in week 20, (check it out here if you missed it).

Hopefully, for once this will be a week of leisure as opposed to death-defying quests, but admittedly things will probably get strange, being The Diary of a Wizard and all that.

The conference is a 3-day event and I’ll be heading off bright and breezy in the morrow. I summoned my trusty magical steed Billy, the oversized talking cockney mountain goat (obvs I have to take my steed to a steed convention), so we could be ready to make the off at dawn’s crack.

We hit the dusty trail early just as I’d hoped. It’ll take us til late to get there and then I have to check into the hotel and Billy into the stable.

We rode through the morning, into the afternoon when we were attacked by a three-horned sludge hippo, they’re just like a hippo but with three horns that live in sludge. It took some doing but I turned it into a 3-horned mud newt, but don’t worry it’ll turn back after we’re long gone.

Billy got to check out the stables I went down for dinner. It was a bit of a free for all with all the folks in for the convention. In the end I got room service to solve the headaches. I’m gonna catch 72 winks now and take a cheeky trip to dreamland. (Oh! The name of my trilogy!!)

I awoke well rested and ready for a big day at the convention. I took breakfast downstairs and then headed to the stables to get Billy, and then on to the convention centre. The lights shone bright, and the sounds and smells filled the room. Everywhere were steeds, some magical, and some just incredible but all, awesome.

There were huge sled dogs pulling a hovering sled around the track, and they went so fast they were a blur. Then there was an enormous and monstrous dragon with a whippy tail and breath of fire. And silver horses with flowing manes jumping effortlessly over obstacles. There was even some dude riding a sentient unicycle.

Then we took some lunch. There was a huge banquet hall with food from all over The Enchanted Woods, and a wondrous array it was too. There was one enormous table for us, the riders, and one for the trusty magical steeds. For the most part that works out but like the spotted lizard man that rides piggyback on a human they kinda swap round who eats where.

I cannot emphasise enough why food is important here. Think if the old dragon over there gets a rumbling belly and he fancies eating Billy, there’ll be mayhem, so they have to always have full bellies.

The afternoon we checked out some Rabbit-riding pixies, dragon fly faeries, a four-horned polar bear with a cave man riding it, and a Tough Butt, riding a hedgehog. A Tough Butt is a type of tiny elf that gets a tough butt from riding a spikey hedgehog all the time. They come together from birth and form a bond that lasts an entire lifetime. Cute!

I went to grab dinner after a full day of activity and I know we’ve just scratched the surface. Billy returned to the stable, me, my hotel room, and many winks will be had.

I woke up all excited as to what today would bring and of course munched a huge breakfast. I’m packing on the pounds this week, but I’m just so spoiled for choice. I met up with Billy and we headed to the other side of the convention centre.

The talking frog that ride’s a singing croc was super cool. Her operatic tones were incredible even if her breath was not. Then there was the fish that rides a bigger fish. The eagle knight was swooping over head on his, well, eagle unsurprisingly.

I got a bit parched and needed to wet the old whistle, so Billy and I headed to the bar area. I grabbed a drink for us both and as we went to sit down, I saw a dishevelled looking unicorn sitting in the corner.

“How are you doing old boy?” I asked.

That was when Billy interrupted. “Erm, oo’s this then?” He’s a cockney remember, so he struggles with the letter “H”.

“Oh, sorry Billy, this is Horace and Horace, Billy.”

“And ‘ow do you know each other?” he asked suspiciously.

“Yeah of course. We weren’t married or anything. You always knew you weren’t the first.”

“Yeah that’s true,” he sniffled. “But you never said he was a unicorn. I’ll leave you two to catch up then. I’m gonna check out the flying horse parade. See you around ‘orace.”

Man, that was awkward. (You can read about our break up from back in week 17, check it out here if you missed it).

I have to admit Horace and I caught up, but I was a little worried about him. He didn’t really look or sound himself.

We talked for an hour or so, and it left me feeling rather guilty. Even if he wasn’t my steed anymore, I could have stayed in touch with him. I promised that I would from now on, and then I went to try and smooth things over with Billy. I think he’s got a case of the green-eyed monster. It’s kind of understandable, Horace, even not looking his finest, is a magnificent beast indeed.

I couldn’t find Billy, he must have gone back to the stable, so I guess I’ll do metaphorically what he is doing literally, and hit the hay.

I did meet up with Billy this morning and even though it was the final day, he wasn’t excited or talkative. I think he’s being a little moody crabby pants and being unreasonable at that. It is not my fault I bumped into Horace, and we’ve been friends for 250 years or more. So sorry on this one Billy, you’ll just have to suck it up.

Honestly by the time lunch came around I’d lost my enthusiasm and so we headed back for the last night in the hotel, or stable in his case.

I awoke bright and breezy and was ready to hit the road by dawn’s crack. We plodded in silence and honestly, I couldn’t wait to get home. I’ve never seen this side of Billy before.

I’m sure he’ll be fine but he’s a little precious.

We made it back as the sun went down and I let Billy crash at mine and made him some food. I didn’t really want to, but if I’d made him go, his mood would probably be worse. I told him how much his steedary means to me and Horace is yes, my friend, but my steed no longer. I think he finally took it in before I hit the sack.

And so, another week comes to an end. This week I’ve learned the relationship between rider and steed is a varied and magical one and can certainly get complicated. We share adventures and moments and build a bond that can never be broken even after our paths go in separate directions.

Horace probably needs a friend, and I don’t really care how Billy feels about it on this one, because although he is my trusty magical steed, Horace will always be my friend. There is room in one wizard’s life for the both of them.

Anyway, I’m gonna write some cool stories for you now. I hope your week is filled with lollipops, bubbles, ice cream, water fights and belly chuckles.

1 thought on “The Diary of a Wizard – Week Forty”