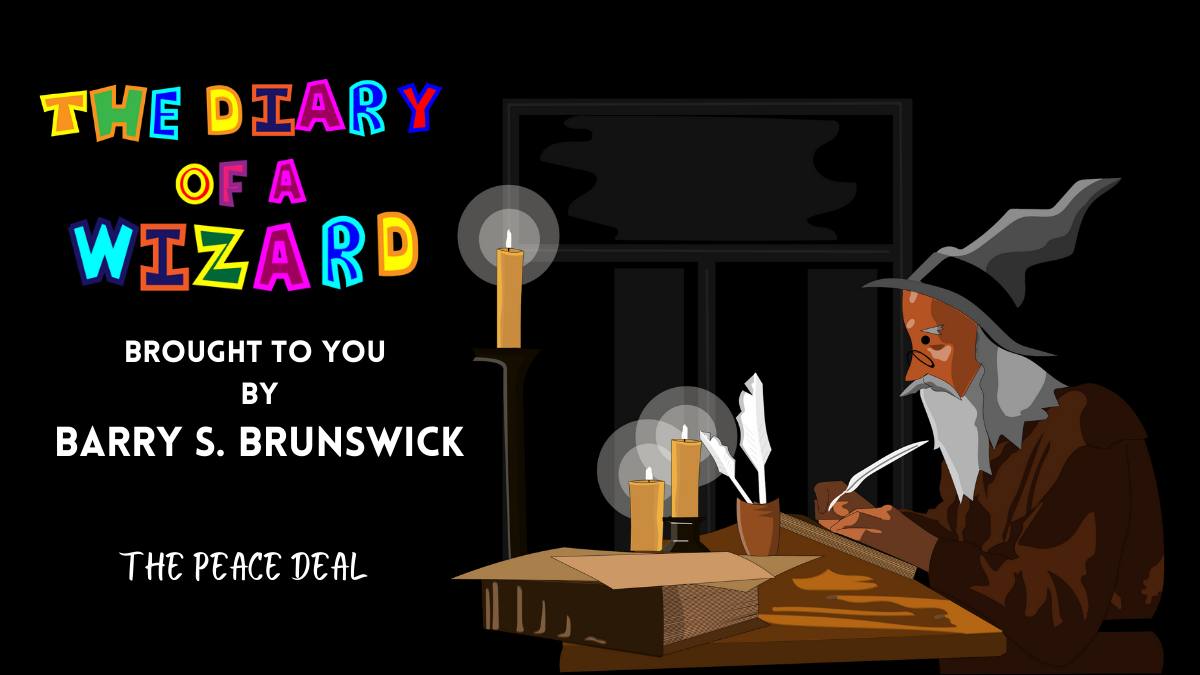 Hey friend! This week on the best blog for all things wizardy, I’ve got to negotiate a tricky peace deal between some ill-tempered Cave Trolls and some disgruntled Swamp Goblins. There’s been bloodshed for 103 years. I’ll need to be on top form for this one, it’s going to be tough.

The Peace Deal: Day One

Left early for the cave troll’s village and the stench hit me from a mile away. We can’t meet the goblins here, it has to be neutral ground for the deal to stand any chance at all.

I met with the troll chief, Chief Bozo Melonhead. He’s called this due to the size of his head, unsurprisingly. I told him in the morrow, I shall meet the goblins and arrange the meeting, but to give me a head start I asked if he could tell me why they have been at war for 103 years. His response was not useful. That is hardly a surprise due to the tiny acorn-sized brain that trolls have.

Well, thanks for the info mate. I hope my trip to the goblins is far more productive.

Got to the goblin’s village early to get going on the job at hand. The smell hit me from two miles away. We arranged a meeting of the two tribe’s chiefs under the old oak tree in the morrow. We’ll have a feast and then negotiate. I must admit I’m losing hope, as when I asked Haggle Berry the Third, if he knew why they’d been fighting for 103 years.

He said: “Oh we don’t likes those meanies, we don’ts.”

Cheers for the info pal. That is hardly a surprise due to the tiny pea-sized brain that goblins have.

Now I’ve gotta work out what we’re gonna eat, how can we reach a compromise, and finally, why they have been fighting for 103 years.

Wish me luck cos I think I’m gonna need it.

Did a sneaky mind connection with my best mate and 500-year-old cave witch, Caladium Crane this morning. I needed her to look into her misty crystal ball for a sneaky bit of hindsight. If I want hindsight I have to do it the old fashioned way and time travel, and that is very draining. I need to know exactly why they are fighting.

It turns out the goblins were playing football one morning and they accidentally kicked the ball into the troll’s village. The trolls refused to give it back, and that was it. Warring for 103 years. I shook my head so hard it nearly fell off!

For the crucial dinner, I have decided to cook a mixture of delicacies to make sure someone likes something, and just hope I don’t throw up while they eat. They are both super gross.

Finally, we met at the old oak tree, and with the customary greeting of a headbutt, the meeting began. Yeah, if you’re wondering, I was borderline throwing up when they ate the belching swamp toad. Anyway, it descended into a food fight with slimy swamp cabbage and gravel flying everywhere. We won’t be leaving this table ’til we talk and sort out this deal. I’m 100% dedicated to this cause. Enough bruises and fat lips and bloodshed has been delivered in these 103 years.

Today went well. I mean as well as it can when two idiots that don’t know why they are fighting, continue fighting. Haggle Berry hit Bozo Melonhead, in the melon head with his club. Bozo returned fire with a cheap nut shot to his acorns. Full out war ensued, dead legs, fat lips, bloody noses, but thankfully, by the hedgehog splat course, tempers had cooled.

Despite my best intentions and highest hopes for today, the talks did not move forward at a rapid pace. These two muppets can’t stop arguing. Like, about anything. “What the weather’s like” or, “What colour the tree is. “ Or “Which one of them the wizard likes most,” which is neither I can tell you. They smell, they have bad table manners, and they are grumpy, short-sighted, pea-brained nincompoops.

I don’t know who said it, “Arguing with an idiot is like playing chess with a pigeon, no matter how good you are, they’ll still knock all the pieces over, poop on the board and strut round like they won.” Never been truer words said. I just wanna go home and write cool stories for you now, I’m done.

Now I’ve realised all the talk of “bloodshed” was just slightly over exaggerated. They may have been “At war” and I use the term very lightly, but the worst injury sustained in 103 years was little more than a sprained ankle. And that was because a careless troll tripped over a tree root.

It occurs to me that these creatures like fighting, I mean their greeting is a head butt after all, but they only do it for a laugh. I have completely and utterly failed to negotiate a peace deal, but I did get inside the pea-sized brain of an ill-tempered swamp goblin and the acorn-sized brain of a disgruntled cave troll. In the end however, I reached the conclusion, there’s nothing whatsoever, to see here!

See you then friend!

2 thoughts on “The Diary of a Wizard – Week Five”