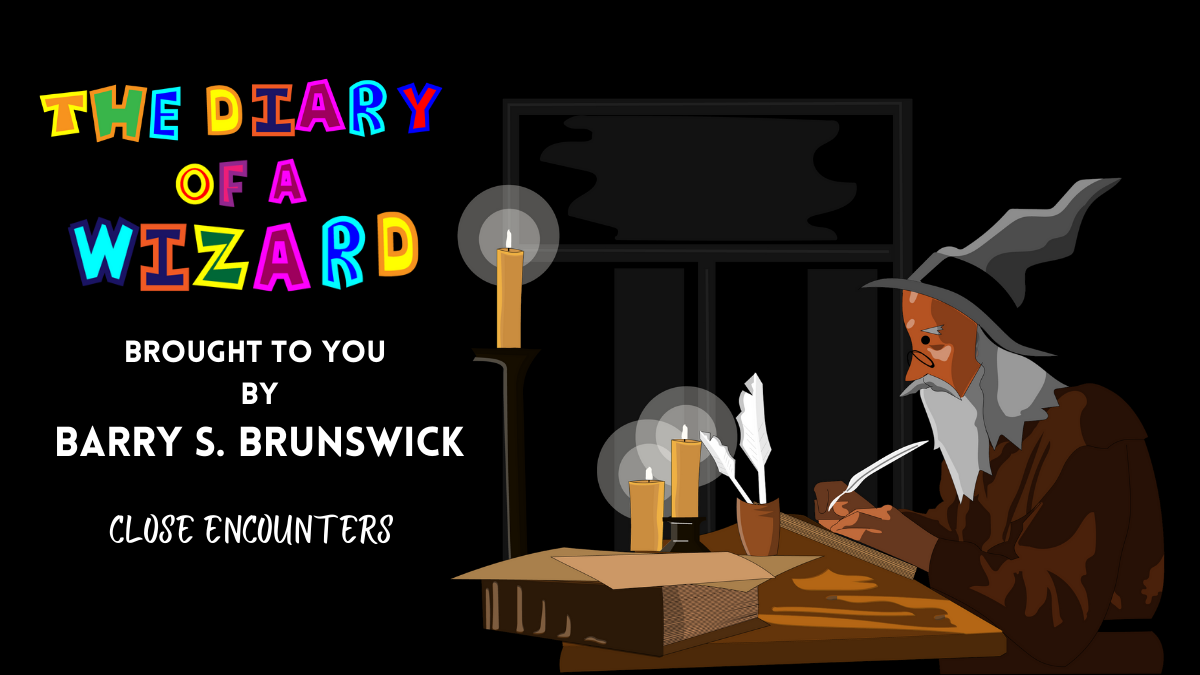 Hey friend! Welcome to the best blog in a world of whacky and wondrous wizardry! You may have noticed I haven’t published a new diary entry for 9 weeks—I mean, you probably didn’t notice, but you know what I’m saying. There is of course a very good reason for this, allow me to explain.

Myself and the Grand High Wizard who’s a bit of a you know what, as we have experienced in the past, were playing dares. He dared me to go through a porthole. Of course, not wanting appear like a cowardy custard that’s shakily scared, I did just that. I went through and ended up in a pile of cheesy ogre socks in another dimension. I was there just long enough to spew up everything I’d eaten for a week. It was only a total of five and 3/8 minutes I was there, but in this world, 9 whole weeks had gone by!!

Now I’m back in our realm, some strange happenings have been well, happening—befuddling and bizarre happenings at that.

I spent the day disinfecting everything I have, and my entire body to get the pungent pong of ogre’s socks off me. Finally, after 13 hours, I smelled like me again. Honestly that was the worst 5 and 3/8 minutes or 9 weeks—whichever way you look at it—of my entire life.

As darkness fell across The Enchanted Woods, I stepped out to hear the operatic crickets sing their nightly well, operas. That was when I saw a strange light in the sky. I felt the air a-buzz with electricity. The light grew brighter and nearer and lit up the woods. I was stunned, silently standing stiff like a shivering snake gone solid in a snowstorm. And then, as if I slipped into nothing, everything went dark.

I awoke in a strange craft with what looked like aliens standing over me. They had massive heads, skinny bodies, and almond-shaped black eyes. Most of you would know them as Greys of which there are many types. They are in fact not an entity such as you or I, but a type of biological AI that does all the donkey work for the Mantises, but everyone knows that.

They spoke to me directly into my mind and told me that they have been studying humans and they think, for the most part, they totally suck, so they wanna check out some of the magical beings in the woods instead. They want me to be their guide.

Of course, I agreed, but only once they reassured me that they weren’t getting the probe I’ve heard about involved.

The adventure shall begin bright and breezy in the morrow. And the morrow may start in 3 seconds cos yeah, I’m getting used to this whole time-loss event thing.

3 seconds passed and it was indeed tomorrow. Now we have to beam down to The Enchanted Woods.

“Beam me down Scotty” they said.

I thought this was a reference to Star Trek, but that is in fact the manufacturers universal command for the teleporter thingy. Who knew! (I know he never really said that Trekkies, before you come at me, ha ha!)

We rematerialized safely in the woods, where I wondered where I should take them first. So just as I would for any guest of mine, I took them to my place for a nice cup of tea and a chit chat.

They told me there was only one thing they had to do, which was see The Grand High Wizard. They want to know the source of his power.

It ended up going rather late into the night, who would have thought an alien construct from another planet, would like turnip ale so much? Needless to say, they ended up staying the night cos they felt a little squiggly squiffy.

In a flash we were there. I think I could do with a UFO and a teleporter, it’s far better than a 3-day trek through cave troll country. I wonder if I can get one on eBay.

“I knew you’d be here,” she said, as she poked her head out of the cave. “Foreseen it in the bones I have, I did!”

I pointed out I sent a mystical mind message before we left but you know, if the bones told her, cool. She gave us all a slug of stinky hangover cure, then we went for a wander.

The Greys were interested in the pixies, fascinated by the unicorns, and their minds were blown by the various fae folk they encountered. They nearly got caught in a Trixie Pixie trap, but I rescued them with a bit of wonderous wizardry. It taught them the valuable lesson, that sometimes you need wizardry not technology to get you out of a sticky situation in The Enchanted Woods.

Caladium cooked a gross dinner for us all and we spent the night there. Me and Caladium told many yarns of our adventures together and the aliens downloaded star charts into our subconscious minds and stuff. It was a blast!

I asked the Greys where else they would like to go today, and they were itching to know how a yowie takes his tea. That’ll keep us busy for the day, and then tomorrow, before they go, they’d like to visit the Grand High Wizard. They do seem fascinated with where he gets his magic from.

We went to see the yowie family for that cup of tea (you may remember them from week 6 check it out here if you missed it). It turns, out they prefer two lumps of sugar and some biscuits on the side. And preferably in a floral teacup with a saucer and the matching plate, with the biscuits on it, sitting atop a lacy doily.

We got out of there before they invited us to stay the night, you can only put up with yowie pong for a certain length of time before it gets the better of you. Also, if you stay for dinner, they eat badger roadkill and other gross things. They have very low standards for what is essentially a very intelligent and sophisticated being.

Everything is happening in weird time this week cos you know, I keep teleporting everywhere and multiple time-loss events, so I’ll try and get 1.7 second’s sleep.

Went to see the Grand High Wizard with the Greys and immediately, in a flash, they beamed him onboard and left me at his place alone. They kept saying they needed to find the source of his magic again and again.

When he’d beamed back, he’d only been gone a few hours, but he sure was struggling to walk. I don’t think they found any magic there!

Anyway, they beamed me home without trying to find the source of my magic thankfully. They telepathically told me, I use my magic for good, he uses his for personal gain, so my magic doesn’t need to be investigated. Hooray!

Well, I happily watched the clock tick, second after second, in regular seconds, like ones that are always the same, and you can count and stuff, it was awesome! I’m gonna spend the rest of the day writing cool stories for you. It’s been a crazy 10 weeks!

See ya next week (hopefully) friend!