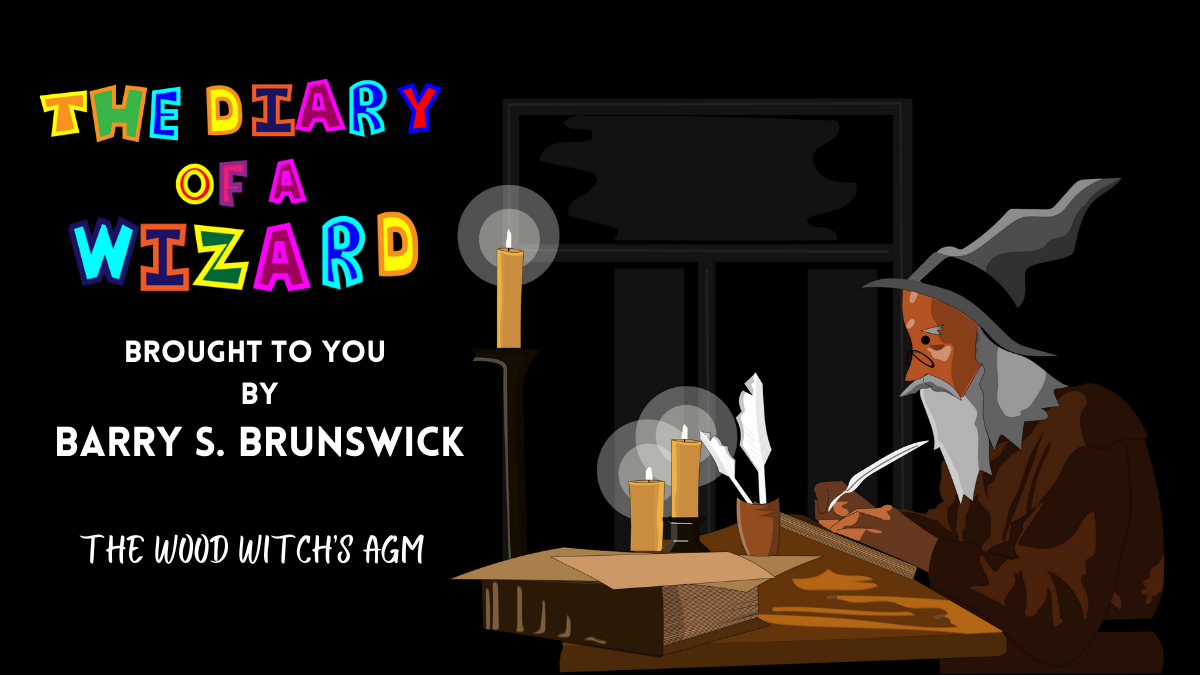 Hey friend! Welcome to the best blog for crazy occurrences on a weekly basis. This week I have been invited to do a speech at the wood witch’s Annual General Meeting (AGM). I’ve never done a speech to wood witches before. Cave witches, sure, wicked witches, yep, white witches, all the time, even spoke to The Mighty Elf Witch on the phone once, just never ever wood ones. This should be interesting.

The Wood Witch’s AGM: Day One

A squirrel hopped through my window bright and breezy this morning and delivered me a neatly packaged letter. The wood witches want me to speak at their AGM. Well, this is quite the honour, I’m exciteder that an electric eel’s eccentric uncle Edward at an easter egg extravaganza.

What will I say?

I have to deliver the speech on Day 4 of this week, so I better get scribbling. I’ve been instructed to go to the sunny side of the woods to meet the wood witch in charge of wood witches and wood witchery. I suppose a similar rank to the The Grand High Wizard but hopefully she’s not as annoying or as much of a clown.

The sunny side is a two-day ride (oooh, a rhyme!), so I’ll leave around dawn’s crack in the morrow.

I hope I get my speech down by then. Pressure!! (Cue: David Bowie and Queen)

I summoned my trusty magical steed Billy, the oversized talking cockney mountain goat and he arrived promptly as he was only in the next field meeting someone. When pushed on who the someone was, Billy changed the subject.

We made haste and set off at once.

We camped between the snowy and rainy parts which is technically the sleety part, where the humicorns roam. They’re unicorns but with a human upper body and head, still with the horn though or they’d be centaurs. They love to frolic and dance.

We watched them as we fell asleep. It was most tranquil, after we drank some warmy potion. It makes you warm in case you were wondering.

Woke up wet and cold cos the warmy potion had warn off. The good thing about leaving the sleety part and stepping into the rainy part of the woods, is it’s a bit warmer. We got attacked on the way out by a half-melted enchanted snowman. He wanted to steal my wallet, but I changed him into a blueberry slurpy and went on my way. Don’t worry though, he’ll turn back into a half-melted enchanted snowman when we’re long gone.

Finally, by mid-afternoon, we were there.

It was a small, crooked cottage and it did look pretty. I left Billy and went up to the door and knocked. The wood witch answered, and I introduced myself and asked her name.

“Karina the Hun,” she said.

“Marvellous to meet you. Is there somewhere my trusty magical steed Billy, the oversized talking cockney mountain goat can rest?”

“Hell if I know,” she declared. “I just sit on my porch and putter around the yard like an old lady.”

“You don’t look very old. Do you play the banjo?”

“Oh, to ward off evil spirits?”

“No, to attract them, so I can womp them with my broom!”

“What in the rocking chair?”

“No, I like the porch swing, but never mind that because I like to do my spirit womping in the back yard.”

“Out the back, so no one knows you’re a witch?”

“Don’t be silly, I smear peanut butter on the trees in the front yard to make sure they know I’m a witch—a squirrel-aligned one—and to keep away the mischievous goblin girl scouts with their dead fly cookies. I do my spirit womping in the backyard because it’s got better spirit-womping feng shui.”

Though the conversation was fascinating, there was business at hand. I tried to find out what was happening with the AGM.

“Are we doing the meeting in a hall or something?”

“Yes, wood witches have zoom meetings on day 2 of the week anyway. I never go because they’re all cliquey and stupid, but nevertheless they happen.”

“Not mystic mind messages? That’s what we wondrous and wacky wizard’s use.”

“Yeah, sounds teachers petty kinda stuff to me. Do they all have apples?”

“Oh, from where the belching bog toads are?”

“Yes, but bog apples are terrible for the toad’s digestion.”

I nodded but I know that the toads only eat bugs.

“Would you like to come in for tea?” she asked, and who am I to turn down such an offer?

We chatted long into the night about a great many things and had many giggles, until we were sleepy. I slept with Billy out on the porch swing. It was nice.

I woke more nervouser than a nervous nelly nearly nipped by a gnat navy in neverland. Then I realised I had spent the whole time writing that speech and it was gonna be a zoom meeting with mystic mind messages. I love wasting my time.

Karina made me acorn omelette and toadstool tea for breakfast, it was quite the treat and later on the meeting began.

117 wood witches from all over The Enchanted Woods made the meeting and while they all stared at me, I relayed my mind message via mysticness.

“Being a wood witch, is of great responsibility and your duty is always to the trees and creatures that live within their mighty branches. As with all magic, there are consequences to using it willy nilly and if you do, The Grand High Wizard will probably turn you into a hedgehog so it’s best not to.

Each day us beings of magic must strive to make The Enchanted Woods a better place for all inhabitants, even if we occasionally eat them, or cook them, or even make them go ‘poof’ in a puff of smoke.

Finally, these woods, where magic and wonder thrive, is our home, and together we must protect and nurture it for all of time.

Thank you wood witches. Go forth and be everything you can be, and never forget, the sisterhood of wood witchery!”

There was a huge silent cheer.

Later that afternoon I said goodbye to Karina the Hun. We did hit it off though. I’m certain I’ll see a lot more of her.

Billy and I hit the dusty trail and found ourselves sleeping in the rainy part of the woods this time.

We finally made it back just before darkness set in. We would have got there earlier had we not been attacked by a gang of blood-sucking drop bears on the way. I turned them into fluffy squirrels and sent them to Karina’s, cos you know, she’s squirrel-aligned and everything. I’m sure she’ll look after them and maybe they won’t be so angry anymore.

Billy crashed over my place, as the dark had set in.

Today I took some time to replenish some of my pungent and powerful potion supply. It had to be done, cos magic doesn’t make itself you know.

After the place was whiffing up a good’un I finished and caught 107 winks after a tough week.

Well, it was a great honour to speak at the AGM and it was great to meet another new friend. I mean, Karina seems totally and completely crazy and out there, but what can ya do, she’s a mate?

I’m gonna write some cool stories for you now, and talking of cool stories you can get my brand new cryptozoological adventure, The Hairy Man right now, if that kinda thing floats your boat.

Magical bonds can be formed when a love knows no bounds, but sometimes the real monster, comes in human form…

Grab yours now & take a walk on the wild side!

I hope the week brings you love and joy cos that the real magic right there!