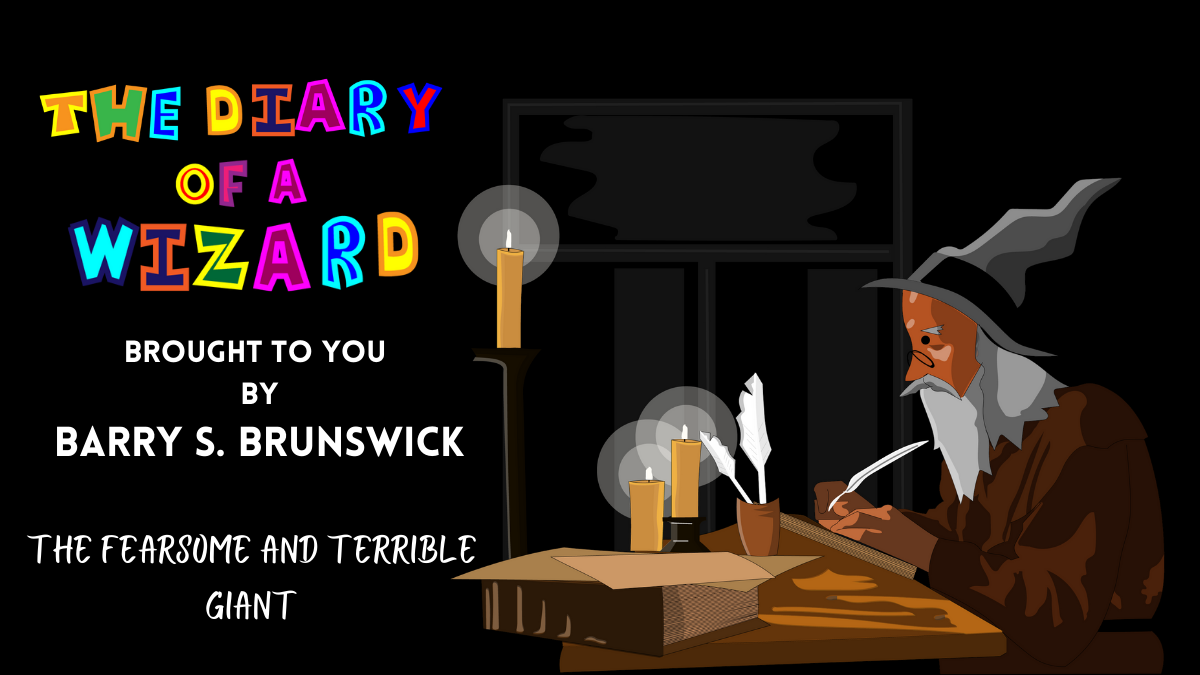 Hey friend! This week there’s been reports of a fearsome and terrible giant, so gigantically ginormous that even the ogres are shakily scared like cowardy custards. I’m not a massive fan of ogres, but I’d better see if I can help ’em out of a jam I s’pose.

Don’t worry I have giant experience, back in week 4, I met some pigmy giants, it’s one of my faves, check it out here if you missed it. Or your traditional beanstalky kind in week 28, take a look here if you haven’t seen it yet.

The Fearsome and Terrible Giant: Day One

A frantic villager banged unsurprisingly, frantically on my door this morning. He said the ogres have been getting terrorised by a fearsome and terrible giant, and when they send an angry mob, they have been disturbed by said giant also. If the ogres flee their home, they’re certain, in no time, that their villages will be overrun by stinky ogres. I have to help!

I summoned my trusty magical steed Billy, the oversized talking cockney mountain goat and we made haste. There was no time to lose.

We made our way between the rocks and spent the night on the Precarious Slope that hangs above the Unfathomable Gorge of Doom. I know it sounds dangerous, but names can sometimes be misleading, so really, it’s quite a safe slope over a mundane looking gorge.

We set off somewhere near dawn’s crack and after 1 hour and 32 minutes, we got off the rocks. Although Billy is a wonderful climber being a mountain goat, the prospect of a grisly demise by fallage and splattage could never be ruled out. It was indeed a relief to get back onto the ground. Though I have to say fallage and splattage sounds pretty good when it comes to possibly been stomped to a pancake by a giant instead. Choices choices!

We were nearing Ogresville by sundown, I could tell by the belchy noises and awful pong kicking up. There’s no way I’m tangling with giants while it’s dark, so we’ll sleep under this creaky old tree out of the wild wind.

As you may have guessed, sleeping under a creaky old tree wasn’t the best idea in the world when it was windy, but not for the reasons you may expect. The tree did a great job of protecting us from the wind cos you see, creaky old trees have been surviving the winds since time forgot. The trouble is, the 7-toed monkey possums with loopy tails know that to, and I awoke to fruit raining down on me as they chattily enjoyed their breakfast.

I had to do a special cleany spell so I wouldn’t get covered in ants. Yes, maybe in the human world ants get all over you and bite you and stuff, but in The Enchanted Woods, they pick you up, carry you off, so their weird ant larvae things can fatten themselves up, but stripping your flesh to the bone.

We headed cautiously down to Ogresville. Before we reached the gates, we heard a marchy kafuffle and coming over the hill chanting was a load of villagers. They had burning torches and pitch forks and were going directly for the ogre’s town. This was clearly not an uncommon event around here. We took cover and sat in wait.

Before the villagers reached the gate, low and behold, a fearsome and terrible giant rushed from the treeline, sending the villagers scattering in all directions, and the warning bell in Ogresville ringing loud.

Great! Now not only am I going to have to go to sleep under the stars with the possibility of getting stomped by a giant, I also have to try and sleep there with a really loud bell going off the whole time.

Only got 3 winks last night cos of that stupid bell. I got up, ate some breakfast, had a cup of tea and was ready to make for the village. Then the bell stopped.

We went down to Ogresville and the ogres welcomed us in. I had to have my staff at the ready cos an ogre’ll eat ya if he gets the chance, and I’m trying to help them out.

I met with the Chief Bully McSplodge, and explained that I would deal with the giant. All they had to do is remain in place and I’ll have this cleaned up in a jiffy. I like to use the term, “a jiffy” cos nobody really has a clue what a jiffy is, so it allows me some leeway.

I took Billy with me so he didn’t get munched on by an ogre and we followed the fresh giant footprints. I’m not the best tracker in the world, but giants tend to leave a massive crater when they take a step, so I won’t be hiring any help on this one. Strangely, the footprints were smaller than I would have expected them to be from such a huge giant.

We followed the tracks, all day, all the way up onto the top of a hill. At the top was a cave, and as we nervously approached it, a fearsome and terrible giant burst out the shadows roaring. We ran to make space for ourselves. It was dressed in a trench coat and was wearing a hat and it seemed to be in a terrible rage.

I jammed my staff down into the ground and said, “You shall not get by me.”

The giant tried to get by me.

So once again but way louder and more dramatically, I said, “YOU SHALL NOT GET BY ME!” Some glowy light kinda surrounded the whole thing and it retreated back to its dwelling.

The dark had arrived and now was time to rest. I’ll be back in the morrow. We made camp for the night, not too far away.

The morrow came and the golden sun dothed riseth or something like that, we had a quick feed and headed back towards the cave. Maybe we could catch the giant unawares and find out what it wants or how to stop it. It’s certainly, worth a try I’d say.

We snuck once again up to the cave, and then I left Billy outside and edged forward as the haunted darkness swallowed me whole. I carried on through until I saw some coat hooks on the cave wall. On one the hat, on the other, the trench coat. And across the way, sleeping in three separate beds, were three trolls. This is unbelievable, the giant was three trolls in a trench coat standing on each other’s shoulders!

As clear as a bell I yelled. “And what is your game busters, what’s going on here then?”

They awoke a bit grumpy as trolls tend to do, they thought about clubbing me first but decided better of it, being I’m a wizard and all. It turns out they’re just kids, playing a prank on the ogres and villagers for a giggle.

“Okay then you better come with me.”

“What if I dun’t wants toos?” one of them said.

“I’ll turn you onto a hedgehog.”

They obviously agreed. So I took the three of them down to Ogresville to explain what had happened. The trolls apologised.

Bully McSplodge agreed that they’d say no more on the matter, if the troll kids would dress and act like the giant when the angry mobs come for the ogres to scare them off. They agreed, and my work there was done!

We wave goodbye and hit the dusty trail that night.

We came the other way back, through the bluebell valley. It had been quite the week and we were exhausted, so the thought of tangling with anything else terrifying was enough to fray my last nerve, let me tell you. We got through safely and at last were back at my place by the time the sun went down.

Some food and 79 winks seem in order.

I sent Billy on his way this morning, I like to have some time to reflect at the end of the week. It turns out with the ogres and the three troll kids in a trench coat, all parties are happy with the deal. All parties except that is, the villagers of course, but they’re all humany and have no respect for The Enchanted Woods. This place is unspoiled and the less angry mobs, or rampaging villagers that come here, the better.

I’m gonna write some cool stories for you now. I hope your week is full of nachos, ice cream and cake! (Not all at the same time though, of course.)