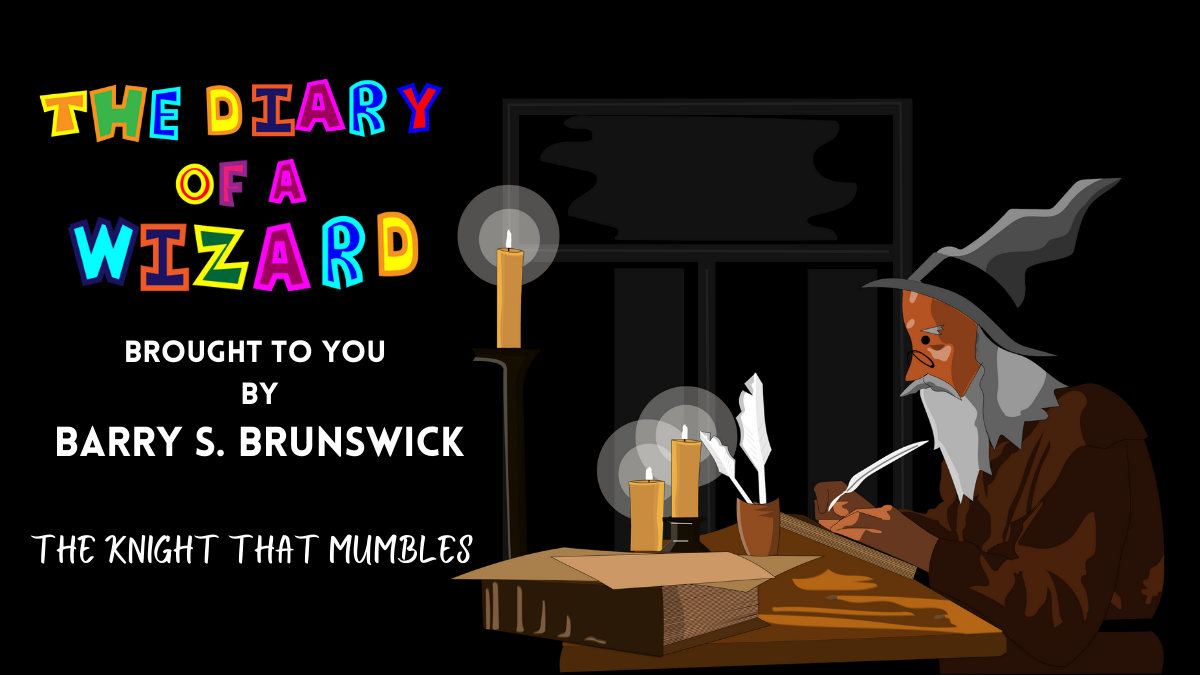 Hey friend! This week on the best blog for magical mayhem, I’ve got to help out a knight in shining armour. Obviously, things will not be straight forward, cos well, this is Diary of a Wizard, and nothing’s ever straight forward. But you knew that already, or maybe you didn’t, so you do now. We’re all informed. Hooray!!

The Knight That Mumbles: Day One

A sweaty rider hammered on my door this morning with a message from his master the knight in shining armour, Sir Mumble-a lot. I have to say I’ve never heard of him, but most knights tackle dragons and the such so I better see if I can help him.

We all know knights normally live in castles, but on this occasion, he wants me to meet him in his secret tree house. When I pushed the rider on how I would know where it is if it’s a secret, he tapped his nose and told me I will know when the time is right. For now I should head eastwards, before veering northwards towards The North Woods surprisingly.

The rider was pretty vague about what exactly the knight needed help with and he galloped away while I summoned my trusty magical steed Billy, the oversized talking cockney mountain goat and made ready, to do the off, bright and breezy in the morrow.

The Knight That Mumbles: Day Two

I packed my sword for this trip because knights tend to be a bit fighty and stabby and headed off somewhere near dawn’s crack.

We headed eastwards like the sweaty rider instructed. We had to take a tricky path, between the jagged rocks where we were attacked by a vicious swarm of hooked-beaked rock crows. They’re kinda like normal crows, but with a vicious hooked beak and they live on the rocks, obviously. I turned them all into straight-beaked hummingbirds so we could make a speedy getaway. Don’t worry though, they’ll turn back after we’re long gone.

We made camp by the babbling brook.

The Knight That Mumbles: Day Three

We set off early and I’ll tell you, I wouldn’t wanna spend another second with a brook that babbles. The thing wouldn’t stop talking all night, babbling on and on, about this and that. I had to stick two toadstools in my ears to catch even 1 wink.

Today we headed northwards, towards The North Woods. It was bucketing down with rain and the going was slippery.

We finally reached The North Woods and before we got too far, a rope ladder fell out of the tree and hit me on the head. It knocked my hat off, and in turn, me off Billy. I hit the deck like a sack of potatoes, but a bit more wizardy than potatoes are, and my robes got covered in mud.

I looked up and at the top of the ladder was a tree house. This was the place I was looking for. I left Billy at the bottom and climbed up.

There was a knight in shining armour sitting at a small round plastic table. Apparently, knights only like their tables to be round. His armour shone brightly and he was wearing a helmet with a massive feather sticking out the top. I said hello and introduced myself.

Not much of a conversationist it seems.

He made me a cup of tea and I tried all evening to get him to tell me what was going on, but I got nothing but mumbles. I can see why he’s called Sir Mumble-a lot.

I need to find a way of communicating with him, or I simply can’t help him. I climbed back down the rope ladder and made camp with Billy. I guess I’d better sleep on this conundrum.

The Knight That Mumbles: Day Four

I went up the ladder early this morning and Sir Mumble-a lot, made me a nice breakfast while he mumbled endlessly.

After breakfast I had a fantastic idea, even if I do say so myself. It seemed maybe he could speak if I removed his helmet. I explained what I was going to do and as he sat down, I tugged and pulled and yanked and twisted but the helmet was suck fast.

That meant of course, I needed a magical solution. I did a vanishy spell and the helmet vanished in an enormous puff of blue smoke.

“Oh, what a relief,” he gasped. “I’ve been stuck mumbling for an age. I got clonked on the head by a fearsome cave troll’s club, I ran him through, but he bent my helmet out of shape. I’ve been trapped like that for years.”

“Well, everyone will call you Sir Talk-a lot now!” I joked.

“Oh no they won’t, my name is Mumble-a lot, as coincidence would have it.”

We talked and talked all night. The poor fellow was itching to tell stories and jokes after all the years of mumbles. As the night crept along I grew weary.

I waved goodbye and he said: “Know this Wizard, should you ever need a bold and noble warrior to run something through, I’ll heed your call. You have my sword anytime you need it.”

I mean, I have my own sword already, but I get what he’s saying.

I made camp with Billy for the night.

We’ll head off bright and breezy in the morrow.

The Knight That Mumbles: Day Five

Set off this morning, first we’re heading southwards, and then westwards to The West Woods, funny how that works.

We journeyed all day, and finally made camp near a deadly badger stoat hole. That was not before we were attacked by a horde of angry dwarfs. I didn’t wanna lay waste to them and chop them up, so I turned them into a horde of just mildly frustrated forest nymphs, but don’t worry, they’ll turn back after a day or so. They shouldn’t tangle with a wizard!

The Knight That Mumbles: Day Six

Making camp near a deadly badger stoat hole proved to be a mistake. They’re called “deadly” cos well, they are deadly. I had to run through the forest on the blackest of nights and boinked my nose on a tree. Once again however, I magically and miraculously evaded death. You don’t get to live as long as I have without evading death a few times I can tell you.

Finally made it home and sent Billy on his way late in the afternoon. I baked a cake, a Victoria sponge, very nice it was too.

The Knight That Mumbles: Day Seven

Well yet another week in The Enchanted Woods is over and I have evaded certain death, and helped a knight in shining armour, I’d say that’s a success.

I’m not sure I will summon him should I need a brave and noble warrior. In my opinion he’s proven a pretty poor warrior given he got clonked on the head by a cave troll in the first place, that bent his helmet all out of shape. I’d say he was lucky his head didn’t get bent out of shape! And I’m friends with like, cave witches, and Viking marauders, and wood witches, and cyclops, and yowies, and aliens, and 12 ft octopus men, and a kraken, and dinosaurs, and… Well you get the idea.

Right, I’m gonna write some cool stories for you now.

May your week full of many giggles and spattering of sunshine.

Barry S. Brunswick is an Author and Best Selling Poet.
Have you read Barry’s blog about the Fantasy Series?
You can buy his books on Amazon:
Dreamland Part 1 – The Fabric of Dreams
Dreamland Part 2 – The Masters of Light
Dreamland Part 3 – The Veil of Shadow
New Release! Hairy Man – a short story
The War of The Turnips
Barry Brunswick’s Tall Tales – A Short Story Collection