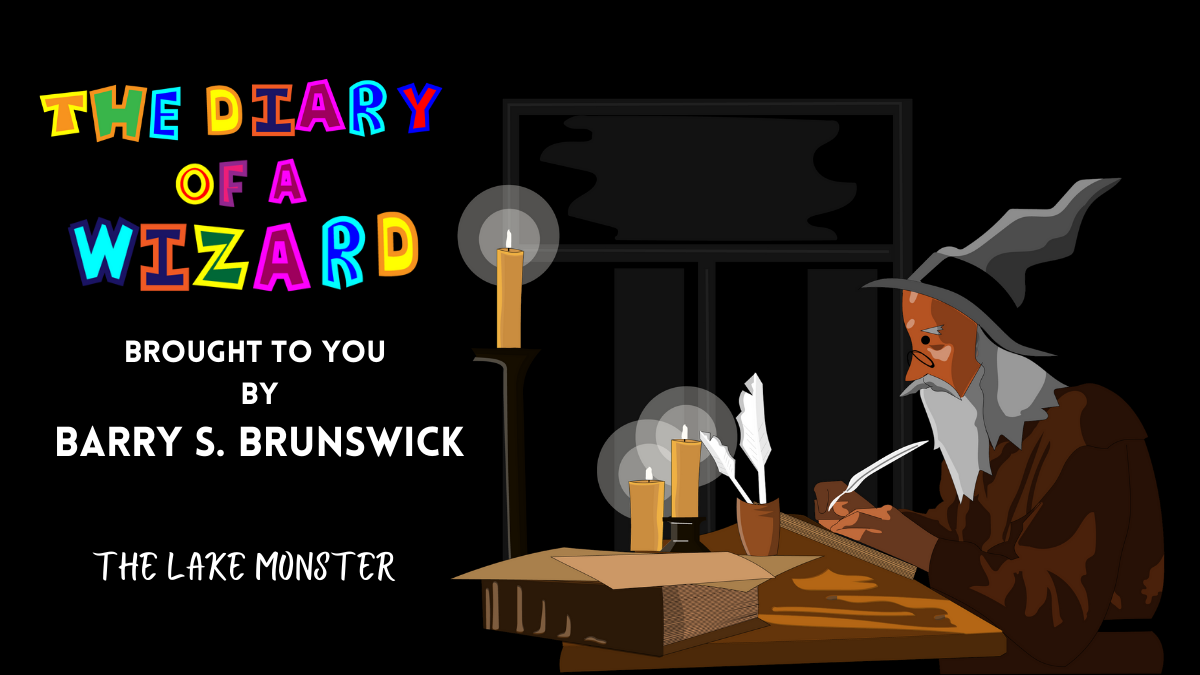 Hey friend! Welcome! This is where we take the diary of a wizard and turn it into the best blog around for your entertainment purposes. This week I have to help free a village of dwarfs from a deadly lake monster. Wish me luck, monsters in my experience tend to be scary!

The Lake Monster: Day One

Got an urgent message from a weary rider this morning, he certainly was in a flap. He was from the dwarf tribe by the lake. He was shakily scared and frantic with fright. Apparently, there’s a fearsome dwarf-eating monster living in the lake by their village. I can’t tell you the name of the village cos it can’t be written in human languages or spoken in human tongue.

I wasted no time and hailed my trusty magical steed Horace, but he took an age to arrive. For a moment I thought I saw him hiding in a bush, but no, it can’t have been him. There wasn’t time to wait so I had to ride on the back of the dwarf’s Shetland pony.

The poor pony was panting like an old yard dog by the time we got to the Raging River Rapid. It didn’t take long until we got attacked by rat-sized mosquitoes. I had to make a smoky spell to keep the little blighters away. 17 of them can suck all your blood out and leave you dangling like a bag, all empty and stuff.

We’ll sleep here and make the lake in the morrow.

Got awoken with the camp being invaded by flappy necked bush turkeys. They sound harmless enough but when you factor in the fact their 71/2 feet tall, have a beak as sharp as a bayonette, and slashing 9inch talons, it’s not ideal.

Lucky the dwarf was pretty handy in a battle and while he kept them busy, I whisked up a spell and changed them to wombats. They were pretty mad. Don’t worry though they’ll turn back in two days, when we’re long gone.

The rest of the day was less eventful gladly enough. I had to walk half the way cos the Shetland pony was struggling hard. I rubbed some magic ointment on its tired hooves.

We made the village that I can’t tell you the name of by sundown, and the welcome was warm. A little too warm in fact, I feel like my head is going to be a little fuzzy in the morrow.

I went for a reconnaissance mission to see what I was facing this morning. I had to put on my sunglasses after the festivities last night, but I got through it somehow.

Pretty interesting, the way the village I can’t tell you the name of works. We all know most dwarfs mine for a living, but not these dwarfs. These ones process slimy lake cabbage and sell it around the land for fertiliser or in a swamp troll’s case, breakfast.

Three dwarfs had been working with their flippers on at different times of day and all three have vanished. The dwarfs are frightened there’s a dwarf-eating lake monster in the lake. It’s even been spotted by others. It’s 13ft long and as sleek as a torpedo through the water.

I’ve figured out a way to find out more, but that can wait for the morrow.

I ate too much tonight, he writes as he groans, so I’m going beddy byes now, I could do with 42 winks.

I donned a head bubble and went to watch the dwarfs work. They were shakily scared the whole time, but something tells me there’s more to this than meets the eye.

I noticed as they harvest the slimy lake cabbage, all the little snails and things fall off, so the fish come along and eat them. There’s lots of little fish swimming around them all the time.

I magicked up some fish, I wouldn’t want to use real ones now would I? And took a boat out to the centre of the lake and bated up.

I’m hoping to maybe get a glimpse of the monster even if I have to stay out here all night.

I stayed out there all night and nothing happened, this morning, I saw the lake monster! Don’t worry I didn’t get eaten or drowned, pretty unlikely when the “monster” was 7 king penguins. When they swam up to me they looked like one huge creature. I nearly jumped, but then when they swam apart it was clear they were a family. I saw them frolicking. They were a happy bunch indeed! I suspect the dwarfs didn’t vanish at, I suspect they got shakily scared and swam for it.

I think I know where I’ll find them in the morrow. Then I’ll have to hit the dusty trail if I’ll have any time to write cool stories for you.

Just as I suspected, the three dwarfs were in the big barn behind the village that I can’t tell you the name of. This is where they keep all the cakes and pies. They could hardly walk having been living off cakes and pies for the last two weeks or more.

The villagers rejoiced that their brethren had returned safe and sound, all of them except the baker cos they owe him two weeks’ worth of cakes and pies. They also rejoiced that the village that I can’t tell you the name o,f was safe from lake monsters, but the fish were not safe from penguins!

The party was so hard, I have to stay the night.

I shrunk myself to a small size and flew on a falcon to get back, I had no time to tangle with rat-sized mosquitoes or flappy necked bush turkeys, if I was to have time to write cool stories for you. Beside with my fuzzy head I wasn’t up for a walk. Of course, it would have been useful if Horace had been around, but never mind, these things happen.

Right, I’ll finish up the week the only way I like to, and write some cool stories for you now. It does make you wonder what madness next week will hold.

1 thought on “The Diary of a Wizard – Week Thirteen”