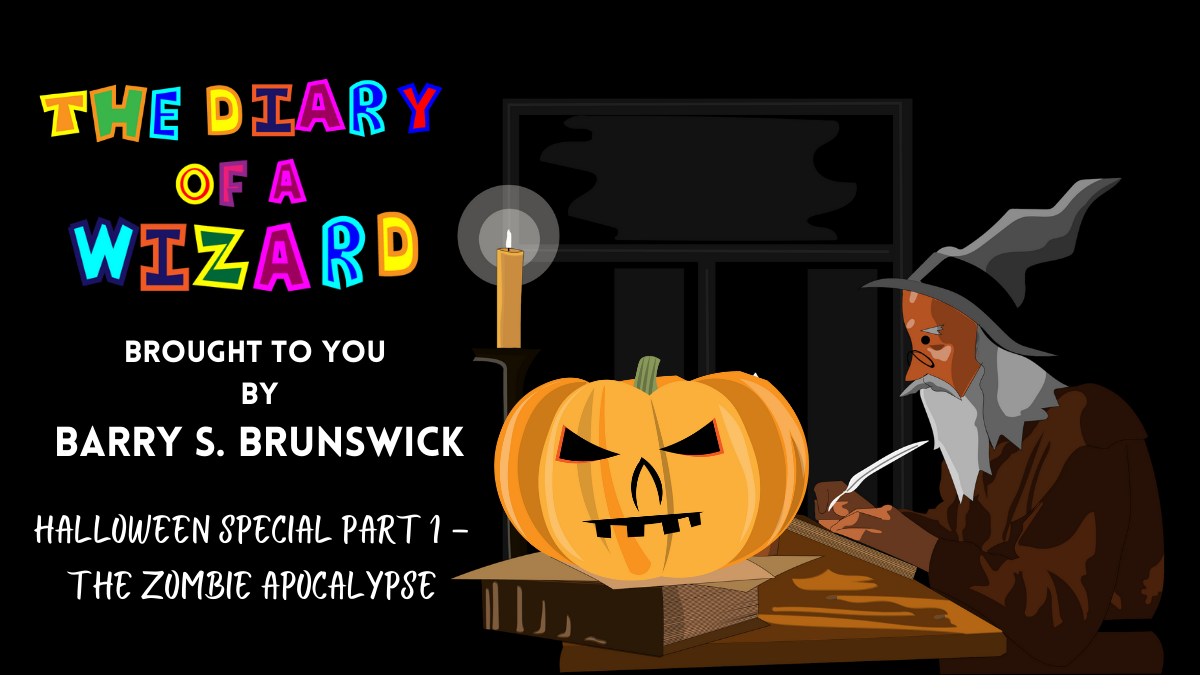 Hey friend! This week on the best blog for all things Halloween fun, I’m doing a Halloween special! Of course, they’ll be undead zombie freaks running amok in The Enchanted Woods. This sounds like a job for a miraculously marvellous mage or even a whacky wonderous wizard! Let’s see if we can make the dead, that became undead, redead!

I had previously arranged a meeting with my best friend and 500-year-old cave witch, Caladium Crane for tea, so I’m heading out to her cave today. I summoned my trusty magical steed Billy, the oversized talking cockney mountain goat and set off.

Caladium had warned me there’s a blood thirsty gang of rock goblins hanging around and they’ve been robbing weary travellers so on this adventure, I’ll need my sword. You all know I hate violence, but it seems there is little choice.

We made the cave by lunchtime and took some acorn tea. It was nice to see Caladium again. We do have some weird fun.

We played some board games and things, then she invited me to stay over so we can go and find some dilly root tomorrow. She uses it in certain spells, and it can be quite the challenge to locate.

We made merry into the evening, until we were sleepy.

We woke up not so bright and breezy with slightly fuzzy heads. We had breakfast and then headed out to the marshland where the dilly root can be found. We trapsed for many miles through the mud and omska yet still could find no sign of the root.

We were almost on the verge of quitting when we heard a moaning sound. We looked over yonder and that was when we realised there was a horde of tree-like zombies coming towards us! There were hundreds of them!!

The best and only solution to this situation is to do something I never do and run!

We tore through the woods, back towards the cave and the zombies were everywhere. Luckily, they’re pretty jerky and slow not like the modern-day sprinting ones. Things can be a bit old fashioned round here at times.

We scarpered quicker than a fast furry ferret with its face on fire. Just as our puff was gonna run out, we got inside the cave and barricaded the entrance with boulders, of course placed there by a little wondrous wizardry and cave witchery. I have to watch my old back you know.

For the moment we were safe inside, but we needed a plan, and needed one fast. We sat out the night and prepared for the next day. It was clear a battle was on our hands and a most gravely grievous situation was unfolding.

Bit of luck I packed my sword!

We removed the boulders just at dawn’s crack. Caladium had been rummaging around for a 47 mins in the other room, well chamber anyway, I guess, as we’re in a cave. She told me to go ahead and she’d meet me outside, but she kept giggling and saying, “I’ve prepared for this day for years.” She seems worryingly pleased about the bleak situation but what can you do, she’s a mate?

I stepped outside, staff in one hand, sword in the other, and in an instant a zombie ran at me. I had to barbarically behead it with a flash of my blade, then I swooped around removing a second zombie head, and then ran a third through. Then three were upon me in an instant. An enormous bang went off right next to my head followed almost instantly by a second. Two of the zombie’s heads had been removed from their shoulders by explosion and splatage. I finished off the last one by cutting it clean in half lengthways. It was super gross and kinda gooey. But at last, we had a second to regroup.

Caladium was standing there, in full war paint, with a shotgun in either hand. She had shells going across her body both ways and stood there smirking with her guns smoking.

“We need our steeds, and then we can fix the problem,” she growled with a slight maniacal look in her eye.

With that she raised a horn to her lips and a strange sound echoed around the woods. Then she fired off her shotguns again and zombie brains left zombie heads. She kept reloading and firing going, “Oh yeah! I got one. Ha! You’re undead and redead! Yep, got ya! Woop! Too easy baby! Oh, sorry, that one was an elf. Oooh two birds with one stone! Off with ya head! Ooops! Well, stay out of my line of fire pixie!”

I whistled loud for Billy.

Within moments Caladium’s steed the enormous battle moose with no name, an annoymoose, came thundering out of the trees. You met him back in Week 15 when we had to battle some Real Estate Pixies, [check it out here if you didn’t see it]. He was closely followed by Billy.

We fought zombies all day and then into the evening before retreating back to the cave for some rest. The boulder barricade certainly does the job. Sometimes I can’t think what I’d do without magic, but then, I probably wouldn’t get as much trouble as I do I s’pose.

The morning arrived and once again we took down the barriers. The zombies were groaning and doing what they do, but oddly, it seemed they weren’t actually looking for us as we had first thought.

I watched closely and the zombies weren’t towards us, it was only when we stand in their way they seem aggressive. They were consuming vegetation, and in turn, the vegetation would become a tree-like zombie. These aren’t just zombies, they’re vegan zombies!

We have to protect the plants. It seems anything that’s made out of fruit, nut or vegetable, is at a risk most terrible and that isn’t good in The Enchanted Wood were most things are plant-based. They’ll be millions of them and even though Caladium’s doing her very best to kill anything that moves atop her battle moose, I just don’t think she’ll have enough shells.

We stayed together but tore all over the woods taking out as many of those undead vegetables as we could. My sword was covered in sap and Caladium’s trigger fingers were getting tired.

By the time the sun fell, we took to higher ground to catch maybe 13 winks. Sleeping is hard when there’s vegan zombies running riot in the woods.

We awoke and to our horror we could see the zombie horde in the distance.

“Where are they headed?” I asked.

“They’re heading for the village! And they just got their yearly consignment of cider apples. It’ll be a massacre!” Caladium cried.

My mind worked quickly: There’s half a million apples at least. The village is famed for its cider. And it’ll take us a day to get there riding as fast as we can. Not to mention all the vegan zombies we’d have to kill as we go. I’ll need to knock up a no-sleepy spell to keep us awake and make like a zombie and head off.

We rode as fast as we could right through the night, this is where a good magical steed is essential.

We neared the village and beat most of the zombies that were headed there. The villagers had the gates locked and were fighting them back as best they could. Boy were they glad to see us.

We cut or shot our way through the sea of undead vegetables. The crowd and the villagers quickly opened the gates. We rushed inside and they slammed them firmly behind us and locked them hard.

While Caladium stayed at the entrance with her battle moose, awaiting the zombies with every intention of holding them back. I quickly rounded up the villagers and got them out the back. The zombies had no interest in them, so they could escape safely.

Then I joined Caladium and together using a few blasts of wondrous wizardry and a bit of cave witchery we managed to reinforce the gates and that held the zombies back all night. Glad we did the no sleepy spell cos things are getting tough.

It was 10.37 am when the vegan zombie horde finally broke through the gate. There were thousands of them, and the wood just couldn’t take it any longer. It splintered to pieces, and they streamed immediately for the apple carts loaded high in the centre of the village.

Caladium reached into her robes and with a smirk she pulled out a grenade she’d been saving “for a rainy day” pulled the pin and threw it into the middle of the zombie crowd.

The explosion boomed out, sending us both flying off our steeds. Chunks of vegan zombie and apple rained down from the sky.

Battered and bruised we staggered to our feet and slipped on the sloppy apple sauce that was on the ground. We fell backwards into the huge crater that the mighty explosion had created. Then we heard moaning, lots of moaning. More zombies were coming and coming fast. We were stricken and dazed in a crater with undead freaks relentlessly coming for the apples, and worst of all, we were covered from head to toe in apple juice! They’re gonna rip us to shreds…

Crumbs and good grief! You better come back next week to find out what happens friend!

1 thought on “The Diary of a Wizard – Week Twenty Two”