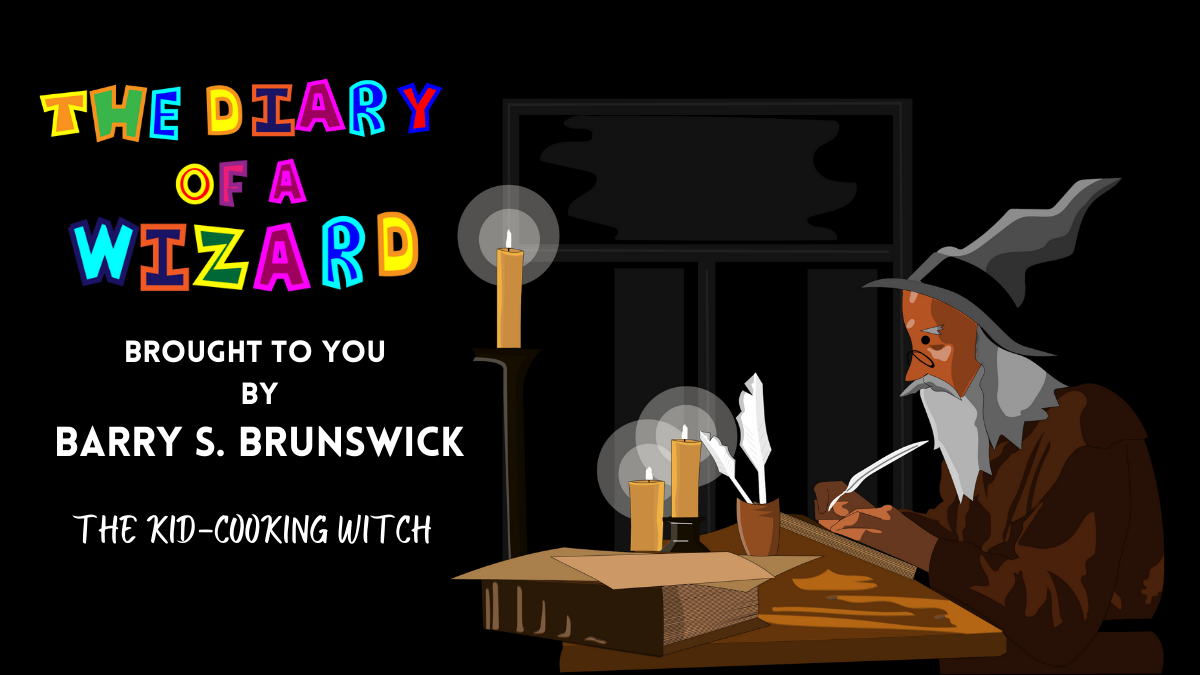 Hey friend! Welcome to the best blog for where the happenings of wizards happen. This week I’ve heard a rumour that there’s a kid-eating witch in The Enchanted Woods. This calls for an immediate investigation.

The Kid-Cooking Witch: Day One

This morning a little bird told me—and in this case a little bird isn’t a term of speech, but it was actually a little bluetit—that some kids have gone missing. All I know is where they were last seen so I’d better get out there quick smart.

I grabbed my trusty magical steed, Billy the oversized talking cockney mountain goat and with no time to lose we headed off. We have to reach the human village by the morrow, so I’m afraid Billy will have to go all night and I’ll take 13 winks on the wing. We can’t have any more kids vanishing.

I awoke with Billy still on the gallop, but he was growing tired. As we neared the outskirts of the village we came to a bridge. Upon the bridge there was a troll, a bridge troll obviously. The best thing to do is ask the troll what he knows.

“Oh, there’s a kid-eating witch in a house made of sweeties in the shady part of the woods.”

“The trees told me.”

Immediately I had my doubts cos bridge trolls can’t really be trusted. So, there was only one thing for it, I had to ask the trees themselves. The trees whispered in their wise language and informed me this indeed was the case. They also informed me the bridge troll can’t talk to the trees, he just got lucky this time. Ooh, those bridge trolls can be trixie! I had enough of that from the pixies last week (click here if ya didn’t see it).

Anyway, the shady part of the woods is a day and half away. We need refuel and rest and we’ll head off bright and breezy in the morrow.

It rained all morning, so the going was tough, even though the woods smell amazing, when that happens, it makes travel a little more slippy. And the hard thing is we had to weave around 6 bottomless pits! I just closed my eyes and let Billy do his thing. I didn’t like the thought of falling forever cos that’s a long time. Luckily Billy got me safely through and so I can do stuff that isn’t falling forever now instead which is a result. We reached the part of the woods where it gets kinda shady, but that didn’t matter as it was dark.

I hate the wet ground as a bed, so I magicked up two hammocks made from the branches of the trees. We should get where we’re going by, I’d say, 12.36 in the morrow.

We left at dawn’s crack and hit the trail. We made good time and reached the shady part of the woods late, but at 12.39 we had arrived. We took a snack and a rest, we had been riding hard after all.

I’ll give Billy a break and go and see if I can find anything. It’s pretty hard to see stuff in the shady part of the woods so my nose will come in useful.

It wasn’t long before I found a sweetie in a wrapper upon the forest floor, and it was even less long before I found another, and about the same amount of time as that, I found yet another. I followed the trail all the way to a house. The house was indeed made out sweeties but it had all leaves and bugs and stuff stuck to it cos it’s so sticky. Not quite as lovely as it’s supposed to look—never mentioned that in Hansel and Gretel but never mind—if you think about it, it’s bound to attract ants and wasps.

I went up and wrapped on the soggy gingerbread door, it doesn’t do so well in the elements. It opened and there stood a crooked old witch. “Yes?” she croaked.

“I’d be errrr, Granny Maddie and I live in a sweetie house… Well, I’d still definitely not be a kid cooking witch… No matter what the others say. I wasn’t there, and didn’t fatten them up with ginger bread.”

Ok that wasn’t quite what I expected. I went on, “Well, I spoke to a bridge troll and then the trees and they kinda said…”

She cut me off there, “I wouldn’t be fattening up kids and shutting them up in me oven. Which I definitely never did, and you can’t prove otherwise. Now just you ignore the old bridge troll, you can’t trust him!

Trees is liars too… Well known that is… Like that little bloke, Pinocchio, his nose grew every time he told a fib, and tree branches grow. The little puppet guy was made of trees after all. Oh, and they let them thieving squirrels hide in ‘em. You’d be best asking old Red Wolf… He knows I wasn’t there. Cos we was together, not eating kids or their granny’s or anything…. Uh huh… We was playing Guess Who and asking if “you have the big ears?” and stuff… Good game that is… You should come play one day.”

That’s it, I’m gonna have to chuck a bucket of water on her!

She gave it the big scream while she melted so as not to go out quietly. I’m gonna stay here the night. She must have some food, I’m starving!

I re-joined Billy and we hit the path back home. We have to go around the forgotten valley I think, but I can’t be sure, it’s hard to remember where that is. Anyway, we rode through the day and made good progress and slept the night beneath the stars.

I arrived home just as evening fell and said bye to Billy for now. I was more beaten than a beatnik’s badger skin bongo, so I just had some food and went to sleep. It was nice to get 72 winks.

I’m really glad I got rid of that witch. I hate killing things, but I can’t have her eating kids and grannies and stuff. The old red wolf is out there somewhere still, but maybe that’ll be a battle to fight another day. For all her flaws though, I have to say, she was a great chef.

I’m off to write some cool stories for you.