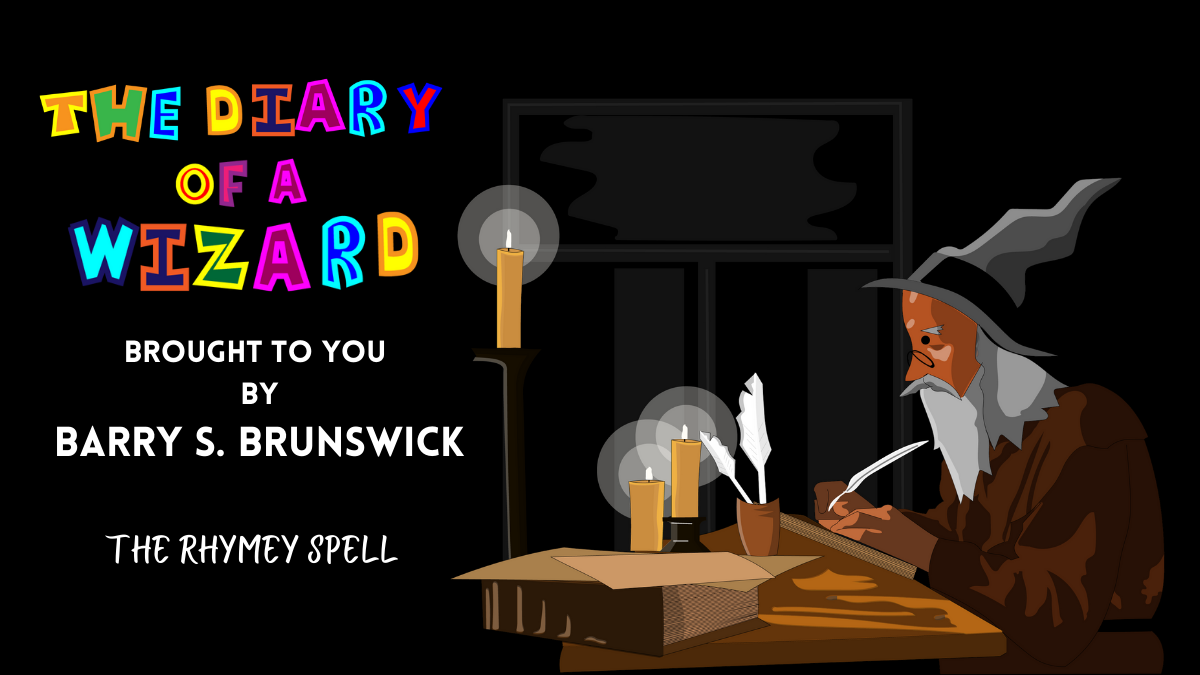 Hey friend! Welcome to the best blog around for the purest magical mayhem. This week I’m going to have to break a powerful spell which is something a wizard must do from time to time. Of course, things are bound to get oddball whacky, cos that’s what The Diary of a Wizard is all about. YAY!

The Rhymey Spell: Day One

This morning I have been informed by The Grand High Wizard, or GHW as I like to call him, I have to play a game of magical poker. I must admit hanging with GHW is pretty trying, as anyone who’s a regular consumer of Diary of a Wizard would know, so I face palmed, and eyerolled til my head nearly fell off. The trouble is see, old GHW, is my boss so I gotta do what he says. The order of Wizards demands it. It’s not an elected position or even a promotion he earned, he got the job because of pure nepotism. His grandfather’s brother was the previous GHW, and strangely he got to pick who fills his shoes, or pointy boots at least.

GHW says he’ll be here in the evening of the morrow, and I’m just hoping he doesn’t bring any of his weird mates with him cos he keeps poor company for the most part, which is why he uses his position to bully me into hanging out with him. Wizarding isn’t all puffs of smoke and sword fights you know.

I guess I’ll use the time to Grand High Wizard-proof my home. I just mean, hide all the stuff I really like.

I went for a little walk this morning, it was very pleasant. I kinda see it as the calm before the storm. No doubt GHW will want some food and drinks and stuff for our card night, so I’ll be doing a little baking.

By the time he arrived a couple of hours late as always, I had quite the spread laid on. Some cakes and scones and some oak tree flakes with salsa and freshly made dongleade, it’s like lemonade, but made from the dongle fruit you see.

Finally he arrived, not knocking, but doing the dramatic entrance walking through blue smoke thing. I hope he couldn’t see my eyeroll. I did however, manage to avoid the face palm this time.

In he “swooped” and before I knew it he was slapping me on the back and getting stuck into the cakes.

The cards went on the table, shuffled themselves and dealt. The idea is see, if you win the cards reward you with happy magic and if you lose, they reward you with trixie magic. It’s not really bad stuff, just annoying or inconvenient.

We played for hours until we were on the final hand. My luck took a nosedive when GHW drew a royal flush. Then the trixie magic happened…

And a moment later, I felt weird.
The trixe spell had become clear
And in another split second’s time,
I realised I could only talk and write in rhyme!
I wasn’t happy but GHW laughed til he cried
Then skipped away as he said, “goodbye”
This will take me much resolve
I have a problem of which to solve
But for now I’m beat so I’ll catch some winks
But come the morrow, I’ll need to think.

I woke up all bright and breezy
And had some breakfast just to feed me
I knew I would need some help
To find the answer, break the spell
So, I have to head over the wooden bridge
To the place where those fae-folk live
I needed them to help me please
Because it was them that made the cards you see.

I called my trusty magical steed
An oversized talking cockney mountain goat, Billy
And we rode through the woods til evening crept in
And made a camp in the biting wind
We would have got there more quickly
If we hadn’t been attacked by some dog-sized fleas
I turned them into mouse-sized swans
But don’t worry, they’ll turn back when we’re gone.

And now I’m just too beat to think
Time to catch 37 winks.

I woke up with the sky still black
And hit the road around dawn’s crack
Hopefully if we make good time
I can break today, this spell of rhyme
We had to set quite a pace
To reach the fae, before sunlight fades
And we only made it before the rain
We got once more, attacked again
This time by bat-sized death moths
With venomous fangs in angry mobs
I turned them all into moth-sized birds
But they’ll turn back once they’ve learned.

Finally, we reached the fae-folk’s home
Inside the bushes in a crystal dome
They welcomed us inside and gave us some tea
And I asked for the spell, to be released
They told me they couldn’t, not here and now
I’d need to travel right passed the town
They said I had to go and find
The golden letter in the abandoned mine
And then say the secret words
And they whispered them close so they couldn’t be heard.

There wasn’t much I could do but stay tonight
And make merry long into this night
Those fae folk like merriment it’s safe to say
But I grew tired, as it grew late
With a day of trekking tomorrow I think
I go to sleep and catch some winks.

I woke up to a golden morning
And hit the trail without a warning
I have to find that abandoned mine
Do you know how hard it is to talk in rhyme?
We headed off towards the miney part of the woods
Where the dwarfs dig down for sparkly goods
And then we saw it, the abandoned mine
What gave it away was a big red sign
The big red sign said: “Abandoned Mine”
So I left Billy and went inside.

In about 2 hours the dark did show
In the distance a golden glow
I headed for it without a thought
Hoping it was the thing I sought.

The closer I got, the glow grew brighter
The gold it shone, the mine grew lighter
And I can tell you, I did feel better
I was over the moon when I saw the letter
I waited not a second more
To say the words the fae-folk taught.

At last I can write and talk without rhyming again. YAY! Boy what a palaver that was. Billy and I better hit the dusty trail if I’m to get back in time to write some cool stories for you. Rhyming all the time is exhausting!

We made good time and camped near the fire. Everything was quiet for once. I didn’t have to turn anyone into anything or anything.

We left bright and breezy in the morning and by the time we made it back to my place we were both exhausted. I made some stew and we sat slumped at the kitchen table, that was when I spotted 3 cards hidden under the lacy doily. I saw the little corners sticking out. It seems that old GHW has stitched me up like a kipper here. He cheated! Why does this not surprise me at all?

I would say I’d never play with him again, but it seems I have no choice as he always demands I do it, but 2 can play at his game. I’m not a natural cheat but in the case of GHW, I may have to make an exception.

I took dinner and caught some winks in my own comfy bed.

Well, another week is over, and another problem solved. Getting caught rhyming was a bit tricky. It would have been even more tricky if I wasn’t a poet in the first place! (check out my poetry books for adults here, or kid friendly stuff in the Fantasy Series of poems).

It’s easy to point fingers at the Grand High Wizard for cheating me, but in this, like any situation, there is a lesson to be learned and I don’t intend to be cheated again.

Someone really needs to do something about him. Anyway, I mustn’t dwell upon that cos it’s time for me to write cool stories and maybe even poems for you now.

May your week be filled with sun and fun and a million smiles when it’s done! Oops a rhyme. A slight side effect from the rhymey spell, I think. I may accidently let a rhyme or two slip for a while.

Barry S. Brunswick is an Author and Best Selling Poet.
Have you read Barry’s blog about the Fantasy Series?
You can buy his books on Amazon:
Dreamland Part 1 – The Fabric of Dreams
Dreamland Part 2 – The Masters of Light
Dreamland Part 3 – The Veil of Shadow
New Release! Hairy Man a short story
The War of The Turnips
Barry Brunswick’s Tall Tales – A Short Story Collection

1 thought on “The Diary of a Wizard – Week Thirty Nine”