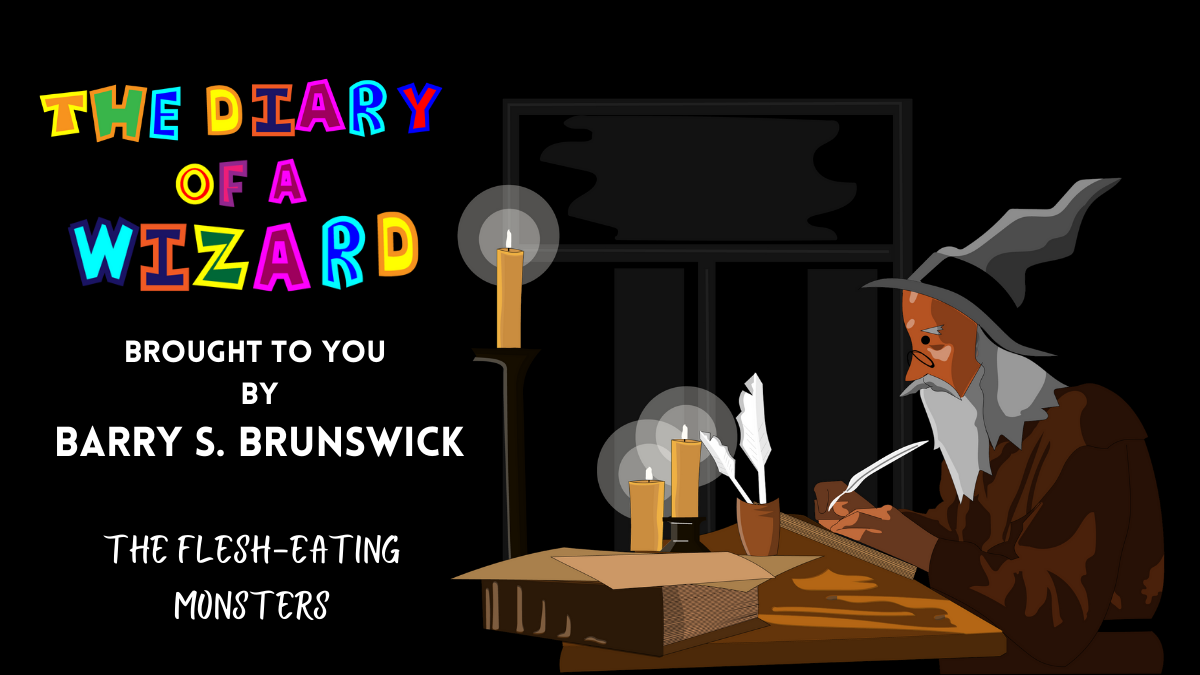 Hey friend! Welcome to the best blog in a world of whacky and wondrous wizardry. This week we have a pest problem out by the creek. They aren’t just your average pests so I’m going to need a hand. I can think of someone who may want to help.

The Flesh-Eating Monsters: Day One

I sent a magic smoke message to my best friend and 500-year-old cave witch, Caladium Crane this morning on account of a message I had received from a dragonfly faery—they ride dragonflies you see—that out by the creek animals and fae folk and lots of other things have been vanishing. I agreed to meet Caladium in the morrow, and we’d head down to the creek to investigate.

I summoned my trusty magical steed Billy, the oversized talking cockney mountain goat and we headed off in the afternoon.

We would have made much better progress if I hadn’t been attacked by 3 werewombats. I turned them into weresnails so they won’t be bothering me anymore. Don’t worry, they’ll turn back when I’m long gone.

We made camp for the night beneath a ghostly moon.

We headed off bright and breezy and hit the dusty trail. We reached Caladium’s cave by lunchtime. I haven’t seen her since back in week 33 when she made an elf spell – check it out here if you missed it.

We had a customary lunch and catch up. Of course, the lunch was gross, but I ate it anyway cos I didn’t wanna be rude. Being a cave witch, Caladium eats nasty stuff, that’s just the way she rolls, so I always eat whatever she serves up. Today it was pickled 100-year-old bat, and snail snot as a garnish.

We headed off on foot leaving Billy behind to chill and see the sights.

It’ll take us until night-time to reach the creek, and then we can start our investigation in the morrow.

We did reach the creek in good time, but a band of blood thirsty bush goblins tried to eat us on the way. Little did they realise they were messing with a wizard and a cave witch, and anyone that knows anything about Caladium, knows she’s a bit of a psycho so best not upset her. I turned two of them into hedgehogs and she sent green goblin blood splattering everywhere with her duel-wield daggers. Well, at least they won’t mess with us again, I mean they can’t, can they?

We had a little fermented toad juice and became all squiffy and had many belly laughs but in the end, we needed to sleep.

We awoke fuzzy headed to the morning which does tend to happen when we hang out and brewed up some tea. Only then were we ready to investigate.

We searched all over until I heard Caladium squeal with delight and to be honest, that always concerns me a bit.

I walked over and it was proven that I was indeed correct to be concerned a bit. There was an elf, that had half fallen down a hole and had most of the flesh missing from its body. There was dried claret everywhere, but Caladium was over the moon. She prodded it with her old hobnail boot as it squelched grossly, and loads of flies took to the air.

“You can see, it’s clearly some kind of carnivorous animal attack. Look at the scarring upon the bones.” She squelched it again as to show me. “Only something with razor sharp teeth could do that.”

She went on to prod at it with a stick this time. “And those markings are from long and deadly ripping claws. Nothing else could do that either.” She flicked the congealed mush from the end of the stick.

I obviously had to fight back throwing up at first but then I asked: “Why do you think it’s stuck in the hole?”

“It must have fallen in like that, after running out of blood and getting a bit low on flesh.”

“Right got it, shall we move on and see if we can find any other clues?”

“Spoil sport! You ruin all the fun. Let’s do everything you want to do shall we?”

“In this one instance, yes, but it’s pretty hard to stop you from doing anything.”

“Okay as it’s you.” She shrugged and huffed kinda brattily.

We walked further along the bank of the creek and just before the sun set, it was my turn to spot something.

“Hey check it out.” I called Caladium over. It was a short squat skeleton half buried in the ground.

“Oh yes, this one’s a dwarf skeleton. It’s been here a while and notice there is very little flesh left on its bones. That means whatever we’re dealing with, is certainly flesh-eating!”

It was getting dark, so we travelled a bit further and made camp. We were both certainly nervous nellies about sleeping near a flesh-eating whatever it was.

“I’m starving, “Caladium declared. “We’ve only had foragings for a couple of days. I might try some hunting.”

Before I could even work out where she’d got it from, a tube was to her lips and a blow dart was flying through the air. It struck a plump tree rabbit that fell to the ground with a thump.

Caladium went to fetch her prize. Then the ground started rumbling beneath our feet. Suddenly around the rabbit, the ground burst open and 7 fluffy flesh-eating gophers were consuming the stricken creature before our very eyes.

“Hey, that was mine!” Caladium cried. The gophers turned their gaze from the almost totally flesh-stripped tree rabbit, onto us! Their eyes burned evil red, and blood dripped from their fearsome gnashers.

I wished at that moment I’d brought my sword, but yeah, I hadn’t. I did an explodey spell and four of the scary hairy rodents vanished in a puff of smoke. Caladium expertly blow darted 2 and duel-wield daggered the last one just for what she refers to as “fun”.

She pulled a sack from basically nowhere and stuffed the 2 she’d blow darted into it.

“What are you doing?”

I must confess it was hard to argue with her on that one.

She slung the sack across her shoulder, and we started to make our way back along the creek bank, and back towards the cave where my best friend and 500-year-old cave witch Caladium Crane dwells.

We made camp again by the creek, and for once didn’t have to be nervous nellies so we partook in some fermented toad juice and got a little tiddly before sleepy byes.

With fuzzy heads Caladium and I traipsed miles across The Enchanted Woods and all the way back to her cave.

Caladium put her sack in the pantry.

“Would I be able to have one of those flesh-eating gophers for my pot?” I asked.

This is unlike Caladium, we share everything. When she turned her back for a second, I sneakily snuck into the pantry and to my non-surprise the sack was empty, and there were 2 burrow holes in the floor.

“Erm, well, yeah, the blow darts aren’t poisoned see, they’re just dunked in knocky out juice. And they are kinda cute, and everyone needs a guard flesh-eating gopher or two, don’t they?” she reasoned.

I rolled my eyes so hard my head nearly flipped right over.

We enjoyed a nice evening and at the end of a long day, me and my trusty magical steed, Billy, the oversized talking cockney mountain goat and I, set off for home.

We spent the night on the gallop and by the time evening fell, I was home. I sent Billy on his way and caught 127 winks cos I was as pooped as a puffed-out pony’s poorly pops.

I love adventures, but it’s always nice to get home. Mainly because that means I survived the quest and didn’t get munched by flesh-eating gophers or anything. Hooray!

Well, another week comes to an end in The Enchanted Woods, and once again, we have saved many creatures from a certain and grisly demise at the hands of a fearsome flesh-eating foe. I mean Caladium killed lots of stuff again but not as much stuff as the gophers would have, so it’s all good I guess. I know she’s a little different shall we say, but what can ya do, she’s a mate?

I’m off to write some cool stories for you now, I hope your week will be bountiful with funniness and giggles and no flesh-eating gophers!

Barry S. Brunswick is an Author and Best Selling Poet.
Have you read Barry’s blog about the Fantasy Series?
You can buy his books on Amazon:
Dreamland Part 1 – The Fabric of Dreams
Dreamland Part 2 – The Masters of Light
Dreamland Part 3 – The Veil of Shadow
New Release! Hairy Man a short story
The War of The Turnips
Barry Brunswick’s Tall Tales – A Short Story Collection