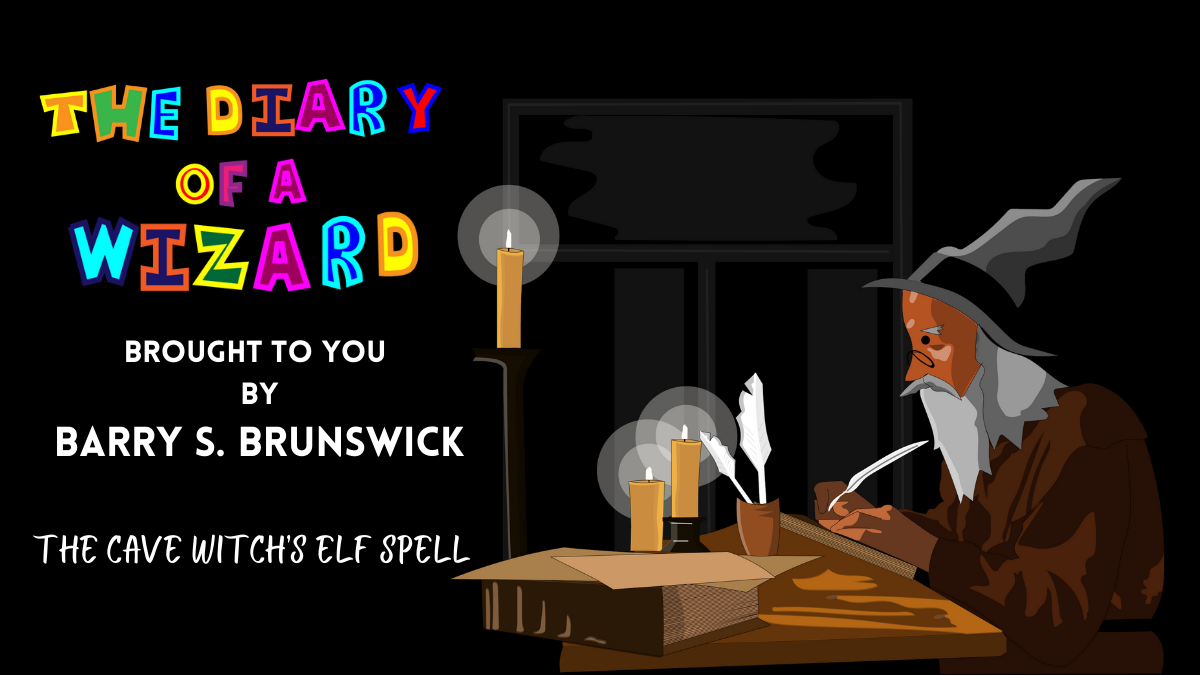 I received a message via a crow with a note stuck to its leg this morning. It was from my best friend and 500-year-old cave witch, Caladium Crane. It said she needed a bit of wizardy help to put a curse on the evil and very angrily vocal Ice Elf Queen, Karen. She is my best friend so I can’t ever say no for that alone, but I haven’t seen her for a few, so it has to be a yes. Should be fun!

I summoned my trusty magical steed Billy, the oversized talking cockney mountain goat, and I mean to set off, bright and breezy in the morrow.

We hit the dusty trail after breakfast and made good progress. It takes about a day to get there. We would have got further if it wasn’t for some bad weather and some blood sucking quick snails that are the size of rabbits. I had no choice but to turn them into veggie sucking slow slugs that are the size of badgers. Don’t worry they’ll turn back to their original form once we’re long gone.

The cave is situated in the Outback of Nowhere cos Caladium likes seclusion, and we will make to the cave early in the morrow. We’re already at Nowhere so now we just need to go out the back of it.

We slept under the stars in the middle of Nowhere in more ways than one, most confusing.

We did indeed make the cave late morning and Caladium got busy making lunch, which was of course, disgusting as usual. Cave witches do tend to eat gross stuff! As we ate, well she ate, and I tried my best not to spew, she told me what we needed to do.

“I need an elf to help me,” she announced.

“The only way to curse the evil and very angrily vocal Ice Elf Queen, Karen is with the use of a different elf. It doesn’t have to be an ice elf, just a normal one will do. But I don’t want it to be a lame toy making elf like the ones Santa has enslaved, I want a Lord of the Ringsy kinda woody one. You know one that knows things that are, things that were, things that have not yet come to pass.”

“Oh no, we’ve gotta get all tiddly on fermented snozz berry juice tonight and do some incantations and the like.”

How could I refuse such an offer?

We incanted til we could incant no more you could say we can’t incant!

We felt a bit giddy after a few, so we caught 13 winks to get ready for finding elves in the morrow.

We woke up fuzzy headed and before Caladium could offer me a spew worthy breakfast, we headed out elf finding.

We split to search but remained within earshot of each other, and after 2 hours and 27 minutes I heard a call.

I ran over and looked the creature up and down. “It’s a bit short to be a wood elf, isn’t it? And it doesn’t have pointy ears, and it does have a big beard, are you certain it’s not a dwarf?”

“I dunno, see if he can make the river turn into a big wave just by saying some words or something, or see how he goes with a bow and arrow, or maybe even see if he gets surrounded by woodland creatures when they’re around. I mean that’s science right there, wizard science anyway.”

“Right, throw him in the river with a bow and arrow and see if a beaver saves him. Got it.”

We never did see him again, but I guess at least we know he wasn’t an elf.

We searched deep into the afternoon, until finally we did find the kind of wood elf we were looking for and no, we didn’t bother throwing this one in the river. It was obviously an elf and luckily being the helpful sort, it agreed to assist.

We trekked back to the cave where the spell to create the curse for the evil and very angrily vocal Ice Elf Queen, Karen, will be mixed up in the morrow.

Caladium and I with the help of the elf, started mixing up a pungent potent and powerful potion using all manner of gross dried things from her pantry. For 3 hours and 13 minutes it was brewing and whiffing the place up something fierce.

“We’re nearly there,” she announced. “I just need to use the secret ingredient and some Lily pads, and I don’t have any. Would you be so kind as to nip down to the pond for me, my old friend?”

I had only been gone for 39 mins but when I returned the elf was nowhere to be seen.

“You know, the, elf, the one that was right here.”

She looked a little sheepish and giggled a little titter, and then shrugged, and then half-heartedly pointed at the cauldron.

“Well, I’m not sure “help” is the word I’d use for making it the secret ingredient of a spell and boiling it in a caldron.”

I rolled my eyes so hard they nearly came out my head and rolled off into the valley.

I gave her the lily pads and after a further 72 minutes, her curse on the evil and very angrily vocal Ice Elf Queen Karen, was complete. That should stop her from being able to cause trouble forever.

I waved goodbye to my friend that night and headed for home. It had been awesome to hang out again.

I made it home by late afternoon and sent Billy on his way, I could do with something that’s not gross to eat, a nice cup of tea and 29 winks.

Well, it’s been an awesome week and it was great to catch up with Caladium again, we always have a blast! Stopping the evil and very angrily vocal Ice Elf Queen, Karen from causing trouble will be of benefit to all the creatures of The Enchanted Woods.

I know she drowned a dwarf and chucked an elf in her pot, but honestly, for Caladium, that is a pretty low body count. I know she a complete psycho, but what can ya do, she’s a mate?

Anyway, I’m gonna write some cool stories for you now. I hope this week brings you magic and giggles!

1 thought on “The Diary of a Wizard – Week Thirty Three”