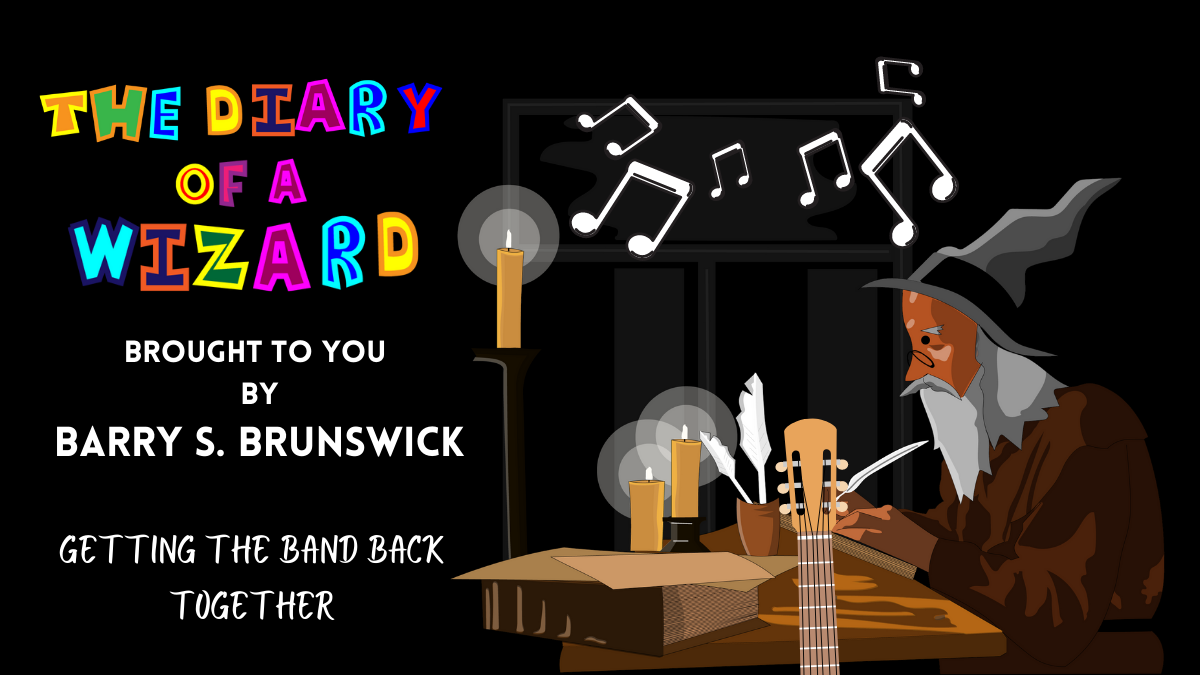 Hey friend! Welcome to the best blog for rock n roll wizardry. This week I’m getting the band back together, should be a wild ride!

Getting the Band Back Together: Day One

I was watching some memories earlier in a memory puddle, and I was listening to the old band, Mystic Sandwich again. 129 years ago, we were quite the sensation, when I was the manager. I mean now we’ve grown up and got lives, but sometimes I wonder what could have been. They were so talented, I think they could have made it really big. The thought won’t leave me. So, I’ve decided, it’s time to get the band back together and give it another crack.

No doubt I’ll spend the night dreaming about massive gigs and start in the morrow.

Getting the Band Back Together: Day Two

I woke up bright eyed and bushy tailed—this is of course just a figure of speech, I hadn’t actually got a tail, let alone a bushy one—and started to formulate a plan. It was going to be trying getting first, the boys to agree to come on tour, and second, booking some gigs.

Billy is too slow to get me all the places I need to get to this week, so I shrank myself to a small size and caught a crow. It’s always quicker how the crow flies don’t ya know?

First up it was the drummer, Blubba O’Pancake, now being a magical place, The Enchanted Woods can’t have your average 2 armed drummer, so Blubba is a 12 ft octopus man. He has an octopus for a head. This means he’s got ten arms and 2 legs so he’s killing it. He was easy to get on board cos he had a job as a dog poop collector, it’s a really poopy job, but someone’s got to do it! Straight away he threw down his apron, plastic bag and shovel and left to come on the road.

Next it was the bass player, Patches Mendez, he was much harder to get onboard cos he is the mayor of Squaller’s Squib, a little village down the valley. I blagged him up, by suggesting it would help his very limited political appeal and make him look cool in the eyes of his constituents. You see, he banned some books in the local witch school because he didn’t want them to be upset about their ancestors being burned and drowned and the such, which didn’t go down too well with fae liberals. He agreed to join in the end, as he’s sure to get voted out next election. And so, Mystic Sandwich was coming together.

Next was the lead guitarist Sly Foxington, now he was one of the easiest to find because he’s a spirit, so we just séanced him up. He agreed to join cos haunting his ex-wife can get a little boring and her new husband makes him feel like he was pretty inadequate in almost all ways.

The final remaining member is very divaish as any good lead singer should be, Mr Singy McRockface, who’s a fawn, half man, half goat kinda thingy. He said he’d only re-join if we made sure he always walks upon rose petals and only give him blue M&Ms in a bowl in his dressing room. I agreed but with my fingers crossed cos let’s face it, I’m not doing that.

Now Mystic Sandwich is back together they can rehearse for about 27 mins, we’ve got a big gig in the morrow and a festival at night.

Getting the Band Back Together: Day Three

We woke up and hit the road, we have a big gig at the Woodland Stadium where we held The Woodland Games back in week 20 (click here if you missed it). It was packed to the rafters, it’s open air, so I mean if it had rafters that is of course. The gig was a resounding success and by the time we were done, we were already making sensational headlines. “The Beatles of the magical world” they called us “Mystic Sandwich the magical feast” was on the cover of Gathering Dust Magazine, and by the time we entered the tour bus to go to the festival we were mobbed by fans.

Next stop was Stock Fest, where we played in front of half a million woodland folk standing knee deep in a muddy field. The crowd was grungier than a back Packers under pant bag after a week in the mud I can tell you.

We got back to the hotel and while the boys partied, I caught 29 winks.

Getting the Band Back Together: Day Four

I awoke to the morning with people strewn all over the place, not wearing too many clothes. It appears as rock bands tend to do, they felt they no longer had use for the TV or the sofa, and now they’re broken and at the bottom of the swimming pool, 34 stories down, after having been thrown out of the penthouse window. To be honest, this is what I expected. Part of my job is squaring off the damage that the boys do with disgruntled hotel managers.

I checked, and low and behold, there we were, top of the download charts! Now I’ve heard of overnight sensations, but this takes the cake. 100 and 7 gazillion downloads in one day!

I slapped them all about to wake them up and rushed them to the studio to make an album. Of course, by this point the band were hardly talking to each other and hated sharing the studio. They did the sessions one at a time where they could. Patches Mendez was married and was learning to levitate to find spiritual awakening man, and that was when he wasn’t protesting in a bed with his wife.

Sly Foxington, was writing inane rambling songs with weird instrumentals that sounded like pots and pans being crashed together out of time. Apparently, that’s the “next evolution” of music, and I do agree if music is going to evolve into becoming unlistenable rubbish that gives you a massive headache.

Mr Singy McRockface, is now constantly wearing a cravat and beret and trying to be profound and deep every time he speaks, and finally Blubba O’Pancake’s all tiddly on the sweet nectar of the jiggly plant.

They laid down an album alright, called Mystic Sandwich: Squares or Triangles?, but it’s just so deep that no one could possibly understand it, unless perhaps they live at the bottom of the ocean. Naturally the album tanked but only because it was “way ahead of its time” of course.

The boys spent less and less time together, and argued when they did. They even came to blows at one point over some hotdogs and a cold cup of tea. The papers were all over it. “Hotdog Gate” they called it, cos every sensation has to be a gate of somekind as we know. The band’s PR, had hit rock bottom.

Well, the way this is evolving, I can’t wait to see what the morrow will bring.

Getting the Band Back Together: Day Five

The band split up this morning. Patches Mendez, has now joined a hippy commune and is living off the land but really, it’s a cult. Sly Foxington, sits around in a blue velvet jumpsuit all day, eating junk food and shooting his TV. Mr Singy McRockface, is launching a solo career which will undoubtably suck and tank, and finally, Blubba O’Pancake, stays locked inside one room of his mansion with only his protector, who’s as loopy as a leaping lizard’s lunatic Labrador, being his sole access to the outside world. It seems “they” are after him, whoever they is.

Well, I’ve gotta be honest, it was fun, but I’m worn out, or as like to say from time to time, I’m beater and more battered than a beatnik’s badger skin bongos, I’m catching 27 winks in this hotel and then I’m crowing it home in the morrow.

Getting the Band Back Together: Day Six

I crowed it back and was so happy when I made it home, that whole hotel life, living in and out of a suitcase, partying every night, never seeing the same town twice, no time for friends, or to appreciate home, it really takes its toll on you.

I haven’t heard from the boys since it all ended and now, I can get back to doing wizardy stuff. I wanted to know what we could have become, and now along with accidently ruining four lives (or deaths, in Sly Foxington’s case) along the way, I know that we would, and did make it. Just for a moment, we were the biggest band in the magical realm.

I was thinking of writing a fly on the wall thingy on the life and times of Mystic Sandwich but then I realised that flies can’t write, and my mother used to get mad if I wrote on the walls.

Getting the Band Back Together: Day Seven

Well, it’s been another crazy week and this time I’ve reached the heights and watched a band become a literal overnight sensation and take a mighty fall from grace, and I think that goes to show, music really is a metaphor of life.

They say a week is a long time in politics, but I tell ya, it’s got nothing on a week in rock n roll.

Luckily as the manager I’ve got a wee few shmeckles left over, about a whole suitcase full of money, I guess I should share it with the boys. For now, I’m done with rock n roll at least, until the comeback tour in 150 years.

I’m gonna write some cool stories for you now, I hope this week, the sunshine remains on your face and the wind on your back.